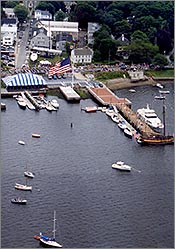 Nordhavn’s first-ever Rendezvous was an overwhelming success with 29 boats and an additional 9 sets of owners who came sans yachts taking part in the 5-day event hosted by Nordhavn’s Northeast sales office. It was the most Nordhavns ever assembled in one area at the same time. In all, more than 100 people converged on the Herreshoff Museum Marina in Bristol, RI for nearly a week of fun, education, relaxation and comradeship.

“The event more than exceeded our expectations,” said Jennifer Stern, director of marketing for Nordhavn’s manufacturer, PAE, and head of the Portsmouth, RI-based sales office. She said during the initial phase of planning the company had anticipated about half of the final number of boats and people in attendance. “This just shows how much Nordhavn owners enjoy their boats and each other’s company.”

The fete commenced Wednesday, July 16 with 16 of the boats pulling up dockside while the rest grabbed moorings. After move-in and registration, guests were treated to welcome cocktails and an address by PAE president Dan Streech who told the crowd how proud he was of the turnout. “The foundation of what has become the ‘Nordhavn phenomenon’ is built on the loyalty and passion of our existing Nordhavn owners,” he said.

The remainder of the week unfolded with a tour of Newport, a series of seminars covering topics from Lugger engines to liferaft survival to fishing from trawlers, and finally two evenings of dinner and dancing that rivaled the most entertaining weddings.

In fact, it was that spirit of camaraderie embraced by the owners – many of whom had never met other Nordhavn owners – that prompted PAE’s decision to make the Nordhavn Rendezvous an annual event.

L.A. Key said she almost didn’t make the inaugural affair due to a busy schedule. “I’m so glad I made it up here,” said Key, who with boyfriend Tom Mackey, own Nordhavn 46 Lucent. “There are people we met here who will be friends for life. I can’t wait to go cruising with them.”

Like most of the boats, Lucent made the trip from Florida gradually edging its way north. Only Maggie May, a brand new Nordhavn 55 that had just finished commissioning a couple of weeks prior, had to race to make it to Rhode Island in time specifically for the Rendezvous. Only a few weeks old, and already Andy and Susan Francis have put 1,200 nm on Maggie May. With two of the Atlantic Rally boats in attendance, many of the Nordhavns were well-traveled, giving PAE’s promotions coordinator Randy Robertson the ideal audience to announce the company’s forthcoming Distance Pennant program in which Nordhavn owners will receive special burgees based on incremental mileage they’ve accumulated since owning their boats.

“PAE…made this event such a smashing success,” exclaimed Wayne Davis, owner of Nordhavn 35 Envoy. “The generosity of PAE, and the intelligent planning of PAE staff combined to make the Rendezvous a whopping success and this was evident to all who attended.”

While the event’s main purpose was to celebrate Nordhavn owners, it also served to showcase the Northeast Office, its personnel and the area. Organizers kept Rhode Island as the main theme when it came to organizing tours (making sure to highlight the area’s rich history) and choosing favors. Each participating boat owner received a token from Rhode Island to serve as a memento of the Rendezvous and of the Ocean State’s hospitality. A raffle for some great giveaway items (from a pair of engraved mugs to a weather instrument donated by Imtra Corporation) generated over $4,000 to be donated to the Hasbro Children’s Hospital in Providence, RI.

A snapshot into the potential annual costs of boat ownership