An Eagle eye’s view of the Nordhavn Rendezvous 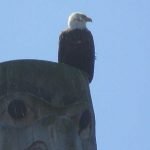 The first Nordhavn I spotted coming through Admiralty Inlet was, how cool was this, EVENTIDE, Nordhavn 35-01, the first hull of the first of the Nordhavn fleet to follow.  I didn’t pay that much attention until there was another – then another – until there were 22, all nested in my marina.

Their Leader arrived in the metal big bird and their spirits were high in anticipation of what his presence and wisdom would bring to his gathering of dedicated followers. 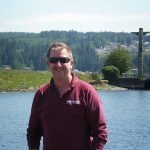 Later that evening – long after I’ve called it a day – they continued the celebration of the gathering by feasting on BBQ’d delicacies and spirits, laughter, stories and words of  allegiance to the Mother Ship.

Their accumulation of nautical miles was rewarded with signature Pennant flags to be proudly displayed as testimony to their long range cruising capability and interest in visiting distant ports of call. 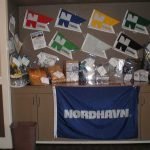 My Gullfriends kept a constant vigil and reported that the sounds of laughter reverberated along the dock. As quietly as they arrived – they departed my marina – my world –

I retired to my nest feeling that I had witnessed an event of camaraderie that is unique to – what I now know as – being part of the Nordhavn family.

I will keep watch for their welcome return.

we wanted to thank you for the great time at the Rendezvous. We were able to spend a few weeks in the San Juans before heading home to Portland. We are interested in purchasing more rendezvous shirts if there are any available. Two large and two extra large. We have a couple friends interested in the purchase of a new boat and we would like to encourage them to buy Nordhavn.

Ingrid and I sincerely enjoyed ourselves at the rendezvous and wish to thank you for an outstanding event. Everything was done so well – educational programs were superb, evening events great fun, food was delicious, and the people were best of all. Port Ludlow was the perfect location – owners and boats were moored close together – it felt like we had the place all to ourselves. We met a number of new friends and just loved spending time comparing cruising stories. To say the least, we were very impressed. Thanks so much again, for hosting the event. It will be remembered for a long time. PS: Also, please fwd to Barbara – I don’t have her email address.

Thank you all for an outstanding weekend. It was great meeting other owners and sharing information. We did not hear one negative comment the entire time. The food was excellent and the training sessions better. Have a great summer and we will see you in the Fall. Thanks again.

Mary and I would like to thank you, Don and Barbara for hosting the recent Northwest Rendezvous. We really enjoyed the event. It was fantastic to meet the other Nordhavn owners and learn from their experiences and Nordhavn “enhancements”.

It was also a pleasure to meet Dan and Jeff. It was great to see Dan was able to take the time to participate in some of the seminars…it was very helpful. I’ve spoken with Jeff for many years and this is the first time I met him.

Thank you for all your work.

PS. We’ll make sure we add you to the “Canadian Nordhavn Fleet” :-).

I’m sure you’ve heard from many rendevous participants but we’d like to add our deepest personal thanks for all the hard work the 3 of you (Don, Wilma, and Barb) performed in putting the event together. Anyone could see that it was no small task and your stress level must have been incredible, especially with it being a “first time”. While many of us were saying “Please, let’s have a rendevous”, it wasn’t we who had to pull it off, we only had to show up. That was the easy part! It’s too bad more boats couldn’t make the event but I suppose that at any given time of the year, a large number of boats could be expected to be out cruising. It was nice though, not too big and not too small. And lots of nice people willing to share information and tour their boats. We had a wonderful time.

Between our daughter, Kellie, and I, we took tons of pictures. Thought I’d share one of our most favorite shots. By the way, Don, how did you get some of those aerial shots of the boats?

Thanks so much again —