To call the first ever Nordhavn Southwest Rendezvous a success would be a major underestimation. 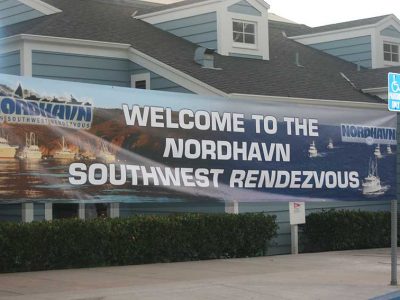 Hundreds of Nordhavn owners along with PAE staff and some of our best vendors/suppliers gathered this past weekend to share in a celebration of the one thing that binds them all together: their magnificent Nordhavn yachts. “It was a love-fest environment the entire time,” noted PAE president, Dan Streech, this morning.

It was the company’s third Rendezvous – ever – in just over a year. And quite simply, the major focus was on the owners. Not just a rendezvous for the owners, but by the owners as well. A rendezvous in Southern California had not been in the plans for 2009, but at the urging of N43 owner Kurt Antonius, the small, informal gathering had grown into the grandest party yet. It was capped off by special presentations given by some amazing Nordhavn owners who spoke about their bold, incredible journeys – the kind that only Nordhavn owners can talk about from experience. First to speak on Friday night was Ken Williams, as leader of the Great Siberian Sushi Run, who re-counted the months-long trip he and two other Nordhavns took from Seattle to Japan through the same waters made infamous on the Deadliest Catch television show. Ken was followed up by Sprague Theobald and his implausible adventure through the Northwest Passage on board his Nordhavn 57. Still reeling from three days quite literally stuck in polar ice, has given him a new, deeper understanding and appreciation for the frozen water to the point that he no longer drinks his beverages with ice cubes. 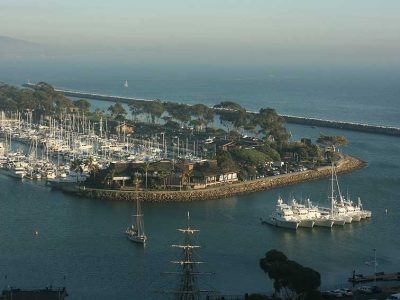 The riveting presentations left the owners buzzing as they returned to their rooms with eager anticipation for the next morning’s day of seminars. But not before more owner appreciation (outlined once again by the efforts of our adventuresome owners) was had in the name of the Distance Pennant awards. Fourteen new distance pennants were awarded at a ceremony hosted by Nordhavn Southwest salesman Jeff Merrill who estimated that the program has so far accounted for nearly 3,000,000 miles traveled by Nordhavns. (For a detailed update on the latest figures of the pennant program, click here.)

Saturday morning kicked off with informative seminars such as Safety at Sea demonstrations with Bruce Brown who teaches many safety at sea seminars and represents Switlik, Lugger Engine training with Bob Senter, and a primer on cruising Mexico by Capt. Pat Rains. Fresh from the previous night’s inspirational speeches, the crowd eagerly awaited the talk given by their Nordhavn peers, Eric and Christi Grab, who earlier this year completed their first circumnavigation. The interesting thing about the Grabs is that the first leg of their circumnavigation, which took them from San Diego to Nuka Hiva, was essentially their first voyage ever. They led a fascinating discussion on how a couple of novice cruisers managed to take their boat around the world safely, and have fun doing it.

Saturday night started off typically enough with a dinner dance and raffle – the proceeds of which went to the neighboring Ocean Institute, a marine education and preservation center. But the owner “love fest” continued when several Nordhavn owners spontaneously grabbed the mic, not in an effort of karaoke as was the case at the first rendezvous in Bristol, Rhode Island, but rather in a profession of thanks and profound gratitude given to the principals and staff of the company. “The praise the owners have for their boats and for the loyalty of the people who wear the Nordhavn hat – it was phenomenal,” said Rick Heiniger, who along with wife Debbie, are awaiting the arrival of their new Nordhavn 76 Eliana. Owner after owner shared with the crowd what their Nordhavn, and what the company, has meant to them. 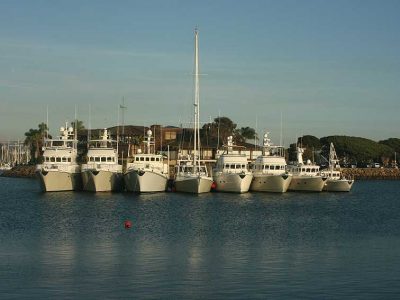 The Heinigers were recognized in their own right, not for any insane cruising miles they had logged – after all, they have yet to get on board their Nordhavn – but for another accomplishment of sorts. They are the only owners to have attended all three of the Nordhavn rendezvous. The couple, who hails from Missouri, does not live close to the sites of any of the three Nordhavn gatherings. So why the effort to go? “We see it as an educational experience,” said Rick, earlier today. “We got so much out of the first one (in Rhode Island) in terms of learning and interacting with people whom we could learn from, that it prompted us to attend the second one (in Port Ludlow, Washington)” where they figured it would be more of the same with different folks.

With the SW rendezvous, it was the chance to speak in person to some of the cruisers with whom they’ve been following via blogs. “Going in, we knew the stories of the Grabs, Ken Williams, and Sprague Theobald,” said Debbie. “But sitting there listening to them speak in person made it even more real. So much more than simply reading a blog. You can ask them questions and find out information that they normally wouldn’t put in a blog. They were so open and honest and willing to share.”

To sum up the weekend, condensed into three days down from the typical five, there were owners from 54 different boats in attendance with 13 boats having actually made the trip. Of these boats were an immense cross-section of Nordhavns from the semi-displacement Nordhavn 35 Coastal Pilot, to the Expedition Yachtfisher, the Motorsailer, and traditional Nordhavn trawlers.

The top-notch presentation would not have been achievable without the invaluable assistance of our coveted sponsors and vendors. Several of our top level vendor sponsors including Alcom, Lockton Insurance, Palmer Johnson Power Systems, Trade Wind Inflatables, Village Marine, Imtra, Raven Marine and West Marine had product and service display tables set pictures.)

Adds Debbie Heiniger: “It was really fun to see this side of Nordhavn. It’s incredible how much [the staff] believe(s) in their brand. This is a company that really stand behind its customers.”

Nordhavn named “Best of the Year”