2019 has been a whirlwind year, passing in a flash. (Don’t they all?!) But it has no doubt been one of the most jam-packed years in the company’s history with lots of changes, new beginnings, unfortunate occurrences, momentous occasions and always tons of excitement. Here, the annual month-by-month run-down of the events that had a significant impact on our year. There is a lot that happened in 2019, and we might have missed an event or two – feel free to add to the mix on our Facebook page or tweet us @NordhavnYachts your favorite moment. 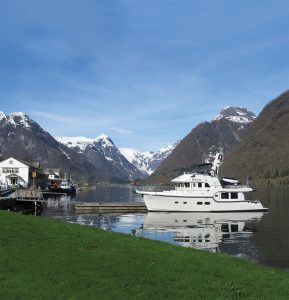 January – The year began with the awarding of the sixth Extreme Latitude pennant to James and Jennifer Hamilton, who returned back to Seattle, briefly leaving their Nordhavn 52 Dirona in northern Europe. The couple were presented their pennant at the Nordhavn Owner party at the Seattle Boat Show, having earned the rare and highly coveted burgee after visiting Svalbard, Norway. The Extreme Latitude pennant is awarded to any Nordhavn that has traveled above 66 degrees North or below 50 degrees South. The Extreme Latitude pennant is a sub-category within the Nordhavn Distance Pennant program where Nordhavn owners are awarded incrementally with pennants based on the number of miles they have cruised in their Nordhavn. Since launching the campaign in 2008, owners are approaching 7 million miles covered. Despite the approximately 600 Nordhavns delivered and cruising the world over (some truly expeditious cruises at that), to have only awarded eight Extreme Latitude honors punctuates the enormity of the achievement.

February – Nordhavn Yachts Sales underwent two major changes in a year that saw many changes to our sales arm. The first was a shift in the guard at the Southeast Sales office in North Palm Beach with former project manager Garrett Severen taking over the reigns as sales manager. A few weeks later, former California-based salesman Devin Zwick re-located to Anacortes to open a branch office of Nordhavn Yachts Northwest and teamed up with Harmon Marine in order to offer a full sales and service complement to the vast Nordhavn population in Anacortes. Both moves were huge steps in improving the quality of care and expertise offered to our clientele. 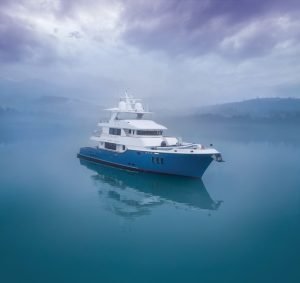 March – The Nordhavn 100 Serenity was named a design finalist in what’s arguably the most prestigious yacht design contest in industry: the World Superyacht Awards. (According to the website, “The BOAT International World Superyacht Awards recognize the ingenuity and craftsmanship of the most remarkable luxury yachts from across the globe. It is a globally acclaimed event, known for its credibility, prestige and glamour, distinguished from all other yacht awards.”) It was significant, not only in the recognition of Serenity as a superiorly designed, styled and executed yacht, but more so because it marked the third straight year a Nordhavn had been named a finalist by the judging panel, a rare feat for any manufacturer. Nordhavns have long been known as superior owner-operator vessels but the WSA recognitions offer confirmation as to the brand’s position in the superyacht world.

April – The PAE ownership group, consisting of Jim Leishman, Jeff Leishman and Dan Streech wrapped up their research/vacation on board the Nordhavn 5902. It put to the forefront what an amazing boat it is, perfect for families with its 3 stateroom/2 head configuration, open floor plan and the trademark Nordhavn overabundance of storage spaces. And perfect for those who are gun shy of displacement speeds, offering the ability to run at 20 knots. Each of the Nordhavn principals took the boat out for a Bahamas getaway and came back absolutely raving. Said Dan Streech after vacationing with his two children, their spouses and 4 total kids: “I love this boat. I truly didn’t know how I would feel about it but now I know. Now I get this boat.” The DNA of the Coastal Pilot is Nordhavn and can handle any condition in stabilized comfort. For those who want to really explore the country around them – but without crossing oceans – the Nordhavn 59 is the ideal boat.

May – The sea change at Nordhavn Yacht Sales continued with the relocation of the Northeast office from Portsmouth, RI, to East Greenwich, RI. The team, which took on new salesman Phil Besse, moved to a brand new office nestled in the waterfront district of East Greenwich, with lots of restaurants, shops and a service yard, Prime Marina, located steps away. The move dramatically stepped up Nordhavn’s presence in the Northeast and offers owners a base to operate from, with many conveniences – including TF Green International Airport – right around the corner. 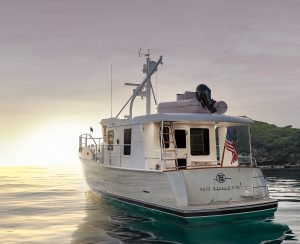 June – The next big thing from Nordhavn was announced. Ironically, it was the unveiling of the company’s newest design: the Nordhavn 41, officially the smallest model in the Nordhavn line-up. With the retirement of the Nordhavn 40 last year, customers were missing that small, entry level expedition yacht. The design and engineering team heard the calls and worked hard to create the perfect pocket passagemaker, combining all the experience they had with the world record-setting N40 and the rest of the modern line-up. The result is the Nordhavn 41 which is without doubt the most technologically advanced design we have come up with to date, thanks in part to the Computational Fluid Dynamics program provided by Vripack that was applied to the engineering of the hull lines. The little boat has already made a big impact with the first 7 hulls being sold sight unseen.

July – The start of summer began with an unfortunate turn of events marked by two brand new Nordhavn 68 hulls on the verge of launching, needing to be re-sold. A terrible tragedy caused Nordhavn 6835 to seek a new owner. This unbelievably gorgeous boat was the heart and soul of her gracious, excited owners. She will remain at the factory in Taiwan until a new buyer steps forward, a lucky buyer indeed, judging by these recent photos of her. She is modern and elegant, a 2+ year wait-in-the-making, but she can be someone’s new dream boat in a matter of a couple of months. Just days before, it was revealed that N6834, the victim of economics, would also need to be re-sold. (Happily, it seems this boat will have a new owner very soon.) It is unusual to have one unsold hull in production, but two is unheard of, and is the sort of thing that might be the beginning to the end of a company. This was an impactful point in our year, evidence that PAE is able to withstand such uncertainty. We want our owners to know when they buy a new Nordhavn, they are investing in a solid, resilient boat and company.

August – The first public viewing of the new N475 happened as Project Manager Dave Harlow explained the facets that make this such an exemplary boat. The video of this walk-through has garnered 41,000 views and was the general public’s first look of Nordhavn’s newest design. The first hull of this brand new model was beautifully executed and leads the way in Nordhavn’s new generation of designs.

September –Kristina and Atle Moe began the trip down to their home in St. Petersburg, FL, which they haven’t been to since 2013. It came after the culmination of a five-year journey cruising Northern Europe on their Nordhavn 57 Summer Star. Atle hails from Norway, and it may have played a part in their Scandinavian itinerary, but the couple covered the area – and then some – amassing knowledge and experience from their intensive cruise that began in the Netherlands. Along the way, they explored from England to Belgium, Denmark, Sweden and Finland, the French Atlantic coast, northern Norway, and then hit Iceland, Greenland, Newfoundland and Nova Scotia on their way back to the U.S. They enjoyed cruising in company with the owners of N68 Migration, took French cooking classes, and even earned themselves the very rare (even though this is the second mention of it in this article) Extreme Latitudes pennant with their stop in Tromsø, Norway at 69.65° North. They also managed to cover 23,500 nm during that time. What’s probably most impressive is that they did the majority of the trip without assistance. “We had a lot of guests, but almost all the overnight or multi-way passages are just with the two of us,” said Kristina. Favorite destinations were Norway, the Faroe Islands and the Swedish Archipeligo. Favorite memories were cruising with their Nordhavn friends and visiting with their Norwegian relatives. Next up for the couple will be some time in the Bahamas followed by a new adventure, TBD. Why did the culmination of Kristina and Atle’s trip make the list of significantly impactful events of 2019? It exemplifies the typical Nordhavn customer, and ultimately, the reason why we do what we do. 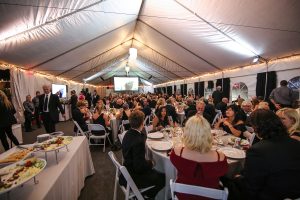 October – The greatest movie event the boating industry has ever seen took place October 12th. The Nordhavn Film Festival (NFF) was more dazzling, entertaining, and profound than any of us could have predicted. What’s more, the talent of the film directors far succeeded expectations – all of them winners who exemplified their love for Nordhavn and life at sea. The event was simulcast live and watched by thousands around the globe. The re-broadcast in its entirety has been seen 14,000 times on YouTube and all of the nominee videos has also been viewed thousands of times each. “We at PAE can’t stress enough that the Nordhavn Film Festival for us was a magical night in which Nordhavns and Nordhavn owners were celebrated in a way that befits the incredible depth of their contributions to the cruising lifestyle,” said PAE Vice President Jim Leishman. 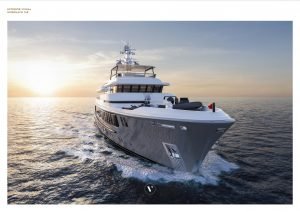 November – The marine world was buzzing with news of Nordhavn’s brand new model: the Nordhavn 148 expedition superyacht, which PAE announced at the Fort Lauderdale Boat Show. The project, a partnership with Dutch design firm Vripack, is the first metal boat for Nordhavn and presents the brand’s largest model to date. Designed to class with ice capability, the Nordhavn 148 is a true explorer yacht, meant for the most challenging conditions worldwide. This is the second collaboration with Vripack, who have designed interiors for the Nordhavn 80 project.

December – Nordhavns who give back. We often get lost in the huge cruising accomplishments of our owners, but what needs to be recognized most are the selfless acts, the generosity put forth and the heroic efforts of Nordhavn owners. There have been several throughout the year, but as we are thick in the midst of the giving season, we’d like to salute the Nordhavn 55 and 60 owners who this month have been in the Bahamas, attending to those still suffering since Hurricane Dorian ravaged their homes three months ago. It’s brought a little bit of holiday spirit to a community for whom the holidays this year would otherwise be an afterthought. These owners purchased their Nordhavns to cruise the globe; now they are using them to save the world.

So that’s 2019 in a nutshell – more or less. One thing that never changes from year to year is our gratitude to all of those who help contribute to the success of Nordhavn: the owners, guests, and crew who cruise near and far on their beloved yachts; anyone who posts photos and blogs, spreading the word about the brand; those who take part in forums and make Nordhavns a feature point of discussion; and all the people who read the stories and watch the videos about Nordhavn. We once again salute you, and thank you. Here’s to another year of Nordhavn memory-making.

Robb Report: Nordhavn’s 80-Foot ‘Pocket Superyacht’ Melds Exploration and Tradition. Now There Will Be 3 of Them.