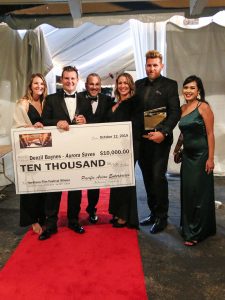 The Nordhavn Film Festival materialized into everything Jim Leishman dreamt it could be: a classy evening enjoyed by hundreds of Nordhavn owners who came together to celebrate Nordhavns  – the adventures, people and culture the brand represents – as interpreted by 18 amateur filmmakers, all of whom either own or crewed upon Nordhavns. In the end Aurora Saves was the big winner, taking home the $10,000 grand prize. But Jim, along with partners/co-owners Dan Streech and Jeff Leishman, will tell you that Nordhavn and anyone who has an interest in cruising, are the ultimate winners.

“I couldn’t imagine that the films would be this good,” said Leishman. “I’ve watched them over and over again.” The crowd of 200 gathered would no doubt echo that sentiment, each movie garnering tears, laughs, curiosity; every audience member was held captivated as each of the Top 10 finalist films was screened.

In the end, it was Denzil Baynes, a crewmember from Nordhavn 120 My Aurora  whose documentary about a single day in the life of the beautiful super yacht spent making several ocean mammal rescues, wound up earning the judges’ highest marks. Real life drama surrounded Baynes as he and his wife barely made it out of Japan in the wake of a typhoon to get to California and the NFF in time. “Something was telling me I needed to make the extra effort to get here,” said Baynes. In his acceptance speech, Baynes was especially thankful – and hopeful – that the message of ocean conservancy and marine life protection would reach the thousands who will wind up seeing his film. “It just so happened that we were fortunate to come upon these distressed animals when we did. Unfortunately Aurora  can’t be everywhere at every time.” 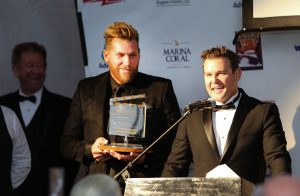 When asked how the crew had the wherewithal to break out the Go-Pros for the rescues, he and wife Kathleen, also an Aurora crewmember, said there are several cameras on the ship recording at all times – usually for the gorgeous scenery they encounter in their travels. This was just another side of cruising they felt needed to be documented, she said.

The other big winner of the night was Father to Son: A Legacy of Adventure directed by Adam Paskowitz which captured father-son adventures through the generations. It took home 2nd runner up as well as People’s Choice Award.

A recap of the winners:

2nd Runner Up: Father to Son: A Legacy of Adventure – Adam Paskowitz

The entire evening’s festivities and movie screenings can be viewed here: https://nordhavn.com/community/nordhavn-film-festival/.