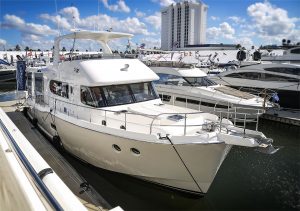 The biggest change at the Miami boat shows this year? In our opinion, it’s the shift in location for Nordhavn Yachts. For the first time in eight years, Nordhavn will be displaying at the Miami International Boat Show (MIBS), a switch from the Yachts Miami Beach location we’d adopted since 2011. Aside from that, there are a few new modifications that the producers have made to both shows that should – in theory – make the Miami show experience a lot more pleasant.

For years, it was only a small headache navigating between MIBS’ in-water location at Sealine Marina and the formerly named Yachts & Brokerage Show, which sat just across Biscayne Bay from each other, and MIBS’ land displays located at the convention center which lay equidistant between the two. But after MIBS was forced to relocate both water and land displays to the Miami Marine Stadium location on Virginia Key two years ago, going back and forth between the two shows became a nightmare, with transit times between the two venues closing in on 3 hours.

To help alleviate this, the now Yachts Miami Beach show has taken up residence at Sealine Marina. The downtown locale is a lot closer to MIBS on Virginia Key, and a heck of a lot more accessible than the ridiculously congested Collins Avenue site. And further simplifying things, the two show producers are teaming up to offer a joint ticket that allows entrance into both shows. To purchase MIBS tickets, click here. To purchase a combo ticket that will allow you access to both shows, click the link and scroll down to “Combo Tickets with Miami Yacht Show”.

Nordhavn will be displaying at slip 807 with the MY edition of the Nordhavn 59 Coastal Pilot. Come check out this gem of a yacht and speak with our staff, including PAE President Dan Streech, who will be available to discuss our entire line and reveal what’s on tap for 2019. We hope to see you there!

Cast your vote for the Nordhavn 41!

Soundings: At Home on the Water – Nordhavn 47

Cruising in the times of Coronavirus