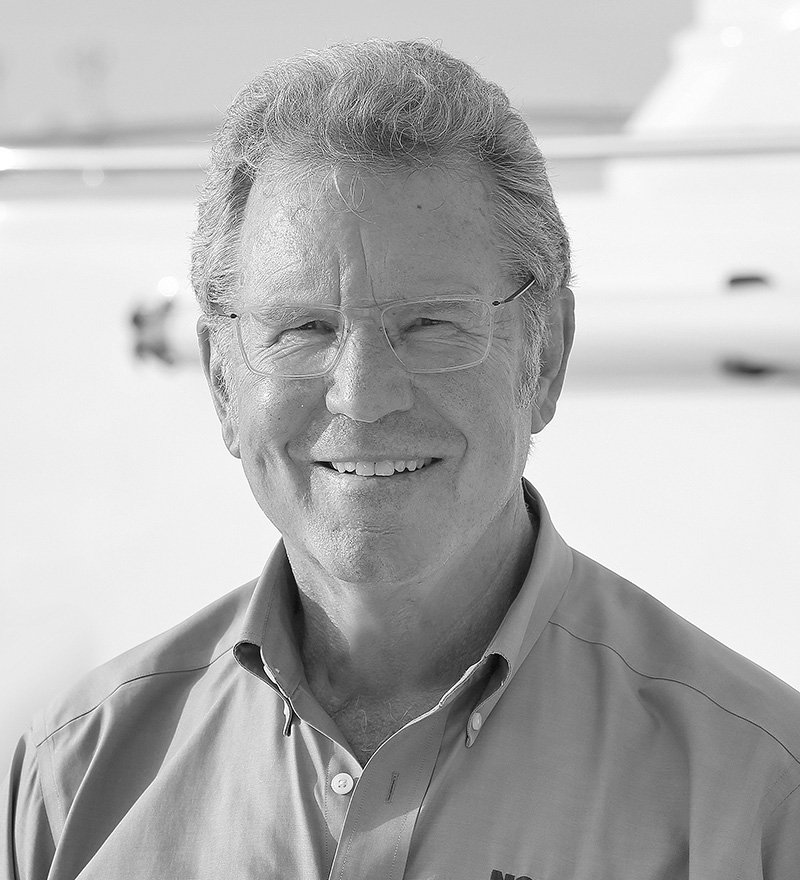 Daybreak is a Nordhavn 60 that has been extensively equipped for crossing oceans,
and has cruised through the south Pacific on her way to New Zealand.  She will return to Pacific Northwest in early 2019.

Daybreak presents a great opportunity to own a well-equipped Nordhavn 60 ready to for trans-oceanic passage making, as her owners move to a new, larger Nordhavn to accommodate a growing extended family.  With the lead-time for a new Nordhavn 60 nearing two-and-a-half years Daybreak would allow her new owners to enjoy the 2019 cruising season in the Pacific Northwest, and still have suitable weather for a trip to the southern climes for the winter season.

Of the Nordhavn 60’s built to date, most are not fitted with the full hydraulic system that includes powerful, continuous duty, bow and stern thrusters in addition to an anchor wash, windlass and emergency bilge pump.

Daybreak has been maintained to a high standard, so there would be little to add in preparation for cruising, beyond provisioning, in order to begin enjoying very self-sufficient, extended timeonboard.

The Nordhavn 60 is derived from the 55, the most popular model in Nordhavn’s history.

Enter the salon from the large aft cockpit through a Dutch door.  Moving forward the salon, galley, master stateroom, and forward guest stateroom are generally on the same level, from aft forward, with minimal elevation changes.

The current, original owners, have customized the standard Nordhavn 60 interior to include port and starboard settees built into the salon.  The starboard settee had to be long enough (7’-0”) for a tall person to stretch out for a nap now and then, and also serve well as a sea berth on passage if needed.

The galley is at the port forward end of the salon and is visually connected to it.  The light colored (“Kashmir White”) granite in the galley gives the workspace an open feel.

The master head is ensuite to the stateroom and features a generous size bathtub/shower.

All the way forward is the guest head with its shower large enough for a genuinely tall person.

The pilothouse is forward of the salon the stairs to starboard in the salon.  Passing through the pilothouse gives access to the guest stateroom should the master be occupied.

The galley has all the amenities that a cruising cook would hope for, and includes the following appliances:

The master bed is full king size, having been widened beyond the standard dimension.

The master has plenty of storage in drawers and hanging lockers for long term cruising or living onboard.   There are three opening ports with screens and an overhead hatch for light and ventilation.  Nightstands on either side of the bed have custom reading lights above them.  The bed is fitted with a custom mattress.

Opening portlights and an optional overhead vent hatch provide light and ventilation to the cabin.

The master stateroom has a head ensuite that includes a full-sized tub with shower.  The sole in the head is mosaic tile.  And the toilet is a Tecma. The vanity counter top is granite, and there are drawers beneath it.  Opening ports in the shower also provide light and ventilation.

The offset double berth in the guest stateroom has been widened 10”, making it a full king at the head, but still allows enough space for the nightstand inboard.  There is drawer storage under the bed, and overhead lockers port and starboard.

To starboard, a single bunk has been added in lieu of the standard desk.  There is a large volume of storage below it as well.

Forward in the space is an ensuite head with shower, granite vanity counter top and mosaic tile sole.

The guest stateroom is one to which you would be proud to show your most esteemed guests.

Below the sole in the guest stateroom is the forward bilge area.  This area takes full advantage of the 60’s considerable hull volume.  It can be used for storage, but it affords excellent maintenance access to the watermaker, hot water heater, fresh water manifold and Headhunter “Mach 5” pressure water pump, and back-up Mach-5 pump.

The pilothouse can comfortably accommodate an entire crew while underway.  Within its generous space are a day head – with Tecma toilet and vanity – as well as a sleeping “captain’s” cabin with a queen bed with custom mattress, settee and dinette table and drawer and shelf storage for books, charts and navigation equipment.

Two Stidd helm chairs add to the ease of operation by making monitoring of the electronics, eyes on the water, or conversation on night watches comfortable.

A Norcold drinks refrigerator is installed conveniently in the pilothouse also.

Just inboard of the steps up to the pilothouse are steps down to the utility and engine rooms.  The utility room is at the bottom of the steps and has the Bosch Axxis model washer and dryer.  A GE chest freezer is forward in the utility room and will hold three hundred pounds of Salmon.  There is still plenty of storage volume in addition to the space occupied by the appliances.

Nordhavn engine rooms are legendary for their space, organization, and sound attenuation.  Access to mechanical components therein is as easy as you would find on any boat.

Nordhavns in general are very comfortable boats underway.  They have proven to be or so many owners would not have completed the six million cumulative miles of trans-oceanic and other long distance passages that have been logged to date.  The centerpiece is the single John Deere 6081 main engine rated at 330 hp. The engine is connected to a smooth running five-blade propeller on a 3” Aquamet 22HS connected to a 3.9:1 reduction gear.

The main engine is configured with dry stack exhaust and a keel cooling system, consisting of a grid-like radiator on the outside of the hull.  The keel cooling system circulates the coolant mixture through the cooler and the engine jacket with a metal vane pump, eliminating the need for a raw water pump with its rubber impeller.  Raw water pump impeller failure is perhaps the most common cause of engine shut-downs.

The dry stack, keel-cooled system, along with Nordhavn’s gravity feed fuel system, create the most reliable engine system available.  In addition, the fiberglass fuel storage tanks are constructed using vinylester resin, which produces a tank that may well last the life of the boat.  Each of the tanks has a large inspection port for inspection and clean-out.  The supply pick-ups from the main engine room tanks are near the bottom forward corner of each tank.  They run to the central supply tank forward in the engine room.  The bottom of the supply tank is the lowest point of the fuel system, providing a concentrated pick-up point for the main engine and generators.  A sump in the bottom of the tank has a water sensor and drain valve installed in it.  The sump is the first line of defense against water and sediment that may have traveled to it from the storage tanks.  The use of ¾” diameter supply hoses from the storage tanks to the supply tank, and out to the main engine duplex Racor filters helps to ensure that there will not be an intermediate blockage before the fuel reaches the Racors.  If water were to accumulate in the supply tank sump, an alarm would sound in the pilothouse, allowing enough time for it to be drained off.

A Lugger L-944-D wing engine is located aft and to starboard in the engine room.  It functions both as a “get home” engine in the event of a main engine shut down, and also powers one of two hydraulic system pumps to produce full power for maximum output to the thrusters and other hydraulic system components.

The wing engine has its own shaft and Gori folding propeller for reliable auxiliary propulsion should it be necessary.  The Nordhavn philosophy is not to use a cross-linked auxiliary propulsion system for two reasons:  one is loss of efficiency in the transfer; and two, the cause of a main engine shut down may be due to damage or fouling of the main propeller.

Underbody
The hull skin is constructed of solid fiberglass without the use of core anywhere.  It forms a keel that is internally ballasted with 8,500 lbs. of lead.

The propeller shaft exits the trailing edge of the keel into a propeller aperture formed by the keel and the propeller. The rudder is connected to the bottom of the keel with a bronze rudder shoe.   The rudder is constructed using a stainless steel rudder stock with a stainless steel web welded to it, forming an internal “back bone” for the fiber filled resin core and fiberglass skins.  The rudder has a port in it to allow shaft removal without rudder removal, saving significantly on boatyard labor.  The resultant assembly is very strong and provides very good protection for the propeller.

Daybreak has 240-volt, 60hz AC and 24-volt electrical systems, with the flexibility to operate easily in 50hz environments while cruising worldwide.

An “iso-boost” transformer will deliver 120-volts to the service panel when only diminished 120-volt power is available.

A Xantrex battery monitor is installed in the pilothouse for tracking battery charge condition and amp-hour capacity.

The deck and exterior of the Daybreak is designed with many functions in mind.  Forward on the foredeck is a ground tackle area where the Maxwell 4000 hydraulic windlass is mounted.  The Maxwell 4000 will easily handle the 110kg. Rocna anchor and its 400′ of ½” high-test chain (re-galvanized in 2015).

Just aft of the windlass is a molded in low bulwark that contains mud and debris that may come aboard during retrieval of the anchor.  The area around the windlass drains through deck drains to the waterline rather than through the bulwark where it would streak the hull.  There is a freeman hatch installed next to the windlass allowing full climb-in access to the anchor locker.

The starboard side deck leads to the large cockpit.  The cockpit has molded module forward that includes a bank of drawers, a sink, and a magnificent ice bin, fed by the 600 lb./day Eskimo icemaker located in the lazarette below.  The ice bin has tremendous utility for icing down freshly caught fish, chilling drinks, and especially good for preserving fresh vegetables (useful for bartering for lobsters and other commodities).

The aft control station with engine, thruster, windlass and engine controls is located inside the cockpit on the forward face of the transom, next to the transom door with its stainless steel pantograph hinges.   The transom door leads to the extended swim platform with its staple rails and diver’s type ladder.

There are side rails on the bulwark caps in the cockpit which are handy for security, hanging fenders, or for mounting a variety of accessories, including rod holders and cleaning tables among other items.  The cockpit makes a beautifully functional fishing platform, especially in concert with the wing engine used as a trolling engine.  There is plenty of room for a table and chairs to enjoy the bounty of the catch.

Moving aft from the Portuguese bridge on the port side, steps lead up to the boat deck, which is 2’ longer than that of the Nordhavn 55.  Daybreak has an upgraded Steelhead SM 1500R davit that easily handles the 13.5’ center console Boston Whaler Dauntless tender.

Steps forward on the boat deck lead up to the flybridge with its commanding view.  The flybridge is an excellent vantage point to entering and leaving harbors and mooring grounds, and for simply enjoying a cocktail at sunset.  It has a crescent shaped settee and dinette table.  There is a folding bimini top to shade the flybridge.

DISCLAIMER Specifications are provided for informational purposes only. Data was obtained from sources believed reliable but is not guaranteed by owner or brokers. Buyer assumes responsibility to verify all speeds; capacities, consumptions and other measurements contained herein and otherwise provided and agree to instruct his agent/s to confirm such details prior to purchase. Vessel subject to prior sale, price and inventory changes and withdrawal from market without notice. 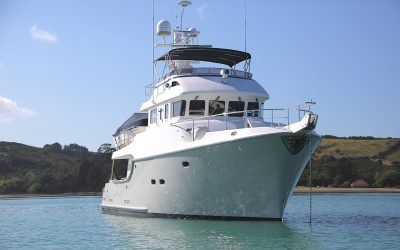 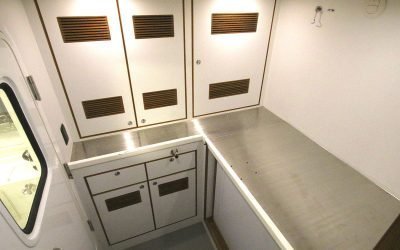 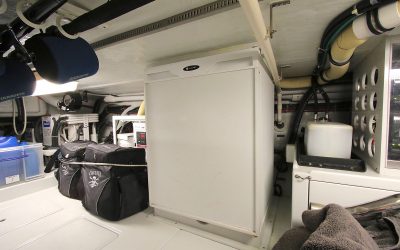 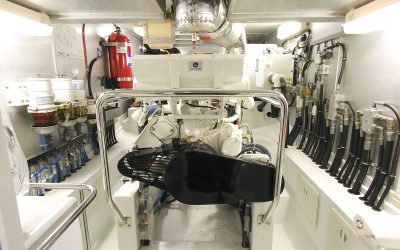 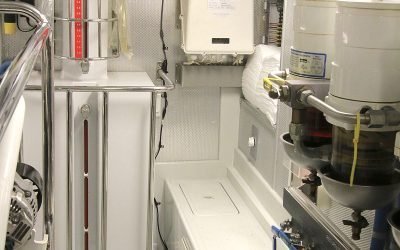 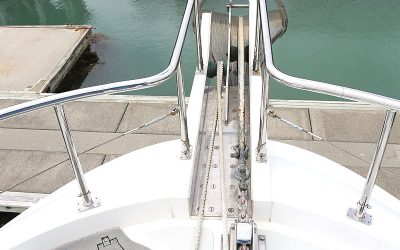 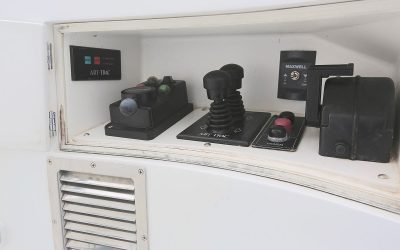 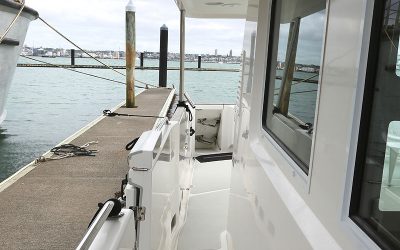 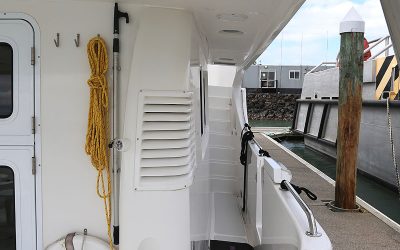 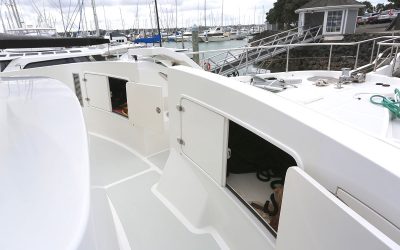 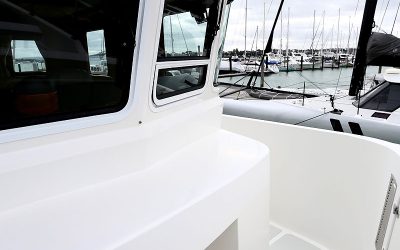 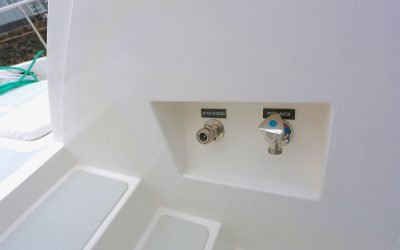