If there was a way to bottle a boat purchasing, outfitting and cruising experience for a time capsule and scribble “the 2020s” on it as a way of capturing a snapshot of the decade, Heather Brewer and Paul Bultema should do it. Talk about a slice of technology-infused history – from the way they met (dating app, of course) to the things that most concern them when cruising on their Nordhavn 43 (conducting simultaneous Zoom meetings). It sounds as though it borrows from science fiction, but theirs is a story of the modern day purchase and boating journey. 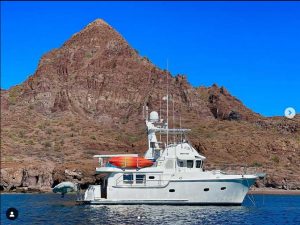 It wasn’t so long ago that folks would spend years researching the trawler lifestyle, climb aboard as many boats as possible, discover all the new-to-market equipment at boat shows, and choose itineraries based on cruising guides. When Brewer and Bultema decided they wanted to buy a Nordhavn 43, it was the summer of 2020. If they had stuck to those traditional methods of buying and cruising a boat, they’d likely still be sitting on their 31-foot SeaRay today.

The point of Brewer and Bultema’s journey is to not let the planning get in the way of the achieving. “A lot of people dream about doing something like this. Very few will actually do it,” said Bultema. The couple have found there are infinite ways to inject efficiency into the process of boat buying and ownership, and to make it mesh with the way people are living their lives today.

Bultema and Brewer met in February 2020, with only two dinner dates together before the pandemic hit. With offices temporarily shuttered, they immediately keyed into the opportunity to define where remote work could take place: they first tried to work together from Central America, but their five-day seven-country jaunt came to an abrupt halt after they were locked in a hotel in Cartegenia, Colombia with a guard stationed at the front gate. It was time to go home.  Back in Seattle, they gambled that their feelings for each other would be strong enough to survive passing time on a 31-foot boat. Since both held demanding job roles – Bultema, a Workforce Development Organization Director for Amazon Web Services, Brewer, a management consultant for Price Waterhouse Coopers – it meant withstanding phone calls and Zoom meetings and life in general in close quarters. On days off they tooled around the San Juan Islands to escape the realities of the world for a while, hoping that the Canadian border would open. It did not. 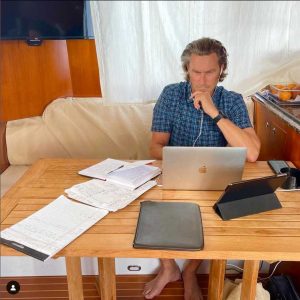 Like many others during that summer in 2020, Bultema saw boating as the ultimate antidote to lockdown, but he yearned for sights beyond the Pacific Northwest. With no ties to a workplace or immediate family obligations, and no end in sight to COVID, he and Brewer envisioned working remotely while exploring the world. 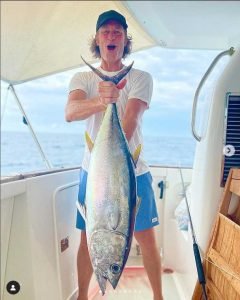 From the cozy confines of his SeaRay, Bultema stalked online boating sites for used Nordhavns. Unfortunately for him, the market was white hot so a brokerage model that was an exciting prospect one day would the next day be a letdown, marked with the words “sale pending”. After four months of repeated disappointment, Bultema spied a new listing, a 2007 Nordhavn 43. He told Brewer he needed to buy the boat, then and there. No stepping aboard to see it. No getting a feel for the layout or a sense of whether it was too much boat. She encouraged him to pull the trigger. “Don’t overthink it,” she told him.

Bultema describes himself as a “big risk taker” but considering his methodical approach to things, it’s evident he’s a big calculated risk taker. He knew the reputation of the brand. He knew this boat checked the many boxes on his wishlist. The pandemic provided a unique window of opportunity to work and travel, years before retirement, and he knew losing out on yet another Nordhavn and thus setting himself further back in his plan would be devastating. With him in Seattle and the boat in Florida, he made an offer to buy on the spot. The thing about leaps of faith is that they are at once simultaneously exciting and frightening, and Bultema has a favorite motto he likes to quote in support of taking them. “You protect the down side and figure the up side will take care of itself.” In this case, if things didn’t work out, a Nordhavn 43 during a pandemic was an easy sell.

This is how you outfit a boat in the ‘20s

The old school approach owners use to outfit their boats is by talking to other owners, talking to suppliers, reading articles, seeing the items in person, wandering through the boat to determine what is missing. Brewer and Bultema are decidedly new school (certainly influenced by COVID’s restrictions.) In the winter of 2020, Brewer went through the SeaRay and made an inventory of everything on the boat they either used or didn’t have and needed. She then ordered everything off Amazon and had it shipped to a hotel in Florida before loading it onto the Nordhavn after closing. Her partner’s job notwithstanding, ordering from Amazon seemed like an obvious choice. “They have everything,” Brewer noted. “And I wanted to keep it classy, but not fancy. The goal was not to over provision and to get it done as soon as possible.” When they arrived in Vero Beach, just before Christmas, they were greeted by two palates of boxes. “I haven’t had to buy anything except food in two years,” she says proudly.

While Brewer got busy unpacking boxes, Bultema addressed the single component that was most vital to making the whole dream work: a cellular and satellite communication system. “We needed enough bandwidth that would allow two simultaneous video chats to happen,” he said. Corners would not be cut. They invested in a Pepwave cellular system and a KVH 7-Satellite System. A six-week install later, and they were able to tele-conference their hearts out in the open ocean.

Cruising in a digital age

The Nordhavn 43 was only their second boat with the SeaRay being the first. To put it bluntly, Bultema and Brewer were not expert skippers. “We wanted to go for it, but safely,” said Brewer. So they hired a captain who would teach them how to operate the boat while they cruised – your typical on-the-job training. The couple weren’t ashamed of their beginner status and in fact, embraced it. They documented their training process on their Instagram channel @workingreboatly. “We decided to be open with our journey and how we had to acknowledge and overcome our fears,” and offer inspiration to others who have a dream, Brewer said. 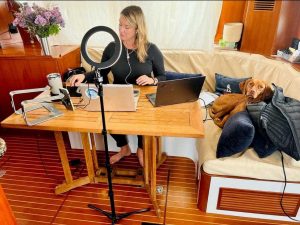 The goal was always to bring the boat back to Seattle. To do it, they would need to continue working throughout the 10,000 nautical miles it would take to get there. At sea they used satellite to communicate but it was costly so ports of call were often based on whether there were marinas with good wifi service. But claiming to have good wifi and actually having good wifi were two entirely different things, they discovered. “Not one marina – even in the U.S. – had wifi sufficient for Zoom calls,” lamented Brewer. The SAT phones were always reliable but using them got very expensive.

Throughout their travels, Brewer and Bultema continually had to triage connectivity, as each country had a different way to buy and install cellular and data cards.  Most cards were activated on a burner phone and they used data SIM cards for their dual Pepwave LTE cellular modems. Sometimes they could recharge cards online and, in many instances, had to do it in person. Their cellular modems also had to be configured for each country in order for the cards to work. It was the single, most difficult challenge on the trip as they worked remotely.

Depending on their location and the amount of bandwidth needed, they would check into a hotel and book a room, simply for the purpose of using the wifi. They found it was cheaper to pay for a room than pay for the satellite usage. On average, the couple spent between $3,500 and $4,000 per month on telecommunications costs. “For us, it was table stakes in order to do the trip. We had to work,” Brewer said. 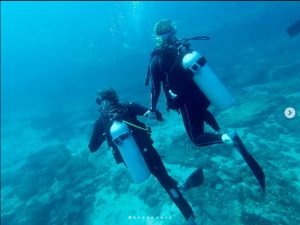 All this is not to say their experience has been any less adventurous. In their minds, they didn’t miss out on remote anchorages or certain locales due to their internet needs. Both Brewer and Bultema rave about swimming with dolphins in the middle of the ocean, the thrill of traversing the Panama Canal, mixing with different cultures, standing beneath waterfalls in Costa Rica and becoming self-sufficient boat handlers. “It by far has exceeded what I’d imagined,” Bultema said.

The upside of communicating without the use of technology was not lost on them either. Brewer re-tells a story of when the couple were trraveling from Cabo San Lucas, Mexico back to the U.S.. They were in Bahia Sebastian Vizcaino and it was 3am, and they were experiencing some of the worst weather of the entire trip – winds at 42knots and 12’ waves, and they were 30 miles from land.  One of the boat’s fuel injector lines had a minute hole in it and it was misting diesel fumes all throughout the engine room.  After three tries to fix, they finally stemmed the flow with tin foil, a cut out from a silicone ice cube tray and multiple zip ties.  This fix got them to anchor in San Quintin Bay the next morning, but they wouldn’t be able to leave unless it was fixed.  Texts into Devin Zwick, Nordhavn’s Northwest Sales Manager and to Northern Lights and all-around engine room pro Bob Senter, helped to provide some mechanic suggestions in the region. “The Nordhavn family is incredibly accessible and helpful,” said Brewer, “a real differentiator from our experience, and broad, recurring industry reputation.”

The duo went to shore to seek help and eventually came upon a local fisherman. Fluent in Spanish, Brewer explained the problem to the fisherman who had a friend he thought could help, but by this time the waves were too high for them to return to the N43 in their dinghy. The fisherman loaded the dinghy onto his truck for safekeeping and went to visit his friend. A little while later he returned, with his own panga, and the necessary part from his friend’s John Deere tractor. The three of them boarded the panga, and he delivered them to the Nordhavn to replace the fuel injector line.  The next day, the waves were even larger, and the fisherman loaded the tender onto his panga and risked his life to deliver the tender to the Nordhavn, so the crew could leave intact.  “The moral of the story…,” said Brewer “…the locals usually want to help, and it usually leads to a wonderful cultural experience.” No Google searches necessary. 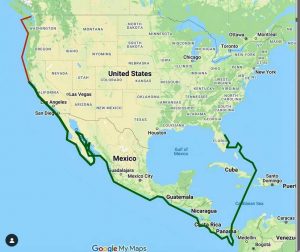 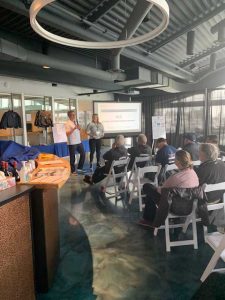 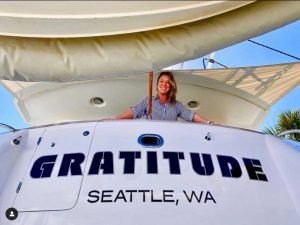 When Bultema thinks back to the beginning of the process and the “Aha!” moment he had about continuing to work while seeing the world by boat, he gets emotional. He and Brewer use the word “gratitude” a number of times when they discuss all that they have seen and accomplished. Aptly, it’s the name they have given their Nordhavn 43. Gratitude. Today they sit on Gratitude in Canada’s Gulf Islands, having recently come from the Nordhavn Owners Rendezvous in Victoria, BC, where they were featured speakers, tapped for their experience of having traveled so far and so scrappily in their Nordhavn.

“We are working to live and it’s totally doable,” said Bultema. “We want to explore the world, and we’re doing just that.”