Celebrating in the time of Coronavirus: honoring N55 owners Alison and Kevin Jeffries 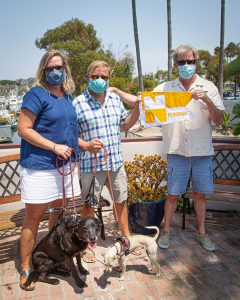 For Alison and Kevin Jeffries on Nordhavn 55 Red Rover, last Wednesday marked the recognition of the end of the Taco Run, but the beginning of something new. Of course, what exactly that “something new” is remains to be seen, thanks to the upheaval and uncertainty that Covid has presented. With a firm we’ll-cross-that-bridge-later attitude, the couple whooped it up with PAE staff who gathered – six feet apart -not only to celebrate the Jeffries on the culmination of the Taco Run rally they conceived and executed, not only on earning their 15,000 nm Distance Pennant, but for being great customers.

The Jeffries are the kind of brand ambassadors every manufacturer wishes they had. Staunch supporters who vocalize their loyalty through blogs and on social media, who embrace and encourage enthusiasm from other owners, who lead by example as well as by, well, leading. That is to say, they do not shy away from organizing events that showcase what being a Nordhavn owner is all about. Quite frankly, when you meet. Kevin and Alison, you want to be their best friend. You want to be in their clique.

The funniest thing about that sentiment is that both Kevin and Alison will tell you that in their pre-Nordhavn life, neither one was much up for the party scene. Making small talk was a chore and staying in always seemed the better option. Something happened though when they bought Red Rover. Suddenly they found themselves among people who were like them, anchored together by the commonality of their Nordhavns.

Over nearly four years of N55 ownership, the Jeffries were responsible for hosting boat show after-hours parties, creating the Nordhavns Around Puget Sound (NAPS) rendezvous, and then the Taco Run rally last fall in which seven Nordhavns converged in Dana Point, CA from various places along the U.S. west coast (the Jeffries came from Seattle) and traveled together down the Baja peninsula and into various ports in Mexico where they wintered and spent all of Covid quarantining. Earlier this summer the group disbanded and the Jeffries headed back north.

While this was going on, the Jeffries crossed the 15,000 nm threshold on their Nordhavn 55. An impressive milestone for the duo.

When word spread they would be stopping in Dana Point en route to returning Red Rover to her home port in the PNW, there was no question there would be a celebration. Without doubt, proper fussing over their mileage accomplishment and their Mexico rally success and the attention they have brought to Nordhavn needed to happen. Besides that, PAE’s headquarters hadn’t seen a good shindig in six months what with Coronavirus forcing a moratorium on parties. “If there was any reason to get the gang together for a party, the Jeffries definitely are it,” said Becky Peters who oversees the in-office experience for clients at PAE. “The socially-distance pennant award ceremony is a first! But honoring great Nordhavn clients, that’s our specialty, and we’re not going to let a pandemic get in the way of it.”