Nordhavns are purchased and sold internationally all the time, but making deals across different countries isn’t as cut and dried this year. In fact, a Nordhavn 86 owned by a New Zealander and based in France was just sold to an American buyer, who was blocked from setting foot on the boat.

Thanks to COVID 19-related travel restrictions, Nordhavn salesman James Leishman had the tricky job of navigating the sale made completely sight unseen and without a survey or seatrial.

“It was definitely a risk doing it this way,” Leishman said of his client’s decision to take a leap of faith and purchase the yacht as is-where is. “But in the end my client gets the boat he’s always wanted. He’s a happy customer.”

Playing a role in the transaction was the client’s current boat, a Nordhavn 76. He’d owned the boat for a couple years and cruised extensively around both coasts of North America. His experience with the brand is what gave him confidence to take the plunge with the blind purchase of the N86, formerly called Aroha.

With consideration of a move toward a larger Nordhavn taking a serious turn, the client let Leishman know he wanted to sell his N76 named Celtic Pride and at the same time take a stab at Aroha. Timing was serendipitous, both deals coming together practically co-incidentally. Leishman partnered with colleague Don Kohlmann out of Nordhavn’s Seattle office on the sale of Celtic Pride, which never officially hit the brokerage market. Within days of agreeing to terms on the 76, word came that the seller of Aroha had accepted the offer for purchase.

“(Limitations caused by) the Coronavirus ha(ve) absolutely made boat selling and buying more challenging,” Leishman said, “but a good broker will get creative and make an increased effort to see a deal through.”

It seems for the time being, these types of blind faith purchases may be the norm when it comes to pre-owned listings – not just internationally but domestically, too, since traveling within the U.S. isn’t always feasible. As was the case with the Aroha purchase, Celtic Pride’s buyer bid on his boat without having actually seen it in person. Remarkably, Leishman is working on another two-boat transaction whereneither buyer had been aboard the boat they were offering on. His clients on the former Nordhavn 55 Isla Z, based in Alaska,wanted to make a run at Nordhavn 63 Vincere in Florida. Flying cross country wasn’t possible for the couple, but they trusted in the product and in their brokerage team. Leishman knew his associates at Nordhavn’s southeast office vouched for Vincere’s condition and he advised his clients accordingly.

With the N63 locked up, Leishman went quick to work on selling Isla Z. Devin Zwick from Nordhavn Yachts Northwest in Anacortes had clients who’d been hunting for the right N55. By afternoon’s end –and once again, without any showings – a deal was put together.

The internet and online boat shopping sites have certainly helped enable folks to cast a much wider net when it comes to searching and selling, but that only gets you so far especially during today’s restrictive climate, offers Leishman. He knows from experience that a solid broker with a strong network behind them can find ways to cleverly deal with sticky situations. “You align yourself with the right people who you trust and it makes a seemingly impossible task doable.”

Yesterday morning Leishman boarded his client’s Legacy 500 in Orange County, CA and the two flew to Fort Lauderdale to examine Aroha for the first time. As if on cue, they circled directly over the Dockwise ship carrying the newly purchased Nordhavn 86. “There’s your new boat!” Leishman said, pointing out the cockpit window at the beautiful Nordhavn secured to the deck.

Upon offload, the 86 was brought by her new crew up to Nordhavn’s commissioning hub in North Palm Beach, FL. There’s work to be done on Aroha but she is a gorgeously crafted Nordhavn, stunningly equipped, and in no time will be out cruising with her new owners. 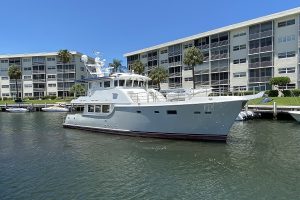 The new owners of Celtic Pride, who hail from Hawaii, eagerly await the arrival of their new boat. As of this afternoon, the N76 is about 24 hours out of her new homeport in Honolulu.

N63 Vincere passed her survey and seatrial with flying colors last week. Her new owners will spend this winter exploring the southeast and the Bahamas and then eventually take her through the Panama Canal and on up to Alaska.

The sale of Nordhavn 55 Isla Z is scheduled to close today. Her owners reside in the Pacific Northwest and will eventually be bringing their boat up the west coast.