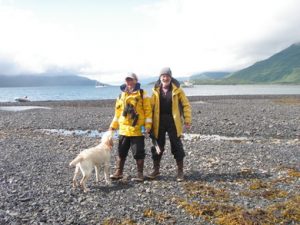 Just because you are thinking about putting your global itinerary on hold doesn’t mean you can’t have the adventure of a lifetime here at home. Nordhavn 52 owners Josh and Natasha Tofield have spent the better part of the past decade exploring Alaska, and they can’t imagine going anywhere else, pandemic or not. “We’ve been here for so long but we’ve barely scratched the surface,” said Natasha when we first interviewed her. Five years later, the sentiment still stands. The wealth of wildlife in the Alaskan and Kenai Peninsulas means every day is a new adventure. “We have continued to explore and find new anchorages to experience,” said Josh earlier this week.

Since taking delivery of their N52 Samba in 2012, the Tofields have owned and operated her just the two of them. Prior to that, they owned a Nordhavn 40 and between their two boats they have amassed 35,000 nm only cruising between Seattle and Dutch Harbor. In light of the uncertainty that lies ahead for American cruisers, it makes Alaska a truly viable destination for the coming season. Currently all boats going to Alaska must quarantine for 14 days, but after that, there are miles of nature to be explored and enjoyed. The hope is that social isolating restrictions will be lessened by this summer but whether or not avoiding big crowds is still the directive, Alaska would be an incredible place to have an adventure.