For Nordhavn salesman, it was two missions accomplished 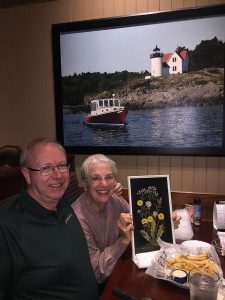 Last week Dave Balfour, a Nordhavn salesman out of the East Greenwich, RI office, flew to PAE headquarters in Dana Point, CA to help his clients map out a contract on a new Nordhavn 52. They sea trialed a boat, talked specifics and timing. It was a successful meeting by all accounts. But Balfour’s business wasn’t finished. There was still another mission to be accomplished.

“Dave B”, as he is affectionately referred to at PAE, needed to track down an old family friend who his parents had lost touch with over the decades. He had a sentimental family heirloom that he was desperate to give to her, its rightful owner.

As a kid growing up in Rhode Island, Dave B listened to stories his dad would tell about the time he spent in Germany while serving in the U.S. Army in the 1950s. One story revolved around a young girl who lived across from the U.S. Army housing where Dave’s parents stayed. The girl, called Amelia, wanted desperately to better her English and hoped she could convince the American serviceman to teach her some conversational English. Happy to oblige, at first because of the distraction it provided during active duty, Private Balfour would pop by each afternoon and teach young Amelia and her siblings some new English terms and phrases. Balfour and his wife developed a nice friendship with the German family and he was generally delighted in the progress Amelia made with the language.

Inevitably time passed and Private Balfour’s tour of duty came to an end. Amelia, so grateful for the hours he donated helping her with her English, had crafted a needlepoint as a way of saying thanks and goodbye. The Balfours, touched by the girl’s generosity, cherished the needlepoint. It was hung prominently in their new house in Rhode Island, and was the jumping off point to many stories told to Dave and his sister. 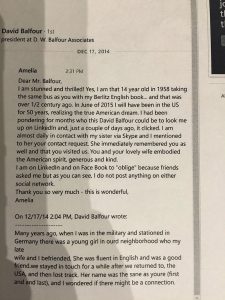 The Balfours tried valiantly to stay in touch with Amelia and they did manage some letters to each other, but eventually lost touch. About five years ago, on a whim, Mr. Balfour Google searched Amelia and as luck would have it, landed on the correct email address. She was stunned and thrilled to hear from him: “You and your lovely wife embodied the American spirit, generous and kind,” she wrote. They emailed back and forth and he was surprised to learn that she had moved to California. “I have been in the U.S. for 50 years, realizing the true American dream.” In his 80s, and she having just turned 70, they wrote off the chance of a visit, content with online messaging.

Dave’s mom passed on years ago, and back in November, Dave B said a final goodbye to his dad. As many can relate, he’s spent the past several months cleaning out his childhood home that his parents had owned for 50 years. Still hanging on the wall was Amelia’s needlepoint. Dave knew that if he had the chance, he would return it to her.

And so, after wrapping up business in Dana Point last weekend, Dave drove to nearby Hacienda Heights, needlepoint in hand, and made the face-to-face connection with Amelia that his father wanted so dearly to make happen but couldn’t. Dave B listened to the same stories, this time from the former young girl’s perspective, and had an even greater appreciation for the man whose giving heart broke through language and political barriers.

In yacht sales, and in life, for Dave B, last week marked a job well done.