Great from the get-go 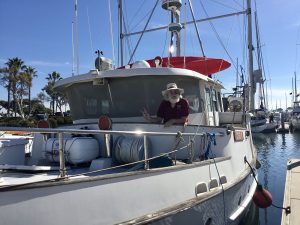 Lots of companies – in fact, lots of people – will say that you shouldn’t judge them now based on how they were then, back when they were first starting out. They’ll tell you they didn’t have the experience and knowledge they’ve amassed since, or that they needed time to learn from mistakes. But Pacific Asian Enterprises (PAE) is actually OK if you judge us based on when we first started out. Go ahead and judge us based on our very first Nordhavn: 46#1. Sure our ability to space plan might have improved over the decades, production is more efficient and taste levels have elevated. But we wouldn’t change a thing about that first Nordhavn. She set the standard for a new generation of cruising. She remains the muse for every single Nordhavn that has come after her. And she continues to be an example for every passagemaking power yacht ever built, purpose-driven and cranking the miles away as reliably as if she was born yesterday.

We caught up with George Barnard, the current owner of Nordhavn 46#1, now called Water Brother V (taken from Robert Heinlein’s novel Stranger in a Strange Land), whose posting of miles traveled on the Distance Pennant Program last month is what toppled the mileage registry over the 7 million mile mark. Barnard’s post – and subsequent reward of 7th-million-mile swag – was complete luck of the draw in a sense, but like the Lottery touts, you can’t win if you don’t play. Barnard admits he hadn’t posted any of the miles in the time he’s owned the boat because he’s not one who likes to make a fuss over himself. But he thought it would be an honor – and a hoot – if his miles were the ones to achieve the milestone. He was genuinely surprised to learn his post was, indeed, the difference maker. “Good old number one!” he laughed, referring to the nickname PAE President Dan Streech has taken to calling the boat. 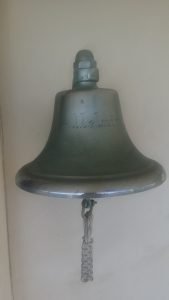 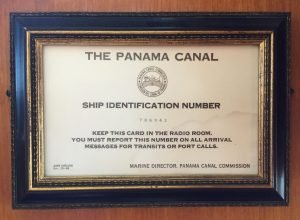 Barnard is the fourth owner of the 1989 N46, and her history is well-preserved on board. The original ship’s bell, inscribed with her original name Alleluia, is on display up in the pilothouse hanging next to the aft sliding door. Going up the steps to the pilothouse, tucked in a frame on the wall, is the original Panama Canal Identification Number from the time she traversed the Canal to get to her new home in the Gulf of Mexico with her second owner as M/V Gannet. The boat had spent much of its time in the Mediterranean with the third owner and under a third alias, Frog Kiss. While in Turkey, her tender on Frog Kiss was outfitted with a Yamaha 15 HP 2-stroke engine purchased back in 2012, which remains today. “The best dinghy engine ever made,” said Barnard.

Frog Kiss was shipped from the Med to Florida and made the 5 1/2-day passage up to Newport, RI, where Barnard purchased her. “I paid within a few boat units of what she sold for when new,” he said, adding he normally “would never have purchased a hull number one of anything.” But due to PAE’s legacy with the Mason sailboat brand and Nordhavn’s track record, “it was a no-brainer.” 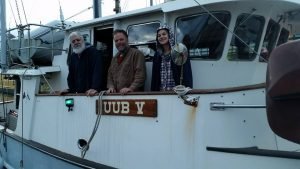 Judging from the engine hour meter on the original Lugger, which sits at more than 8,000 hours, Barnard estimates 46#1 has close to 50,000 nm on her. He contributed to those hours and miles with his own travels, most of which he says were accomplished single-handed to places like The Bahamas, Nova Scotia, Alaska and La Paz, Mexico. “I haven’t spent more than a few days ashore during these past six years,” he said. One exception was on a passage from La Conner, WA up the Inland Passage and around Admiralty Island where he crashed the Nord2AK party. He flew his step daughter and her family out from Maine to join him on the ensuing passage to Ketchikan. “I have hopes of my grandchildren someday telling their grandchildren about their trip to Alaska,” he recalls.

Despite being a lifelong boater, it was his Nordhavn that enabled him to cross several items off his bucket list, he said. “WB V [has given] me six terrific years of this life.” Hopefully Barnard has several more terrific years left in him because you can be certain that 46#1 does. A Nordhavn now is as good as it ever was, and it’s always been awesome.