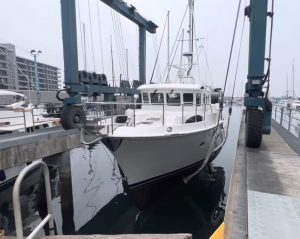 Following the very busy Fort Lauderdale Boat Show of a few weeks ago, the widely agreed sentiment is that the dried up brokerage inventory of the past 24 months is finally starting to replenish and recover. That may be the case for some brands, but at Nordhavn, new listings are still hard to come by, and when they do pop up, they’re usually not there for long. But you don’t have to be a slave to the brokerage market.

Case in point: the recent sales of Nordhavn 43 Jules and Nordhavn 63 Isla Z. What’s that? Those boats never appeared in your Yachtworld feed? They wouldn’t have because they never made it to market.

Tom Gilbert, one of our newest salesmen up in our Northwest office in Anacortes, WA, had been working with folks since the summer on a boat in the 43- to 47- foot range. He showed them the Nordhavn 43, 47 and 475 and ultimately they decided on the N43. “I took them aboard a brokerage N43 they considered making an offer on, but it just wasn’t the right boat for them,” he said. “Ultimately they passed.”

Soon after, Gilbert’s colleague in California, James Leishman, sent out an email noting he had a beat on an N43 that would be available. Leishman had been having conversations with his clients about their interest in moving up to a larger Nordhavn. He sent along a description of the N43 Jules along with his personal backing to his fellow Nordhavn sales reps. “This boat is in like-new condition,” he told them.

Without haste, Gilbert sent the details to his clients who – a brief discussion later – placed an offer on the boat sight unseen. Their first chance at getting aboard Jules was at the seatrial and survey. “My buyers knew if anything major came up, they could back out,” said Gilbert. “But James accurately presented just how good of shape the boat was in. They were very pleased.” The boat closed a few weeks ago and now the happy owners are adding some upgrades (including a stern thruster), changing out the soft goods, and planning their itinerary.

“Knowing your buyers and knowing your sellers is the key to this business,” says Leishman, who tops Nordhavn’s team in sales this year. “Not doing so will cause you to lose out (on sales).” Leishman makes it a habit to stay in weekly communication with the other 17 members of the Nordhavn international sales team for scenarios exactly like the one with Jules. “The great thing about (Nordhavn’s) sales group is that we know our boats so well. If one of my colleagues tells me about an under-the-radar boat that’s in great condition, I’m going to take them at their word and relay that on to my client. Boat buyers and sellers who work with us need to realize that they have an entire team behind them.” 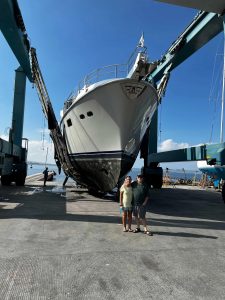 Leishman was his own greatest resource when it came to selling Nordhavn 63 Isla Z. He randomly rang up the owners of the boat one recent afternoon simply to touch base with them and they revealed they’d been thinking about a new construction Nordhavn, and, they wanted to be land-based while they waited out the build process. Leishman’s radar went off as he considered a client he’d been actively working who was searching for a used N63. “I think I already have a buyer for your boat,” he told his clients. In less than a week, he had the boat sold.

“Not to sound self-serving,” Leishman says with a laugh, “but it is important to have a broker who has their finger on the pulse of the market. What good does it do to have a broker who watches to see what pops up on Yachtworld? The client is probably already doing that.”

This afternoon, there was an email that went to the entire sales team at Nordhavn from Southeast Sales Manager Garrett Severen. “I believe one of you was looking for information on a Nordhavn [certain model] the other day,” he wrote. “If you are, please let me know.”

It turns out Severen just landed two pocket listings. Which models are they? You’ll have to contact your Nordhavn salesman to find out!