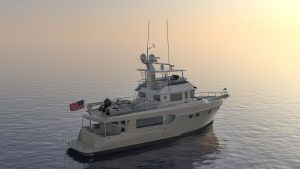 Despite a number of Nordhavn 60 orders on the books, Nordhavn co-owner and Chief of Design Jeff Leishman saw an opportunity to further improvise the model’s proven hull. It has sustained extraordinary success beginning with the Nordhavn 55, and is also used as the basis of the Nordhavn 63. More than 100 of the hull’s three iterations combined have been sold. “It’s been a solid performer for us,” Leishman said. “I believed doing an update would provide us with another outstanding derivative.” The result is a fresh, modern exterior that’s in keeping with the sleeker feel Leishman has been injecting into his latest models. 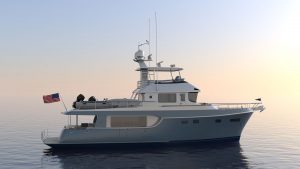 The N625 will maintain the same footprint as the N60, but will also feel entirely different, said Leishman. As a result of his “cleaning up the lines”, the flybridge is slightly bigger, the windows in the cabins will be bigger, and some seating has been added to the foredeck. “It will feel lighter and brighter and give a sense of a bigger boat,” he said, even though size-wise, it’s nearly identical. Like the N60 and N63 before her, the N625 will have three cabins – two below and one behind the wheelhouse.

The N625 also takes a nod from the Turkish built N41 and N51 designs, utilizing a production boat-approach to ordering. She will have more equipment and features as standard which equates to a more resourceful buy. (Not included in the standard boat are tender and soft goods.) The spec won’t be as strict as her smaller sisters’ but certainly the boat won’t be as customizeable as the 60 and 63. Offering yachts with a complete or more-complete spec provides better building efficiency as well, Leishman said.

The boat will be built by Nordhavn’s partner factory, South Coast, at their brand new Taiwanese facility. South Coast, which also builds the N60, ventured into Taiwan in part to combat the Chinese tariff. The N625 will lay up in May, the first boat to be built at the Taiwan location. It is expected to complete by the end of 2021.

N55 Adventure embarking on an aid mission to the Bahamas