Is cruising for teenagers? You better believe it.

Editor’s note: Last week, while on a trip to Puerto Vallarta, Mexico, Nordhavn president Dan Streech took time to visit with a few Nordhavns currently based there. When he called on N50 Noeta and its owners, Alexa and Pat Shanalfelt, he was dumbstruck at the sight of all the high school-aged kids hanging about. Cruising with kids is not exactly a new phenomenon, after all Streech had enjoyed weeks cruising with his own gaggle of grandchildren last year. But they were youngsters – ranging in age between 9 and 14 – whose imaginations, lack of pre-conceived notions and ability to have fun in most scenarios make them more adaptable to this lifestyle. Teens have a reputation for being angsty, obsessed with Reddit, gaming, sleeping til noon, and needing their “space”, so the idea of being far from home, confined to a boat with siblings and parents doesn’t seem like it could ever work. But Alexa, parent to two teens, proved to Dan that cruising + teenagers do mix. 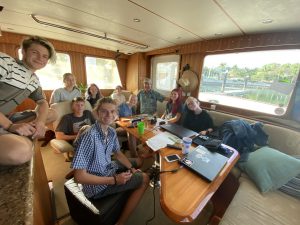 Teenage Live-aboard Cruising Community. Yes, that’s a thing. And Dan Streech got to be a part of one recently on Noeta, N5020. Pat and Alexa Shanafelt have been based in Banderas Bay in Mexico for the past year on Noeta. They cruise with two teenagers and their fat boat cat Gilligan. When Dan visited Noeta in early February, he was greeted by 10 teenagers in Noeta’s salon. Some were playing Mario Cart, some were doing research for an upcoming Dungeons and Dragons game and some were just chatting. The multi-color hair group stopped what they were doing and talked with Dan about what it was like to be a live-aboard teenager cruising the world.

Two of the kids were from Australia, on the last leg of a circumnavigation. Two had just completed a 10-year circumnavigation, about to head to Vanuatu for a second time. Two were Swiss, having lived on multiple boats around the world. Two had recently arrived in the Bay from Washington state. And two, Noeta’s teens, had cruised from Washington to San Francisco on Noeta, 4637, then from Rhode Island to Florida on Noeta, 5020, finally stopping in La Cruz de Huanacaxtle in March 2019. 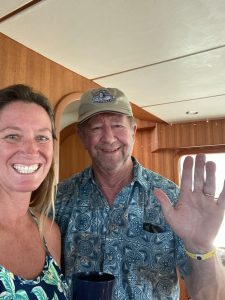 Their families were all drawn to La Cruz. Many came because of the multiple youth activities run by the Marina’s HR coordinator, Catrina Liana. La Cruz is also an ideal starting point for the ‘Puddle Jump’ from Mexico to the French Marquesas. But most come to this small Mexican fishing town for the wonderful music, food and locals.

The teens answered Dan’s multiple questions, as he hadn’t seen anything like this on a Nordhavn before. They told him that they boatschool using the Internet, when available, and books and other resources. They said it was definitely a good education, avoiding many of the pitfalls of ‘regular’ school. Noeta’s 18 year old even shared that she was accepted and will be attending Western Washington University as a Design student. This group of teens is also involved in a monthly book club, meeting every Friday to discuss the month’s book.

Except for Noeta’s teenagers, all of the teens cruise on monohull sailboats and spend most of their time in anchorages. Therefore, Noeta has become the teen hang-out, when docked in La Cruz, with more space (and less rolling) for everyone. To help control the chaos, Noeta mom, Alexa, has purchased everyone their own themed drinking cup that they can use when they come over. Before they leave for the day, they have to wash their own cup or else they have to vacuum Noeta the next day. 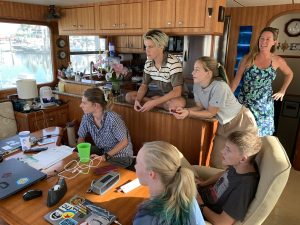 While these kids don’t go to traditional schools, their learning is spectacular. These kids are resilient problem-solvers. They take their turn at the helm. They communicate in multiple languages. They fix things on the boat. They use their dinghies like cars to get to each other’s boats, although most of them don’t have driver’s licenses. They don’t spend much time on social media and are so happy to find other teens, that they are accepting of everyone, befriending kids of all ages and interests. Boat kids are not ‘normal’ kids, they are exceptional kids.

Alexa does admit that they are messy, smell funny, eat everything in sight and fill the head quickly, but she wouldn’t change it for a thing.