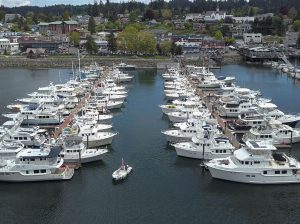 A convoy of five Nordhavns set out from Poulsbo, WA together on a southerly course Sunday afternoon, capping off the biggest Nordhavn event in the history of the brand with the 2021 edition of NAPS, aka Nordhavns Across Puget Sound. What started four years ago as an informal way for Nordhavn owners in the PNW area to meet and hang out has exploded into a weekend that saw owners from 50 Nordhavns getting together to celebrate their much-revered boats.

On Friday, there were 37 Nordhavns docked at the Port of Poulsbo marina; they were joined by the owners of 13 other boats that remained berthed in other parts of the world. In total, about 150 owners, guests and sponsors were in attendance. The event broke records for both the amount of Nordhavns and the number of Nordhavn owners ever gathered.

The camaraderie amongst Nordhavn owners and their high level of engagement online via the several owners chat groups that exist is well documented, but for many of the owners, NAPS was a chance to put a face to a name. “There were many best parts of this event, but I loved seeing so many Nordhavns in one place and the chance to get to meet all the owners,” said Nordhavn 47 owner Jill Bernard, co-organizer of NAPS 2020/21. With the cancellation of last year’s event due to COVID, Bernard, along with NAPS 2020/21 chairman Bill Baker, an N62 owner, spent the better of two years communicating with some of these owners before finally getting to meet in person. “You get the sense you are making lifelong friends here,” Baker said.

In addition to serving as a meet and greet hub, NAPS is a platform for brand new – and perhaps somewhat apprehensive – Nordhavn owners to gain a support system. Owners of N46 Sailish Aire and N64 Lux Invicta were just weeks into their ownership when they pulled into Poulsbo last Friday. “We weren’t sure we were going to come, but I’m so glad we did,” said owner John Eddy, whose N64 is his first boat ever. “Being here just gets me so excited for what’s to come.” He and partner Bonnie hope to get to Alaska this year.

Baker echoes that sentiment, saying he hopes people who currently own or are considering buying a Nordhavn will view NAPS as a means of encouraging their dreams of yachting adventure. “Life begins at the end of your comfort zone,” said Baker. “If you are unsure whether you can do something, just ask an owner!”

It’s easy to say that COVID played a part in the magnitude of this year’s NAPS, but if anything, it led to a decrease in participation. Just prior to the pandemic, organizers were looking at 50 boats that had committed to the 2020 event originally slated for Victoria, BC. Unfortunately, several boats have spent the year sidelined in Canada and weren’t able to cross the border to come to Washington. With restrictions expected to relax by next spring, organizers are hopeful to revisit Victoria as the venue and anticipate more than 50 boats in attendance next year.

Pacific Asian Enterprises/Nordhavn one was one of several key sponsors of this year’s NAPS, but this rendezvous is a completely owner-driven event. “We’ve said it over and over: our owners are our greatest marketing resource,” said PAE president Dan Streech who attended the weekend festivities. “The confidence they have in themselves is a result of the trust and love they have for their boats. You come to something like this and witness it firsthand.

“People who have owned their boats for years, people who have owned only for months, and those who are on their second or third Nordhavn. People who are on boats that were built two decades ago and those whose boats are still being built. People who singlehand and people who employ crew. They are so different yet they all have this commonality that unifies them. They achieve great heights separately but together. It’s astounding, humbling and gratifying.”

For information on participating in NAPS 2022, stay tuned to nordhavn.com and Nordhavn’s social media accounts.

Cruising in the times of the coronavirus