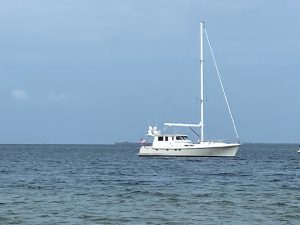 Which Nordhavn is your favorite? It’s a question that’s frequently batted around the ranks of Nordhavn discussion groups, repeatedly asked by prospects and even discussed amongst members of the marine press. And the answers are varied as they are predictable:

“The Nordhavn 40 because it’s the smallest passagemaker.”

“The N46 because it started the whole trawler craze.”

“The 57 because it was the modern Nordhavn of its day.”

“The N59 CP because it can go far and at a quicker speed.”

“The 62 because it is an icon with that huge foredeck.”

“The 75 Yacht Fisher because it is a well-built, proper ocean-going fishing boat.”

“The N80 because its lines are beautiful and contemporary.” 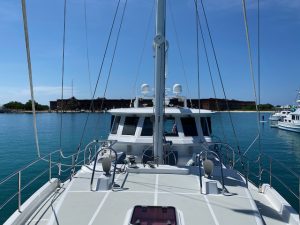 Nordhavn has built and delivered 25 different models and with each one comes a legion of fans ready to argue why their favorite is the best. One design that usually gets lost in that discussion is the Nordhavn Motorsailer. (Full disclosure: even Nordhavn’s marketing department has been known to forget about the MS when discussing brand promotion.) But one Nordhavn Motorsailer’s proud new owner, Ernie Martinez, wants to give equal billing to this often overlooked model. In fact, he recently told Nordhavn Chief of Design Jeff Leishman, “The Motorsailer is your best design!” 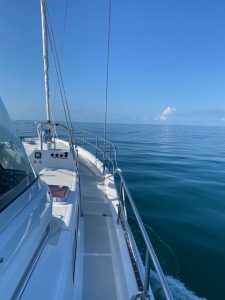 Although only eight total hulls have been built (5603 skipped production), the 56 MS has some serious accomplishments, at the same time earning serious compliments. Among her owners, she has carved out a loyal following: two of the hulls are still owned by their original buyers, while three others were purchased by way of conventional Nordhavn trawlers, whose owners were unafraid to jump to a less traditional Nordhavn. The previous owner of Hull #9, an avid sailor, chose the Motorsailer to help fulfill his dream of single handing across the ocean. He achieved his goal in 2016, going from Newport, R.I. to Belgium, turning on the motor only occasionally. “I was surprised when she reached 8 knots. She really does perform well as a sailboat,” Thierry Verstrade had said at the time. 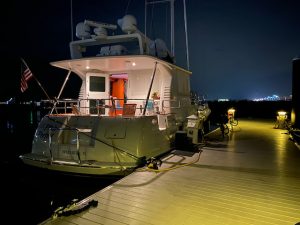 A sailing background is a common thread amongst many Nordhavn buyers, and Martinez has a long sailing history. He owned many cruising sailboats before singing the familiar song of ex-sailors, growing tired of either being stuck in a hole half the time or exposed to the elements. After more than two decades of sailing, Martinez gave in and jumped to his first powerboat, a lumbering Hatteras 53 Motoryacht. It resolved his need to be dry but he couldn’t get past the vessel’s fuel burn.

He remained boat-free for a time, but during the break picked up Voyaging Under Power, edited by Nordhavn VP Jim Leishman. Martinez and wife, Mary, wanted to get back into boating again, and liked the idea of being able to efficiently go long distances while operating from a protected pilothouse. They landed on a brokerage N40 and cruised on it for eight years but Martinez couldn’t shake the sailor out of his soul. They sold the Nordhavn and purchased a beautiful Oyster 53, a luxurious, high performing bluewater cruiser that Martinez couldn’t resist. But after a year, he began to have some remorse. “I switched back to sail with my Oyster, which then reminded me why I went from sail to power in the first place,” recalls Martinez. 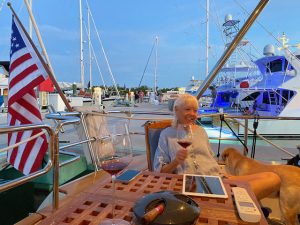 Once and for all, Martinez was ready to commit to a motor yacht for good. He and Mary sold their house with a plan to be liveaboards. They went back to Nordhavn looking for something bigger than their 40, with enough space for two staterooms and two office areas since they were still working. Like many Nordhavn shoppers, the Motorsailer was never on Martinez’s radar. Instead, he was focused on an N62 but during his search, boarded a brokerage MS called Leisure Rules just for the heck of it. Channeling Goldilocks looking for that perfectly comfortable bed, Martinez knew the Motorsailer was the right boat as soon as he stepped aboard. “The first thing that stood out was its size,” he said. “It was big, but not too big. This boat had a sleek low profile and immediately suggested a very stable boat. But it was the interior that really wowed both of us…it’s more like a split-level apartment than a boat. It was just a perfect liveaboard (yacht).” 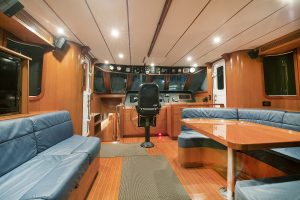 Performance-wise, Martinez wasn’t worried about the stereotypes that plague Motorsailers. “The Hundested Variable Pitch System pretty much negates the old stereotype of a motorsailer” being neither a competent power boat or sailboat, he said. He even went so far as to re-name the boat Pitch Perfect to reflect his confidence in the prop.

Besides that, Martinez had no intentions of actually running the boat under sail alone… 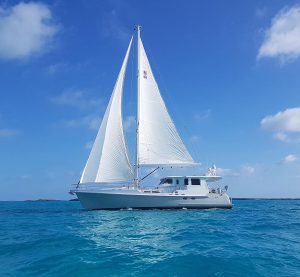 Until, that is, after about three months of ownership when he found himself at sea without a source of propulsion. Due to self-proclaimed operator error, the engine on Pitch Perfect quit. To fix it, the injectors needed to be bled but the hot temps in the ER made the job almost impossible. Martinez made the quick decision to sail her. He ran at 30 degrees off the wind in a 20-25 knot breeze, going 6 knots for well over 14 hours with the autopilot holding the wind angle. “The boat had minimal heel and a very gentle motion in a choppy Gulf of Mexico,” he said. “I would have been proud to have done that in my Oyster.”

While vowing that he’s purchased his last proper sail boat, Martinez isn’t quite sure he’s ready to advocate as a pure power boater. Although he stands behind the trawler philosophy, he’s not keen on the multiplex of systems some trawlers are equipped with, and likes the built-in simplicity of the Motorsailer, adding, “The N56 does not need stabilizers, wing engines or all the systems and maintenance those items bring along.”
In fact, Martinez says the sails on the MS are more reliable and proficient at steadying the ride than any active or passive stabilizing system could. “This boat has a much better motion in a beam sea than any other boat I’ve owned…and the sail will never fail.” 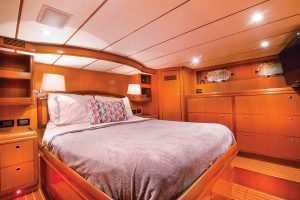 Jeff Leishman, himself, wonders why the Motorsailer never took off like the other Nordhavn models and agrees that it is under appreciated – or possibly, misunderstood – by the boating public. Typically the molds from models that go years without a new order get destroyed. Leishman notes that the MS tooling is still viable and there is even a CCP drive system sitting at the factory. “We could start production on a new one anytime.”

For Martinez, the versatile Motorsailer fills the sailor void in him – perhaps just enough that he no longer misses being at one with only the wind and sea. “I got the best of both worlds with the 56,” Martinez said. “This is a Nordhavn through and through and it also just happens to be able to sail well.”