This Model Is No Longer In Production

There are few boats so uniquely qualified to take two people and their guests around the world as comfortably and as economically as the Nordhavn 40. Strong, rugged and handsome in a no-nonsense way, her special personality was inspired by salty commercial ships fishing the world’s deepest oceans. She stirs a passionate interest and curiosity along docks and throughout anchorages everywhere, with people enthusiastically asking her crew “where have you been” and “where are you headed?” Indeed, the Nordhavn 40 looks like the serious passagemaker that she is. But above all her seriousness of purpose, there is a wonderfully romantic, emotional element to the boat that strongly attracts a wide base of seasoned sailors, experienced power boaters and those just entering the world of boating.

The result of over three years of development by Pacific Asian Enterprises, (PAE), she represents the smallest of Nordhavn’s fleet of ocean-crossing motor vessels. Yet her modest size does not limit her incredible, non-stop cruising range. Thanks to a highly efficient, full displacement hull design and a fuel capacity of over 900 gallons, a heavily loaded boat ready for ocean crossing will cover more than 2,400 nautical miles at 7 knots. For instance, the fully stabilized Nordhavn 40 used during PAE’s Around The World Voyage (ATW) was tested in relatively calm conditions and yielded the following results:

Depending on weather, the actual performance can fluctuate for better or worse. On the run from California to Hawaii, the ATW boat pushed through contrary winds and currents which negatively impacted its output. However, when experiencing favorable seas in the Western Pacific, the boat made 7.4 knots at 2.6 GPH.

Previously published numbers were based on tests of an unstabilized, lightly loaded boat in favorable conditions.

More important than her range is her impressive seakeeping ability. This stout, tough ship is designed to punch through heavy head seas without hesitation and to track down swell as if on rails. Her high bow provides extraordinary buoyancy and contributes to her dry ride. Beneath the surface her forefoot of moderate depth eliminates pounding and helps provide a smooth, gentle motion. Her long keel with a large, protected rudder keeps her going exactly where she’s pointed. When equipped with Nordhavn’s highly dependable TPS (Towed Passive Stabilizers) or gyro-controlled fins, side roll caused by beam seas is minimized, greatly enhancing the comfort of her captain and crew.

Even if her owner’s cruising plans do not include crossing oceans, the Nordhavn 40’s remarkable capabilities will be greatly appreciated and utilized during long-range, coastal cruising. Her solid, seaworthy performance instills confidence in the captain and a sense of safety in the crew. Being caught in an afternoon squall on Lake Michigan or in a nasty Nor’easter while crossing the Gulf Stream, her crew will continue on, knowing their ship can take whatever the sea delivers.

With 45 hulls sold, the Nordhavn 40 established herself as the most capable ship of her size with both a circumnavigation and an Atlantic crossing under her belt. This boat was great to begin with, but the minds at PAE set out to refine her and keep her at the top of her game. The 40II is the same boat technically speaking, but her level of fit and finish resembles the craftsmanship that the rest of the Nordhavn line has become famous for.

Now standard are granite countertops in the head and galley, higher quality teak with enough varnish to fill the grain resulting in a perfect finish, a superior class of exterior stainless including a new stainless rub rail, and a redesigned hull/deck joint that accomplishes a precision fit.

Upon inspection, the most obvious change is the pilothouse and saloon windows which were enlarged and fitted with ½-inch thick tempered glass for more visibility, more light and more durability.

“There is not anything technically different about this boat,” said naval architect and PAE partner Jeff Leishman. “It is still the same N40 built to the same set of scantlings. We have simply refined it. I do feel that it is a better-looking boat as a result of the window changes and the new rub rail.”

There were other small improvements made in the engine room and owners cabin for easier maneuverability.

With all these enhancements, you’d think it was probably impossible to improve on price. But PAE has managed to do that as well. By moving the molds to the South Coast yard in China (builder of the Nordhavn 43, 47 and 55), it afforded the company to lower the base price of the boat. In fact, the first five hulls (beginning with #45) were offered at a significant savings over the 40s that were built in California.

Be sure to call and schedule a showing at any of our locations so you can discover all the newfound greatness for yourself.

All exterior gelcoat is Arocoat, Ferro – or equal

Inside of joint: Two (2) layers mat and woven roving

Dry Exhaust:
Stainless steel for all areas above decks, and mild steel in engine room and in locker

Inspection plates appropriately positioned for interior access by average size man. Each internal baffle with a removable panel to allow access to entire interior of both fuel tanks

Fuel system includes a supply reservoir which is fed by gravity from both fuel tanks. Supply reservoir holds approximately two (2) gallons (7.6 liters) and is fitted with a sight gauge having one (1) gallon (3.8 liter) range and 10th gallon (.4 liters) marks for fuel consumption checks (supply lines are turned off and fuel is consumed from and returned to reservoir). Reservoir fitted with a bottom drain for water purging and with a water sensor – illuminating a light in wheelhouse if excessive water is present. Reservoir fitted with four (4) supply valves for main, generator, wing engine and spare – mounted below sight gauge but above water level range. All returns from main, wing and generator plumbed into reservoir with valves

Sea water hoses: reinforced rubber certified for marine use and provided with double stainless steel clamps below the waterline

Each thru hull has a clearly visible tag indicating its function

Holding tank fitted with a deck pump out fixture

Engine emergency shut off switch and panel with parallel switches

Battery cable:
.00 for general battery leads with .0000 for starting and optional bow thruster

PVC from mast step to pilothouse

PVC from engine room to pilothouse

All thru hulls bonded together with #6 green

Emergency tiller:
Attached to top of rudder post via inspection port and stows in lazarette

Cabinetry/paneling – teak with a satin varnish

Settee on port and starboard side

All horizontal surfaces on deck have diamond pattern non-skid. Standard non-skid to be light grey and contrast to white surrounding gelcoat

Ports: Stainless steel ports in hull with exterior bezels and built with tempered glass – six in hull and two in wheelhouse sides, in galley

Windlass: Maxwell VWC 2200 windlass to be mounted on a molded FRP base

Wheelhouse and salon windows to be .39″ (10 mm) tempered glass

Salon door: three hinge with window and double dogs in addition to deadbolts and locksets

Hatch in wheelhouse roof is one (1) Lewmar #Ocean 60

Deck box on foredeck has hinged lids with gas shock 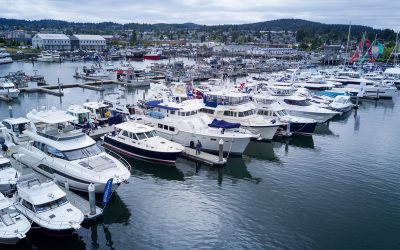 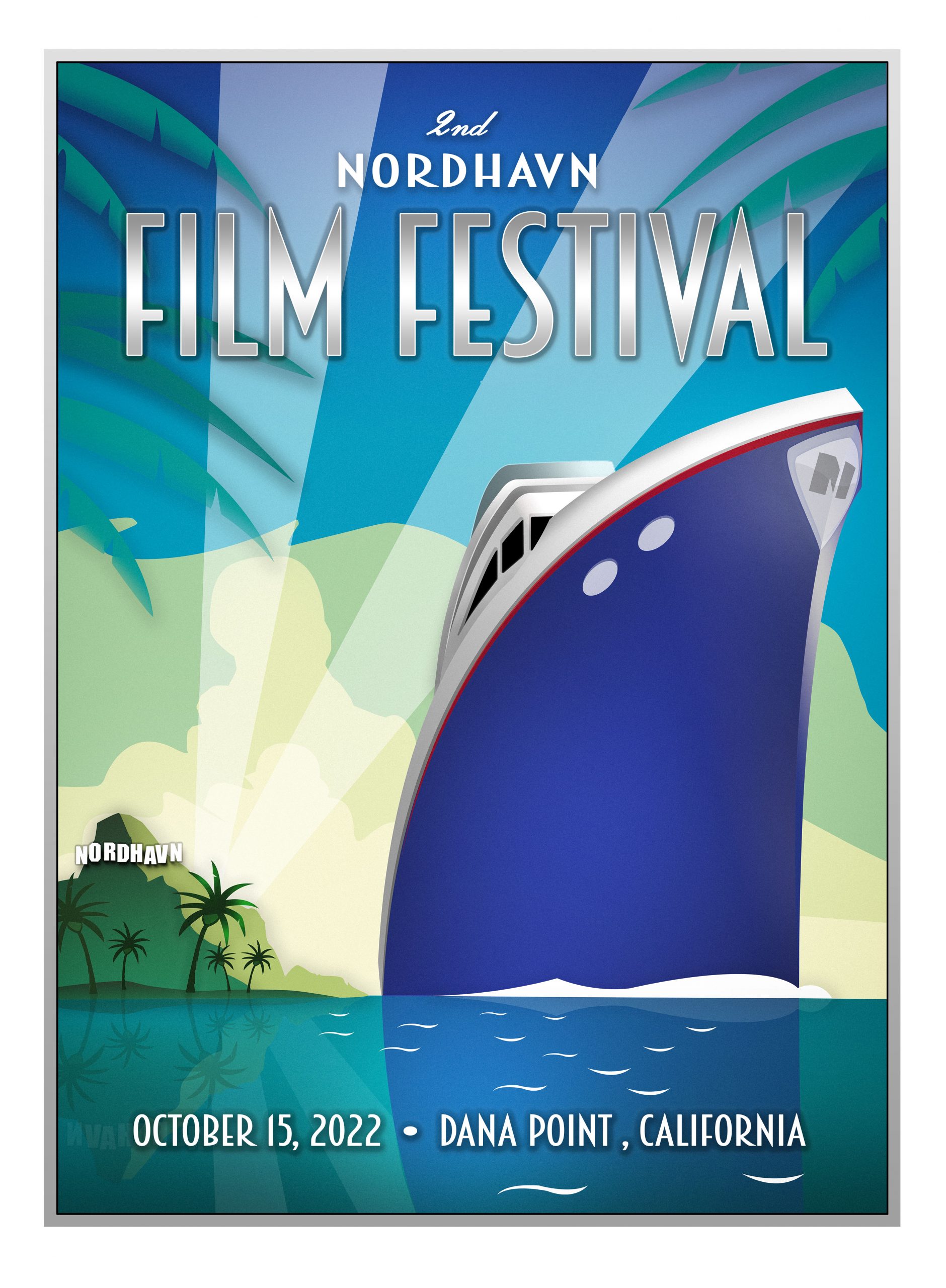 With just three-and-a-half months left until the premiere of the 2nd Nordhavn Film Festival, excitement 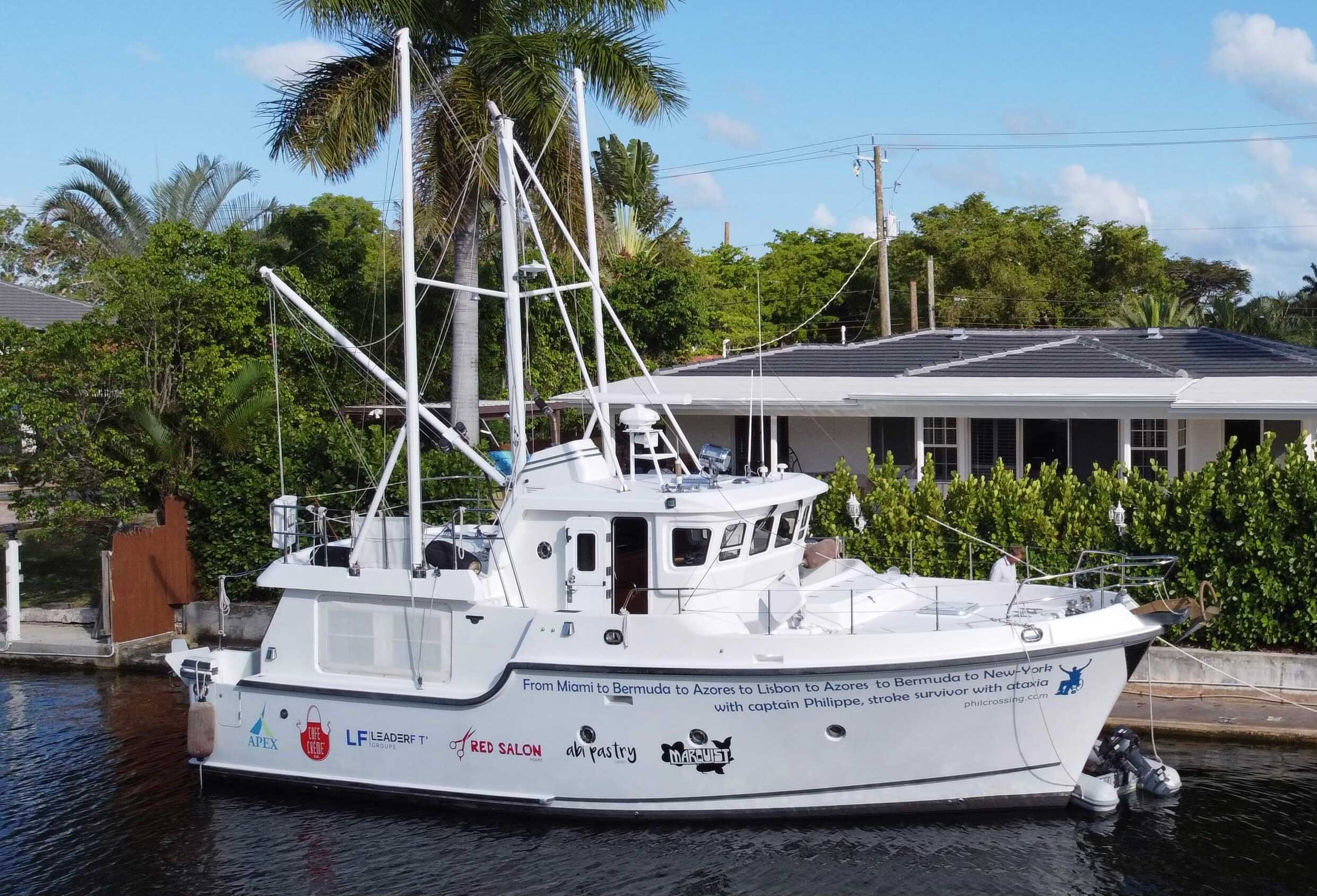 Philippe Guglielmetti departed Miami on May 28, bound for what was intended to be an 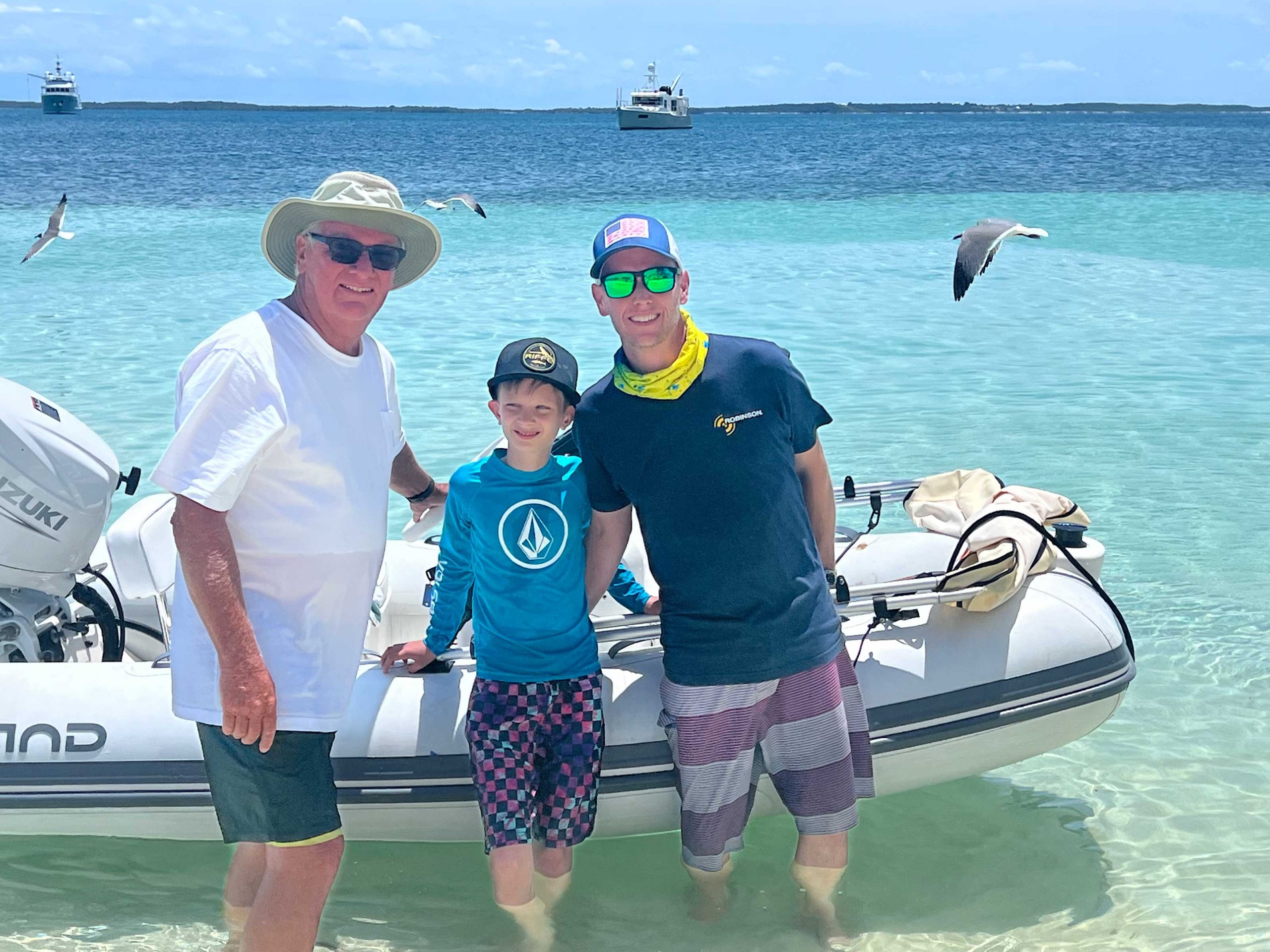 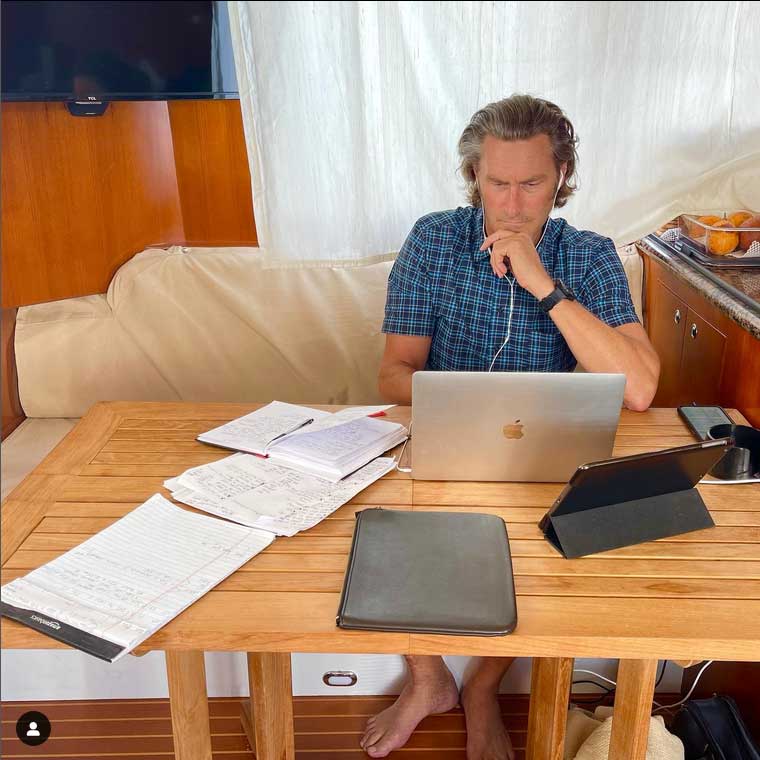 Buying, outfitting and cruising a Nordhavn in the digital age

If there was a way to bottle a boat purchasing, outfitting and cruising experience for 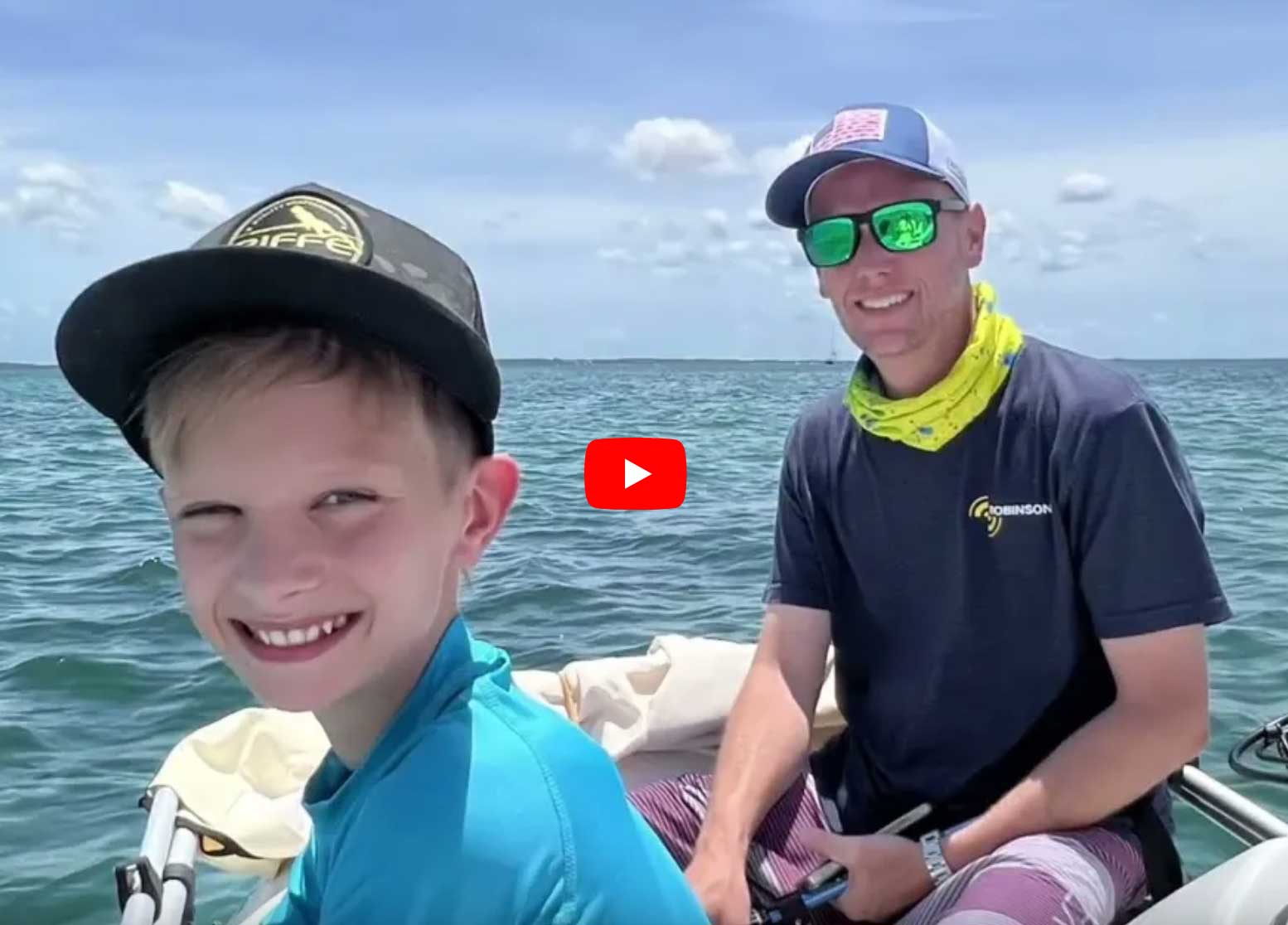 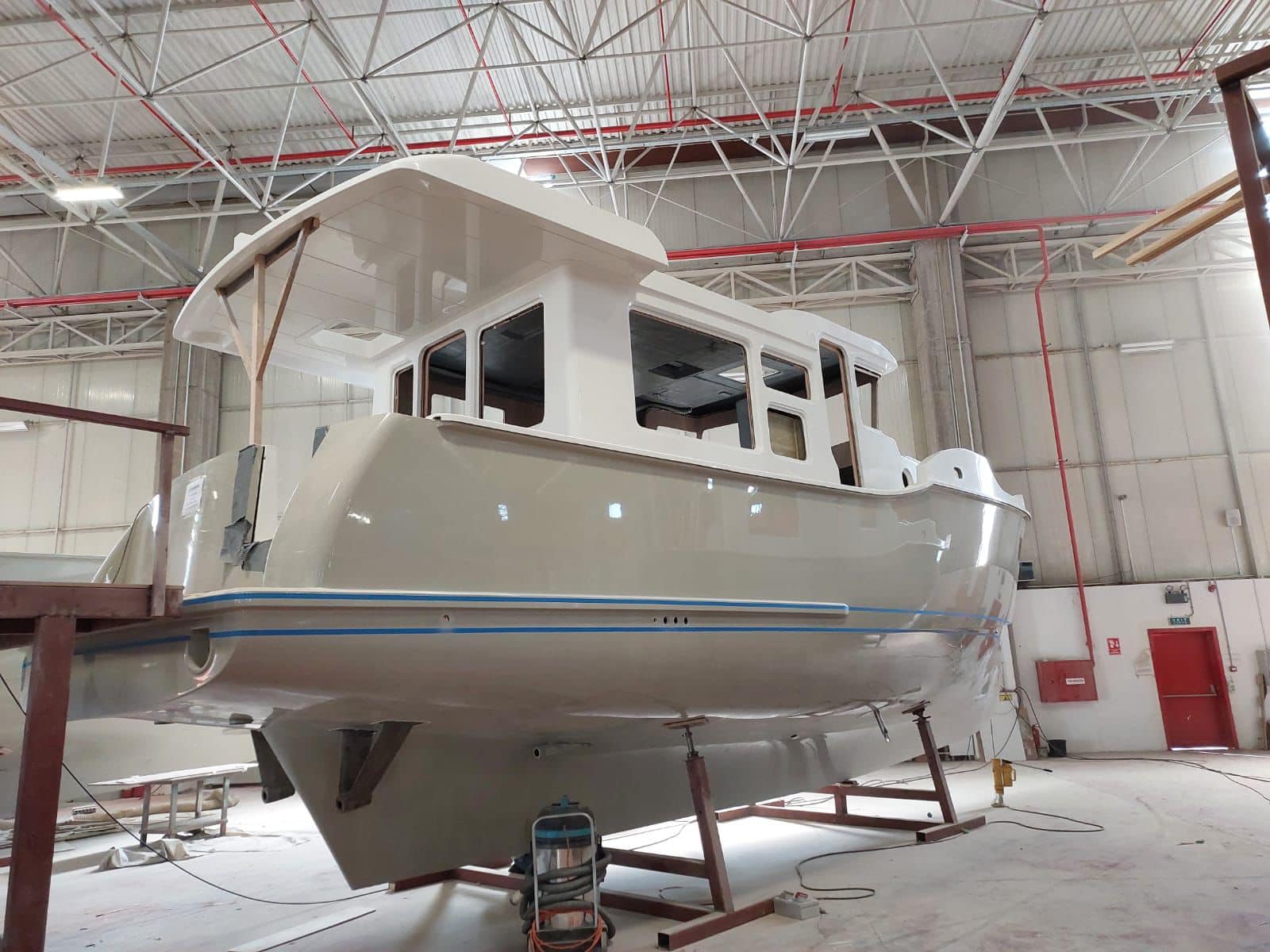 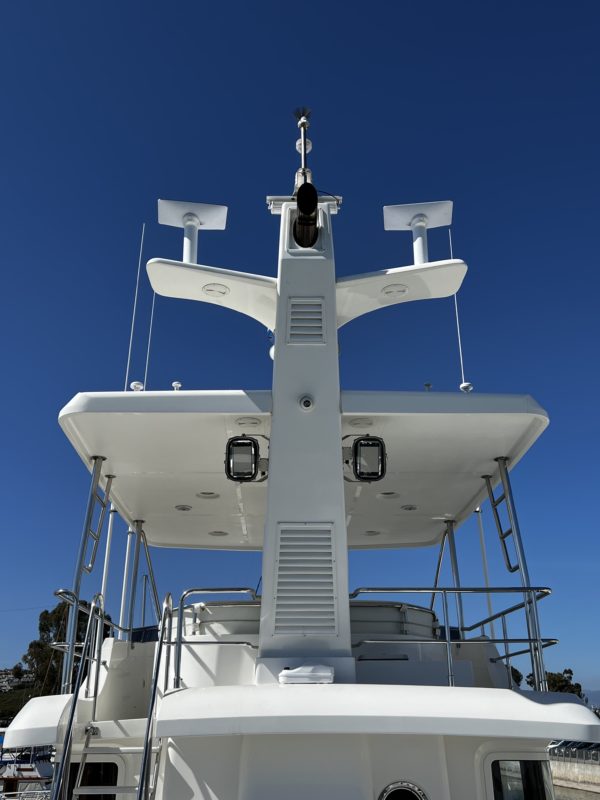 With just three-and-a-half months left until the premiere of the 2nd Nordhavn Film Festival, excitement

Philippe Guglielmetti departed Miami on May 28, bound for what was intended to be an

Buying, outfitting and cruising a Nordhavn in the digital age

If there was a way to bottle a boat purchasing, outfitting and cruising experience for