Most Wanted: The Nordhavn 41’s popularity continues to rise 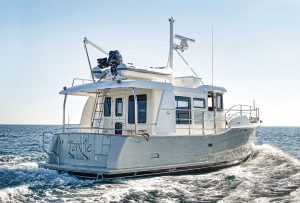 The Nordhavn 41 has been enjoying a rather impressive coming out party since her debut the end of 2020. The smallest passagemaker in Nordhavn’s line-up has received accolades from the marine press, a record number of hull reservations and most recently earned two design award nominations.

Last week, the International Yacht & Aviation Awards announced that Nordhavn 4102 Tavie earned nods for Best Overall Design and Best Interior Design in the Under 25 meter category. Winners are based on a combination of a judging panel’s decision as well as a popular vote, which will happen later this month. (Information on how to vote will be posted to Nordhavn.com and affiliated social channels soon.) The double-nomination is a thrill for Nordhavn’s Chief of Design, Jeff Leishman, N.A., who says the recognition sheds light on the complicated process of constructing a small, CE-certified passagemaking yacht. “It’s important to understand how much design and thought goes into the creation of a vessel such as this,” Leishman said about the Nordhavn 41, which has achieved the most stringent CE rating of Category A for offshore use. “There’s a misconception that with shorter length comes less design consideration. With regard to obtaining the CE Certification, the reverse was true and the original design had to go through several iterations to make sure it would earn the (CE Certification Category A) designation, which was absolutely crucial to the design mission of the boat.” 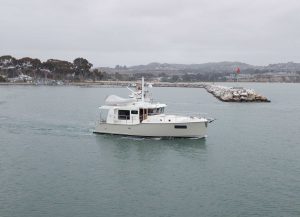 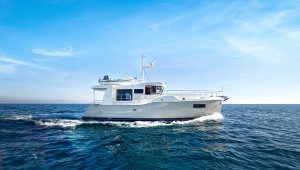 Cruising couples appear to be recognizing the model as a standout and interest in the Nordhavn 41 has reached record levels; as of last week, there were commitments on the first 40 hulls. Nordhavn co-owner and vice-president Jim Leishman has said he anticipated an enthusiastic reception to the boat, but even he marvels at how that has translated into sales.

To keep up with demand, the factory that builds the Nordhavn 41, Telgeren & Partners, moved to a larger building in Istanbul last month. All equipment was re-located and a new tank test was constructed at the new facility, which will be able to handle a more robust production schedule. A time savings will also be banked when it comes to transporting the finished hulls to the shipping port, situated just a few miles away from the new location. “With each hull that is built, the factory is getting more and more efficient with production,” said Project Manager Drew Leishman. Hull #6 is just a few weeks away from completion, he said. Both 4106, purchased by a client from Turkey and 4108 whose buyers are American, will be delivered directly from the factory.

Unsurprisingly, buyers are clamoring to get aboard the N41. (N4102 was certainly one of the most popular boats at the recent NAPS rendezvous.) With only three boats in the U.S., the opportunities are limited. However, plans are for hull #10 to make the rounds of the fall Boat Show circuit this year. Slated to kick off in Newport, RI at the International Boat Show in September, the N41 will also be showcased at the U.S. Powerboat Show in Annapolis followed by the Fort Lauderdale International Boat Show. (Stay tuned to nordhavn.com for boat show announcements.) Last month she was featured on the cover of the May issue of Soundings and is in the current issue of Power & Motoryacht.