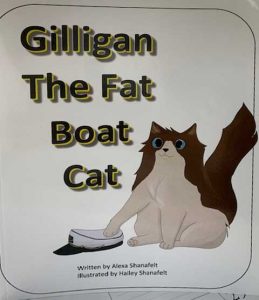 Move over Dr. Seuss, there’s a new cat in town and his name is Gilligan. He doesn’t have tricks up his sleeve, but he does get into plenty of mischief. And, oh yes, he lives on a Nordhavn.

He is the title subject of the new book Gilligan, The Fat Boat Cat written by Alexa Shanafelt, who, along with husband, Pat, owns the Nordhavn 50 Noeta. Shanafelt is the latest owner to throw her hat into the Nordhavn literary ring, but is the first to pen a Nordhavn children’s book based on her journeys – er, make that, her cat’s journeys.

The book follows the adventures of Gilligan as he goes about his life as a feline liveaboard. Adopted by the Shanafelts four years ago, life on a boat is the only life Gilligan has known. He was first introduced to boating as a kitten on the family’s Nordhavn 46 (also called Noeta) and continued his position as Furry First Mate after they moved on to Noeta in 2019. When it came to finding inspiration for a story line for Gilligan, Shanafelt recalls with a laugh, “We had a lot to work with!” 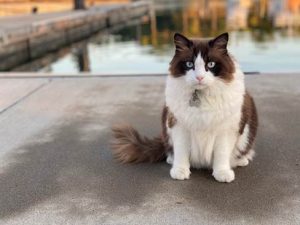 Before her life transitioned to full-time liveaboard, Shanafelt was a school teacher in Washington and Idaho so she had lots of experience working with kids. And thanks to her own brood of three she was immersed in the world of children’s literature. Despite this, she hadn’t ever considered writing a book, and in fact, the idea really was conceived as a senior project for daughter Hailey’s final year of schooling. Shanafelt has homeschooled her two younger kids, Hailey, 19, and 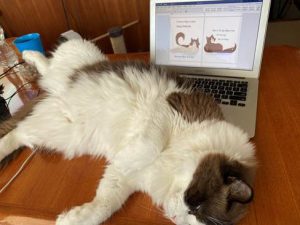 Jack, 17, since they became full-time liveaboards four years ago (eldest daughter Mikayla, 25, had already graduated public school). When researching a project that would highlight Hailey’s talent for illustrating, she came up with the idea of creating a children’s book. Together, Shanafelt and Hailey brainstormed the concept of centering the story around Gilligan’s adventures as a boat cat, knowing fully well there was loads of material from which to pick. Poring through their vast database of Gilligan photos, taken in his various states of disarray, they started to flesh out a story line. The tales behind pictures taken of him sleeping in the sink, soaking wet from an unintentional jump overboard, and hiding in cupboards and drawers, along with the things he tends to do on a daily basis, combine to make up the narrative of Gilligan, The Fat Boat Cat. 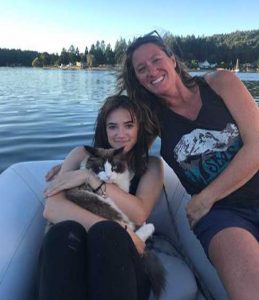 Hailey is now a freshman at Washington University in Bellingham, but while on the boat would spend her down time sketching, and also created commissioned art pieces for customers who lived in the towns surrounding their marina in Mexico. She took on the challenge of illustrating the book with earnest, drawing and re-drawing to make sure the images perfectly captured the tone and message of the words on the page. For her part as author and publisher, Shanafelt called on her cousin, a book editor, for guidance, and learned about layout, design, color and word choice. “It took a year of drawing, writing, revising and editing, but we pulled it off before [Hailey] went to college!” said Shanafelt. Hailey plans to apply for the Design program at her school as she hones in on a Bachelor of Fine Arts degree and hopes the book will play a role in helping to achieve that goal.

Over the duration of their collaboration, the book evolved into something more than just a school project. Since Noeta has spent so much time in Mexico, Shanafelt decided to offer the book as a learning tool for local kids. She created a bi-lingual book for Spanish speakers learning English and vice-versa. A former Spanish teacher in the U.S., it felt almost instinctive to also offer the book in Spanish, she said. Despite her background, Shanafelt enlisted the help of a book editor in Mexico to ensure the translation sounded native. 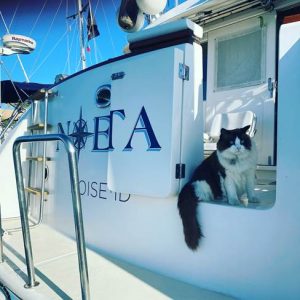 In La Paz and Ensenada, the book has become popular with American cruisers who want their children to know Spanish. Meanwhile, Shanafelt teaches English to a group of Mexican students and uses the book in her classroom. “They love it when I show them real pictures and videos of Gilligan,” she said. “It makes the language real for them.”

Since Gilligan hit the market last August, it’s sold around 200 copies all over the world including in England, Canada and Spain. It’s been well-received, too, earning 5 stars on Amazon and goodreads.com and a glowing review by a blogger in Spain. Shanafelt says she’d like to embark on a mini book-tour with Gilligan in her old school district to give readings to the students there. “It’s exciting,” says Shanafelt, but to date hasn’t focused on marketing the book. “We were in this for the experience.”

If sales continue to rise, would Hailey and her mom team on a second Gilligan title? “[Hailey] is proud of her work, but she is a little tired of drawing – and re-drawing – cats,” says Shanafelt. “I don’t think I can get a sequel out of her!”

To purchase your copy of Gilligan, The Fat Boat Cat visit http://www.mvnoeta.com/2020/08/gilligan-fat-boat-cat-gets-published.html. Find him on Instagram #gilliganthefatboatcat and on YouTube at https://youtu.be/SSOsKBqhnn4

Nine Nordhavns converge in the Sea of Cortez