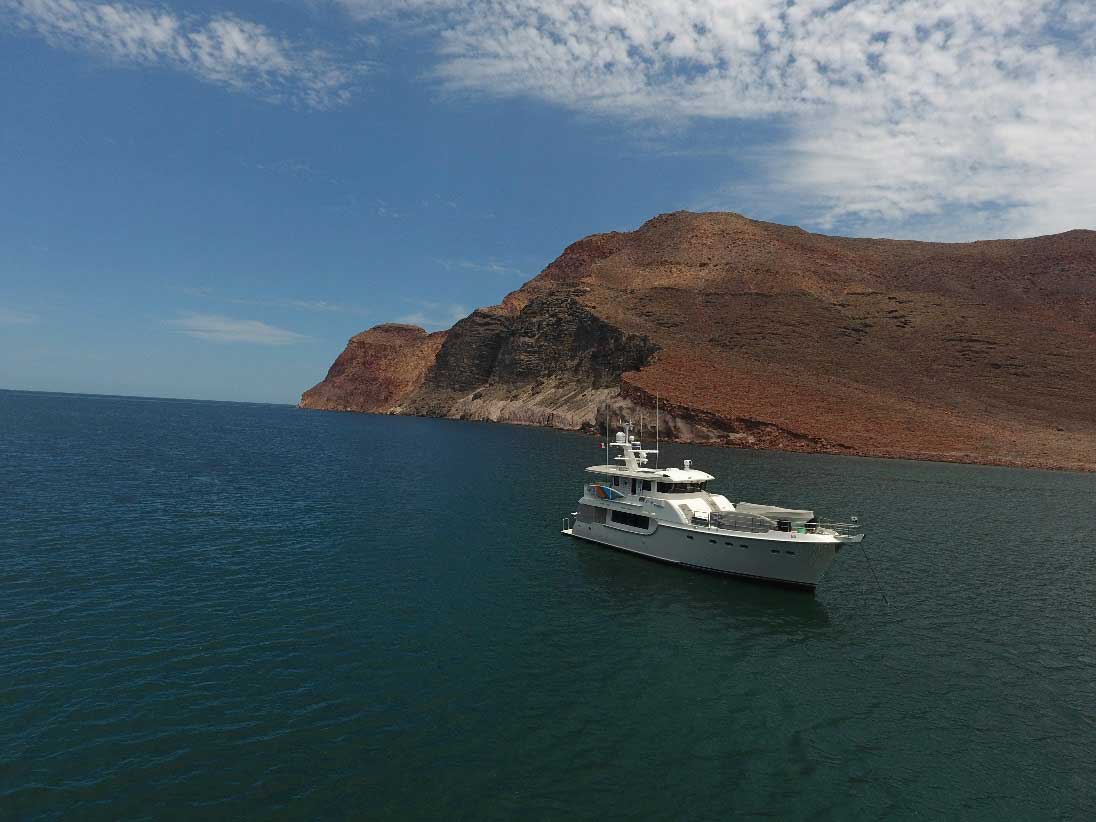 More than a decade ago, there was a couple who were dauntless sailors. The type of nose-to-the-ocean seafarers, eager to pass down to their youngsters the tradition of relying on the trade winds. Their passion was to go off the beaten path, to see and experience far off places and by the time their son turned three-years-old, he had more ocean crossings under his belt than years of his life. The family progressed through a production sailboat, custom catamaran and finally, a bluewater sailing ketch. They completed eight transoceanic passages, went to the northernmost reaches of Quebec near Baffin Island and as far south as Auckland, NZ. And then they were hit with what often plagues lifelong sailors: reality. The reality that sailing is only enjoyable when conditions are right or when time or destination doesn’t matter. More and more, sailing morphed into cruising under modest power, while boat maintenance meant taking care of the sails, mast, rigging plus the engine, generator and diesel tanks. The couple grew increasingly frustrated at having to constantly manage two means propulsion. It marked a breaking point. 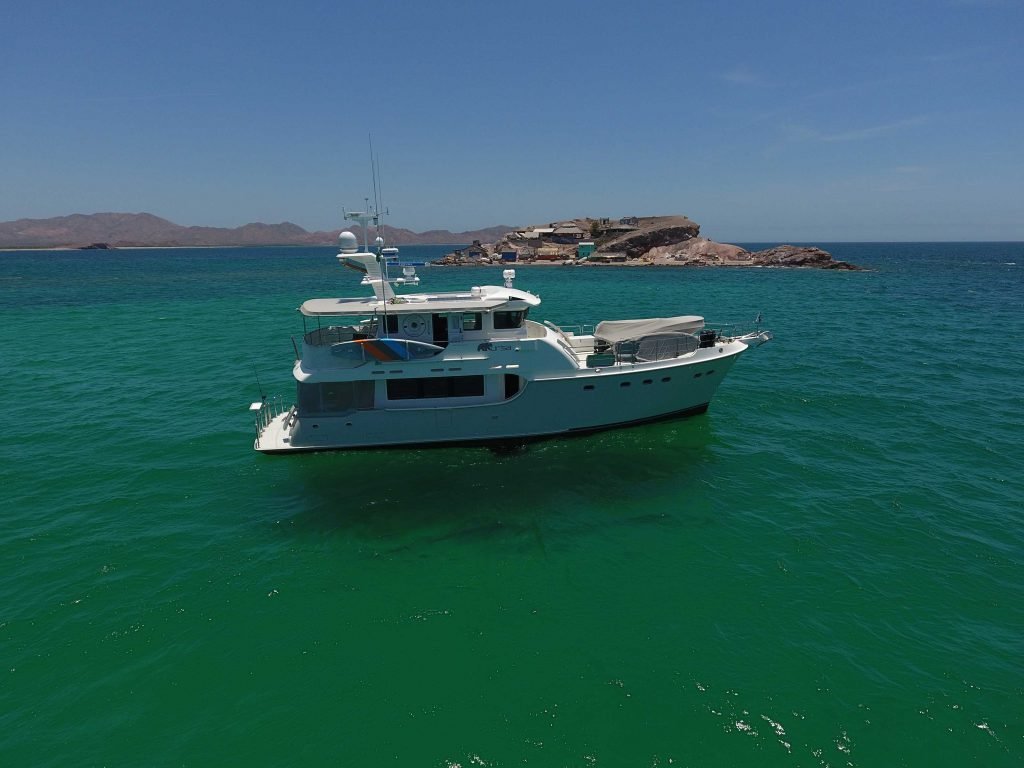 With three growing children, they needed to upgrade their boat – not only to something bigger, but something, they decided, that would allow them the freedom to roam the world and not be so weather dependent. So they focused their search on trawler yachts. For these serious mariners, the decision to go with a Nordhavn was practically made before the search had even begun.

Having seen Nordhavns during their travels on both the northern and southern hemispheres, it was evident these vessels had the range to make any destination within reach. But it was the brand’s reputation for build quality that sealed the deal. “We know that Nordhavn uses only tried and true systems, and is a very solid boat built by people who know them inside and out,” said the owners. “It was a deciding factor. When crossing oceans with the family, it’s important to have full trust in the systems and the boat.”

After zeroing in on Nordhavn, they landed on the N63, one, for its size, and two, for its enclosed pilothouse.

“The N63 is a true ocean passagemaker, with diesel capacity, weight, and length to cross the Pacific,” they said. The model’s interior roominess not only provided ample space for a family of five, it would be easily managed without captain or crew. They also liked that the LOA of the boat at 62’ 6” is just about at the top end of the size range where docking and maintenance expenses are palatable.

The other feature of the N63 that stood out is its integral pilothouse. If there was anything sailing taught the couple, it was the value of enclosed spaces, so the N63’s pilothouse design was a huge draw. “Whether it’s too sunny, too windy, or too cold, our goal was always to be comfortable – and as a consequence, less tired – on passages.” 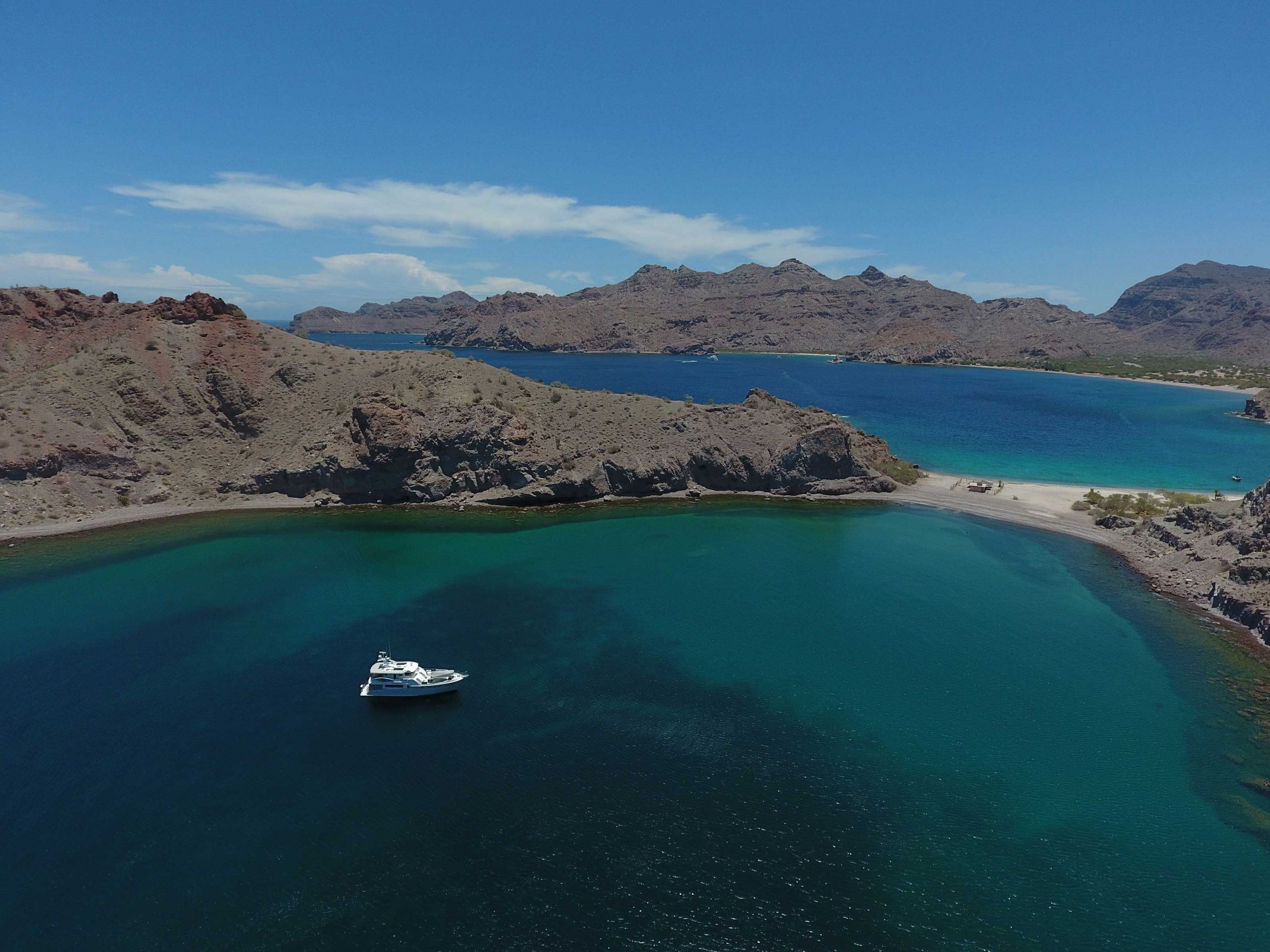 The family purchased a production spot, 63#18, and when it came time to outfit the boat, they drew on all their past experiences sailing the world to ensure they mimicked the best parts and addressed the worst. They also took into account their planned destinations: Mexico to start, then Alaska and eventually Patagonia, which meant proper cooling and heating were a must. Safety and capability aside, above all else, the family wanted independence and comfort while cruising, which ultimately drove the equipment decision-making.

Nowhere is this reflected more than in the pilothouse, which was installed with two “of the most comfortable” Stidd helm chairs, sumptuous L-shaped settee and table, UV insulation on the windows, mini-fridge, and spacious, sunny off-watch (captain’s) cabin with head and separate shower. (A person could just about never leave this wheelhouse and be perfectly happy.) There’s also an expansive dashboard which features a cache of the most state-of-the art electronics with built-in back-ups.

The best (and sometimes trickiest) part about being adventurers is going places no one else visits – or even lives – hence the aforementioned need to prioritize “independence.” For these owners and their family, this meant equipping the boat accordingly with lots of redundancies. Passive stabilizers and TRAC-STAR stabilizer system when at rest; a monitoring system with sensors and cameras throughout as well as external cameras for docking and security; cold climate creature comforts such as diesel heater, steam shower, heated floors, and heated lower cockpit; lithium batteries; a generator with back-up; automatic power management plus a dock charging converter for plugging in anywhere in the world; refrigerators with 50% upgraded capacity and excellent food preservation; top of the line moisture-proof mattresses; increased storage throughout the boat; two fully-independent nav systems; a powerful search light with forward looking sonar and thermal camera. While extensive, the owners would argue all upgrades were necessary to ensure the family felt secure and comfortable wherever they traveled. Combined with Nordhavn’s fail-safe and well-thought out design of basic boat systems, the boat they named URSA was perfectly suited to take them on the adventures they dreamed of. “We wanted to feel at home on the N63, and to continue sailing further and longer than we’d done before,” the owners said. “We weren’t proven wrong. The N63 handles like a dream whether bashing into 12-foot waves or surfing down them, whether maneuvering in a tight marina or motoring towards the sun with dolphins all around us and a just-caught fish on the cockpit grill.”

Alas, the pandemic hit soon after they took delivery of their Nordhavn and they were forced to hunker down in Mexico for a year. Not the worst thing in the world, but certainly not the trans-oceanic plans they had mapped out when purchasing URSA. “The pandemic would not have kept us from traveling,” they said, but it was followed by a medical diagnosis of one of their children, which required access to consistent and reliable care.

The family has had to shift gears with their travel plans and are putting cruising on hold for a few years. They recently made the tough decision to sell their beloved boat. “URSA is not a dock queen,” they said. “She was meant to go places, to let somebody explore the world, and it’s a shame we can’t use it.”

While they wait for the all clear to head back to sea, they are keeping their dreams stoked in the form of a commitment on a new Nordhavn 71, reserving a future production spot that will align with their timing. “We wanted to upgrade to a bigger Nordhavn that will be ready by the time we’re ready to rejoin the cruising life.”

To learn more about the spectacular Nordhavn 63 URSA, visit https://nordhavn.com/brokerage/listings/n63-ursa/.