Pacific Asian Enterprises, Inc. (PAE) is excited to announce the addition of two new models to the Nordhavn line-up of passagemaking yachts. The Nordhavn 625 will be a twist on the current Nordhavn 60 hull; and the Nordhavn 71, a modern option for those in the 65-75-foot range.

Despite a number of Nordhavn 60 orders on the books, Nordhavn co-owner and Chief of Design Jeff Leishman saw an opportunity to further improvise the model’s proven hull. It has sustained extraordinary success beginning with the Nordhavn 55, and is also used as the basis of the Nordhavn 63. More than 100 of the hull’s three iterations combined have been sold. “It’s been a solid performer for us,” Leishman said. “I believed doing an update would provide us with another outstanding derivative.” The result is a fresh, modern exterior that’s in keeping with the sleeker feel Leishman has been injecting into his latest models. 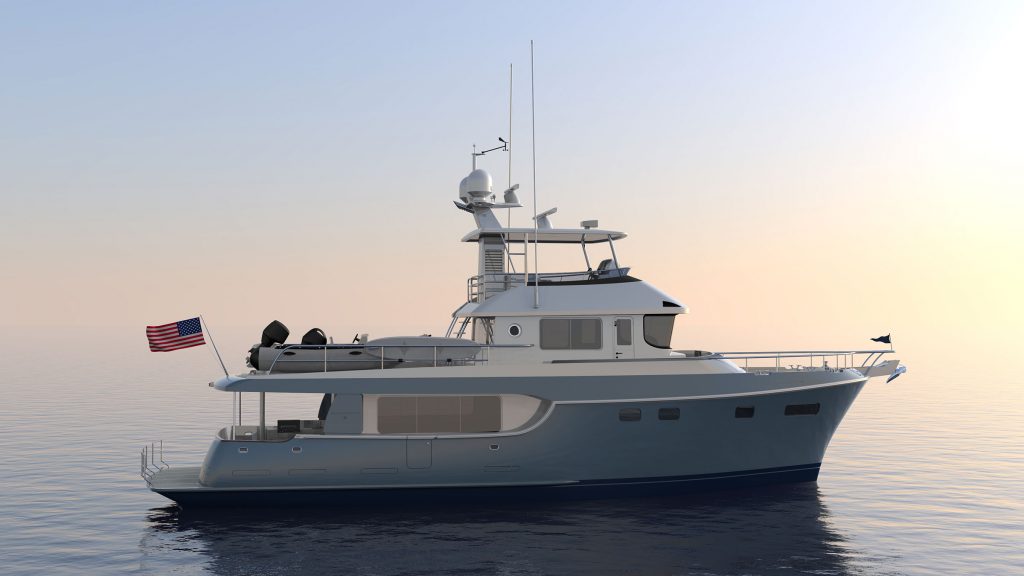 The Nordhavn 625 will maintain the same footprint as the N60, but will also feel entirely different, said Leishman. As a result of his “cleaning up the lines”, the flybridge is slightly bigger, the windows in the cabins will be bigger, and some seating has been added to the foredeck. “It will feel lighter and brighter and give a sense of a bigger boat,” he said, even though size-wise, it’s nearly identical. Like the N60 and N63 before her, the N625 will have three cabins – two below and one behind the wheelhouse.

The N625 also takes a nod from the Turkish built N41 and N51 designs, utilizing a production boat-approach to ordering. She will have more equipment and features as standard which equates to a more resourceful buy. (Not included in the standard boat are tender and soft goods.) The spec won’t be as strict as her smaller sisters’ but certainly the boat won’t be as customizeable as the 60 and 63. Offering yachts with a complete or more-complete spec provides better building efficiency as well, Leishman said.

The boat will be built by Nordhavn’s partner factory, South Coast, at their brand new Taiwanese facility. South Coast, which also builds the N60, ventured into Taiwan in part to combat the Chinese tariff. The N625 will lay up in May, the first boat to be built at the Taiwan location. It is expected to complete by the end of 2021. 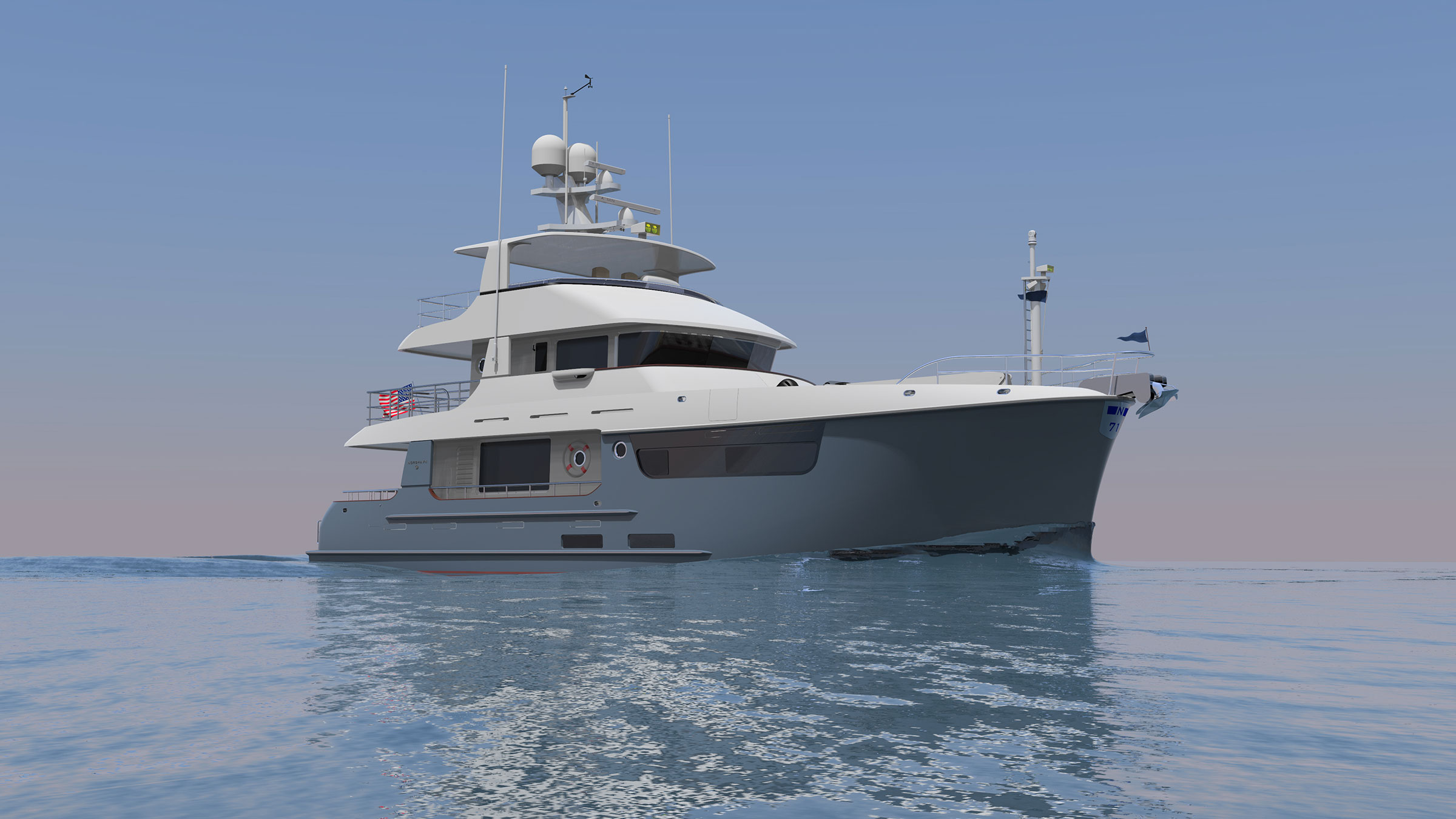 The Nordhavn 71 is a brand new boat that will follow in the wake of the Nordhavn 80, providing her owners an elegant, modern, state-of-the-art passagemaking yacht. The N71 is a brand new hull, created especially for those who find themselves in the upper end of the mid-size range, who desire the esthetic of one of Nordhavn’s larger yachts, but want the ability to manage without crew.

Indeed, with the first three hulls committed by former owners of Nordhavn 68 or Nordhavn 60 models, the N71 seems to be filling a void. Nordhavn co-owner and Chief of Design Jeff Leishman said the N71 is a modern response to the third generation Nordhavns that were built in the early 2000s. Styling, technology and creature comforts have all evolved since then. “It was time to provide that size category in our product line with a new alternative,” he said.

The Nordhavn 71 is available in two layouts: a three-stateroom layout with skylounge, or a layout that incorporates a fourth stateroom in place of the skylounge. While decidedly smaller than the 80, the N71 mimics her twin model configuration, sleek lines and advanced level of engineering. She was designed with Nordhavn’s in-house Computational Fluid Dynamics program. As is the case with all long-range Nordhavns, she will have ocean-crossing capability and will be built to the strictest CE Certification standard for offshore use.

Like every new Nordhavn design, real world experience and customer feedback went into the creation of this new model. “We took everything we knew from the Nordhavn 68 and 76 models and applied the parts that were most successful into creating the N71,” said Project Manager Justin Zumwalt. Zumwalt has spent the past 16 years overseeing the N64/68 and N72/76 projects, and was a natural choice to manage the 71.

Aesthetics aside, the N71 benefits from more intuitive space planning, a stepped-up lighting schedule, a big dining room, spacious owners cabin and larger windows. She will also keep in step with newer Nordhavns being offered with a more complete spec, thus keeping costs and build time wrangled. This won’t be a cookie-cutter boat by any means, however. The specification includes a credit for furniture so buyers can choose their own chairs, dining table, pillows and the like, resulting in a highly-individualized yacht.

She’ll be constructed by the craftsmen at our Ta Shing yard in Taiwan, where the 68 and 76 are built. Tooling is currently being fabricated and the first hull is expected to begin construction in January of 2022. The lead time of hull #1 will be 18 months but Leishman anticipates production will streamline down to 15 months with subsequent models. Cost of the N71 is about $5 million.

Back on the market: N43 Corisande

The sale of N76 ULYSSES

Nine Nordhavns converge in the Sea of Cortez