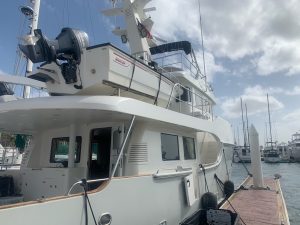 Rick and Wendy Laws are ready for this. Today, they embark on a 3,400 nm journey that will take them from one side of North America to the other, aboard a boat that’s not exactly known for its simplicity. Despite having only ever roamed the waters near their Maryland home in smallish runabouts, they have worked hard to possess the confidence of seasoned captains, and now are set to embark on a course that will take them across the entire southern coast of Mexico to Central America and through the Panama Canal.

Not bad for a couple of novice boaters. And, truth be told, they were ready for this seven months ago.

They purchased their Nordhavn 60 Door Prize last year in Anacortes, WA, brimming with excitement about the new life adventure that awaited them, while equally green in the systems and procedures needed to bring said “new life adventure” to fruition. The thought of taking their newly purchased yacht from Puget Sound to its new home port in the Chesapeake seemed was a daunting one.

“A lot of owners are nervous when they purchase their first Nordhavn. It’s an intimidating yacht,” said their salesman, Devin Zwick, from Nordhavn Yachts Northwest’s Anacortes branch. But for Zwick, his job as a sales representative is not complete until his customers have a certain level of comfortability with their boat. “I cannot express how important it is to make sure my clients are set up for independent success in the future.”

Contrary to the way some transactions are handled, at Nordhavn the sale does not end with the handing over of the keys. The closing of the deal is really just the middle part of the sales process, which begins with the search. The final step isn’t complete until the last box on a client’s training checklist is ticked. “I haven’t really done my job if the client isn’t comfortable running their own boat,” said Zwick.

This is accomplished through hours of training. Many, many hours of training, which Zwick approaches in a tag-team effort with Nordhavn service partner Harmon Marine. When it came to Rick and Wendy, owner Greg Harmon took over electronics education while Zwick was in charge of systems, operations, and making sure they were capable at the helm.

After about eight days of consistent work aboard that included driving and docking practice, and many go-rounds on what to do pre-departure and underway, Zwick felt the Laws were ready for their shakedown. Conveniently, it would serve as the first leg of their delivery trip to Maryland. Under Zwick’s watchful eye, the Laws would put what they learned to the test on a straight shot from Anacortes to Dana Point. The plan was golden: it was a long enough passage for the new owners to gain confidence running overnight and offshore, plus anything that might need attention could be looked at by Pacific Asian Enterprises’ southwest commissioning team upon arrival.

The trip was a success, the boat performed beautifully and so did Rick and Wendy. Zwick flew back to Anacortes and the Laws stayed put in Dana Point for a little bit, readying themselves for a solo mission down to Mexico. This next crucial step in the progression of their cruising prowess became all the more important after they were tapped to deliver a new prop shaft down to a Nordhavn 55 stranded in La Paz. PAE had received the part from the manufacturer and since Door Prize was already headed in that direction, the Laws volunteered to transport it. With just Wendy’s sister aboard as crew, the couple navigated their way down like the pros they had become and successfully delivered the part to the grateful and relieved fellow owners.

Just as they were riding a wave of confidence, Coronavirus hit. The Laws were forced to leave the boat in La Paz and return back home to oversee their business and stay hunkered down. Not only did it blow up their plans, it put a potential chink in their cruising dexterity.

Fast forward to today. It’s been seven months since they’ve turned the key on Door Prize. With a certain cluster of cobwebs that needed to be shaken off, the Laws enlisted Zwick to once again guide them on their journey. Zwick was happy to oblige, but this would be a two-pronged training mission. While the Laws are getting a refresher, another crewmember will also get some miles under his belt. Always looking for ways to expand support opportunities for clients, Zwick has taken a young captain under his wing to help with training and deliveries. “I really want to do everything and be everywhere for my clients, but I’m so busy, that’s just not feasible,” explained Zwick. His protégé, Kevin Pratt, will step in and do the jobs Zwick can’t do.

This past week the crew has dedicated to provisioning the boat with lots of food, lots of supplies, and lots of fishing gear. This is a delivery mission, but after the stress of the pandemic, everyone is looking forward to having some fun at sea. “It won’t be all work!” laughs Zwick, hoping they land lots of tuna for ceviche and sushi. The plan is to head straight to Marina Flamenco in Panama City before transiting the canal, sometime around November 8. This will be Zwick’s eighth transit.

Once through, Zwick will depart the boat and the Laws and Pratt will bring the boat to Key West where it will winter. Eventually in the spring the boat will head home to Maryland.

“I’m excited to be back on board, ready to make their dreams come true,” says Zwick. “And I’m eager for Kevin’s success with them so we can do this again for someone new.”