“Sail on your own schedule!” reads one of the rallying cries on the website of the Panama Posse, a giant, multi-routed rally that allows boaters to pick their own timeline and departure and arrival points. Looking to get from Mexico to Panama? Or Panama to Mexico? Florida to California and vice-versa or maybe the Caribbean to points north? Virtually, if any route you desire takes you through the Panama Canal, you are ripe for the Panama Posse. With loads of up-to-date information, major berthing and excursion discounts, and opportunity for meeting new cruising buddies, it’s no surprise that in just four years, the number of participating boats has grown to nearly triple what it was at the inaugural sailing. Even less of a surprise is that for a Rally comprised mainly of sailboats, Nordhavn outnumbers all manufacturers – except Beneteau – with 9 yachts signed up to participate.

A Nordhavn tour de force is something that makes the energy-to-spare founder and organizer of the event, Dietmar Petutschnig, very happy indeed. Petutschnig, who has witnessed the Panama Posse grow from 87 boats in its first year, sees infinite possibilities for the Rally, the strength of which relies on participant word-of-mouth. “Nordhavn owners are more comfortable with long range cruising than any other brand, and they like to talk amongst themselves,” said Petutschnig, who guesses the more Nordhavn owners find out about it, the more they will use it as a gateway to their own ambitious itineraries that extend beyond the Posse’s multiple-routes. While primarily a sailor’s rally, the Panama Posse is open to anyone whose boat has a cruising range of at least 500 nm. Petutschnig expects one day to see the ratio of powerboaters grow to beyond one-third of all participating vessels.

Besides the laid-back, schedule-free nature of the Rally, what draws most boaters to participate is the Panama Posse’s treasure trove of updated cruising information. Each week at designated times, participants from each of the six different routes or “pods” discuss on a secured chatroom any pertinent information they learned on their route from that week such as verified anchorages and fuel sources; they also address the weather for the days ahead. “The information is constantly being refreshed so no matter where you are in the route, you are receiving the absolute most current information,” said Petutschnig. This is extremely beneficial to boaters since guide books for these areas are often lacking in detail.

Like any seasoned seafarer, Petutschnig preaches the cruise-at your-own-pace frame of mind. (“Schedules kill sailors!”) But if participants happen to be around for kickoff festivities, the Panama Posse is offering seminars to be attended in person or watched online prior to one’s own departure date. Rally launch week begins December 4 in Barra de Navidad featuring – in addition to seminars – a few parties to celebrate the “official unofficial” start. Otherwise, there are no hard-and-fast dates. The Panama Posse offers general guidelines – mainly weather-influenced – for when boaters might want to time their arrivals depending on destination: those arriving in Panama should do so with plans to move on from the area by May while the “counterposse” should consider vacating Mexico by June or otherwise find a hurricane-safe marina or haul out.

Going agenda-free is a very attractive feature of the rally, and one Nordhavn owners named as being crucial to their participation. “This is key to the cruising lifestyle,” said Nordhavn 50 owner Alexa Shanafelt. “Our boat name No ETA (or Noeta) fits nicely with that concept.” Shanafelt and her family signed on to participate this year after a positive experience last year. While they’d like to travel to Panama someday, now isn’t the right time due to their current commitments. “We need to be near an airport since (my husband) Pat still works in the States. There just aren’t enough airports along the way to Panama,” she said.

“We are one of the many that sign up for the information, camaraderie and discounts.”

The Shanafelts are content to stay in Mexico and will be joined by fellow Nordhavn pals on N55 Red Rover and N64 Gitana who also plan to only go as far south as the Sea of Cortez. While the Shanafelts had already resigned themselves to wintering on the Mexican west coast, their cohorts on Red Rover and Gitana both sidelined plans to go to Panama this year due to COVID-19 and fears that restrictions would hamper their efforts to see and explore the different ports to the fullest extent. They do plan to join again and go all the way to Panama; Kevin and Allison Jeffries are aiming next year to use it as a springboard to future world cruising on Red Rover. Once through the canal, they hope to visit the San Blas Islands, Colombia, explore north through the Caribbean, up the US eastern seaboard and into the Canadian Maritimes, and eventually across the Atlantic to Europe.

Gitana’s owners, Hugo and Michele Cookson, are less sure about 2021, thinking that they may feel more comfortable returning back up to the Pacific Northwest and spend next summer in Alaska. World traveling is definitely on the docket, however, says Hugo. The Cooksons previously spent two seasons cruising the Med on their Nordhavn 47 and loved it. “But that’s the question,” says Hugo. “Do we hang in Central America-Caribbean-Bahamas for a period of time or go back to the Mediterranean?”

Since conceiving the Panama Posse in 2017, Petutschnig has aimed at expanding the routes (this year he added Cuba, Belize, the Cayman Islands, Jamaica and Columbia to the route), which means securing partnerships in new regions with the likes of marinas, fuel providers, excursion companies and provisions assistance – all in an effort to offer the Posse group reliable, quality services at a discount. The discounts are the other big reason the Panama Posse rally is a huge draw. “Who doesn’t love a deal?!” laughs Petutschnig. Marinas will offer participants anywhere from 10 to 50 percent off regular prices. Currently each of the various Posse routes averages one cooperating marina every 450 nm but he’d like to see that ratio increase.

Marina access is certainly having a hand in determining David O’Donahoe’s ultimate destination. His main concern is finding safe and economical places to leave his Nordhavn 46 for chunks of time as he continues to work in Boston. He isn’t sure if he’ll stick around Mexico like many of the other Nordhavns, or try to get to the Caribbean. With O’Donahoe based in the northeast and Navigator in La Paz, it’s been tough getting much boating time in. “COVID is a big driver towards getting the boat to the eastern U.S.,” he said. “I haven’t been able to use it much this year because of all the travel restrictions in place.”

Like everything else, COVID has impacted the Panama Posse and Petutschnig has had to accommodate for the revised safety regulations, which differ in every country. COVID-safe boat handling procedures are covered in seminars and there are now more options for anchoring and “dockside” drop off of supplies and provisions, plus adjustments were made to excursions and activities. “We stepped up our game as much as we can, but we don’t want it to be all about COVID. We want people also thinking about fun.”

For all the additional planning it’s required, Petutschnig feels the pandemic has likely helped grow the attendance rate. “There’s no doubt people consider cruising a socially-distant and safe activity.”

Three-time Panama Posse veteran Eric Bescoby certainly isn’t letting COVID affect his plans. After having gone from Mexico to Panama two years ago, Bescoby is now part of the Counter-posse, with plans to bring his Nordhavn 40 Sprezztura from the Las Perlas Islands back to Mexico. “I feel safer on the boat,” said Bescoby. “I just use precaution when I go into the villages and towns.” 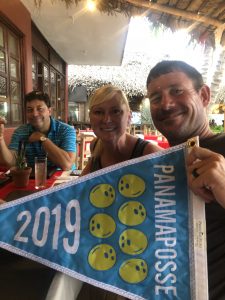 He credits Petutschnig as being an extraordinarily organized, accessible and forward-thinking leader – and the key to the Panama Posse’s success…not to mention the laundry list of benefits to be enjoyed by participants, which Bescoby rattles off in an email. If ever there was a poster child for the Panama Posse, it would be Bescoby who has enlisted in three different pods; in addition to the Posse and Counter-posse, he joined the Caribbean Route last year. It’s a rally philosophy developed especially for someone with Bescoby’s cruising mentality: “I like to stay in a place for as long as it’s fun. Then I move on to the next place.”

In a few weeks, Bescoby and his posse will be bound for Costa Rica. Ultimately he plans to reach La Paz by May. After that, who knows? Perhaps he’ll stick around long enough to join his fourth Panama Posse next year…

For information on participating in the Panama Posse, visit panamaposse.com.