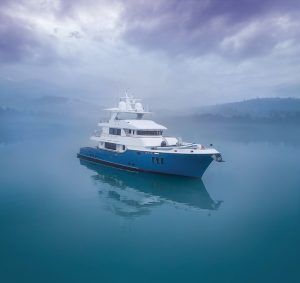 This past weekend, Nordhavn 100 Serenity competed in the World Superyacht Awards (WSAs) in the category of “Displacement Motor Yachts below 299 Gross Tons”. Serenity did not win but in this case, it was an honor just to be nominated.

And yes, I really do mean that.

The glamorous world of Superyacht Awards competitions is as lavish and exclusive as the Hollywood movie awards circuit and comprised mainly of European builders and designers and other international who’s whos.  It’s a coup to be included and recognized in this arena, especially so for an American trawler builder.

There we were in London, seated once again around a table at the WSAs, with one of our glamorous workhorse Nordhavns vying for “best of” honors. Our PAE team’s misfit status on display as we awkwardly double-air kiss and speak with slow, clunky American accents. We are different from the rest of this crowd and I felt it was obvious that we didn’t fit in. But somehow our Nordhavn 100 – also very different from the rest of the super modern, glitzy yachts that flanked her – commanded respect. Nordhavns are utilitarian by comparison, yet so streamlined and elegant and luxurious, they have become accepted by this elite group.

Serenity is no fluke. She is, in fact, the fourth Nordhavn to be nominated in the past seven World Superyacht Awards, which are sponsored by Boat International magazine and considered the crème-de-la-crème of mega yacht honors. None of those other Nordhavns managed to capture a coveted WSA either, but that’s OK. Nordhavns are a juxtaposition that seems impossible to reconcile – a tough-as-nails boat with unparalleled capability and engineering, mixed with styling so elegant they have enticed movie stars, heads of Fortune 500 companies and famous musicians.

Back in the 1980s, the first Nordhavn 46 was introduced. It took almost 10 years for people in the industry and the public to understand exactly what this boat was about. There are now 600 Nordhavns that have been delivered (two more offloaded in Florida today), and she has become the poster child for adventure. People get her now to the point that the brand has evolved into a cult status. Still, I am no more proud today than I was when we launched that first N46. And despite our fourth loss at the WSAs, I come away an extremely proud nominee, proud of PAE/Nordhavn, our builders, our vendors and our wonderful Nordhavn owners. No one person, and certainly no single boat brand, can be everything to everyone. But with savvy and humility, a Nordhavn comes close to straddling that line. This was more than just a nomination. This was confirmation of Nordhavn’s place among the world’s best.

Dan Streech is the president of Pacific Asian Enterprises Inc.

The Nordhavn 80 has arrived at Nordhavn Southeast!