The accolades for the Nordhavn 41 keep pouring in as it was revealed that the model has earned the title of Power and Motoryacht’s boat of the year as selected by its readers. Based solely on analytics, the N41 garnered more page visits than any other new boat model featured in PMY and on pmy.com this year. Statistics were measured from January 1 up until the last issue’s press time in late October.

PMY’s Reader Choice awards is set up as a completely organic competition: viewing habits of the website’s readers are tracked throughout the year and accumulated. It’s a completely unbiased competition based entirely on mathematics. Quite simply, the Nordhavn 41 was viewed more than any other boat on powerandmotoryacht.com this year.

The fanfare surrounding the Nordhavn 41 hasn’t let up since the company announced the new model just over two years ago. With a size and price tag that makes it a viable option for a huge category of boating adventurists, it has broad appeal. And it’s reflected in the number of orders taken over the past 18 months (42) as well as this latest recognition by PMY readers. 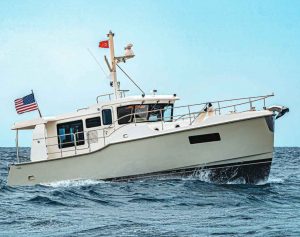 This is the third year PMY has taken to letting analytics predict best boat of the year instead of the former opinion-driven EOY Editor’s Choice, which always ended up in conflict, according to PMY editor-in-chief Dan Harding. “By looking back at our website analytics, we are able to determine the boats that most strike a nerve with [our readers]”, he said. “Last year’s winner was Jimmy Buffet’s boat so [the Nordhavn 41] is in good company!”

Another indicator of the heavy interest in the N41 is the median time spent on the page. Pmy.com visitors spent an average of 2:22 reading about the Nordhavn 41, Harding said, indicating an above-average length of time. “It’s safe to say the [Nordhavn 41] story really resonated.”