The COVID-19 pandemic has wreaked havoc across the globe, and certainly has had an impact on the schedule of the Nordhavn 41. After production fits and starts due to changing Corona virus-dictated government regulations, the first two N41 hulls look poised to ship from the Turkish factory within the next two weeks. 4101 and 4102 will deliver to California in mid-September.

Early performance indications from seatrials have been encouraging. Hopes are that the N41 will come close to mirroring the high performance levels indicated by initial computer modeling. While the design continues to undergo its CE Category A testing, it has hurdled a crucial first step with the completion of the CAT A stability requisites. “A lot of effort by (Chief of Design) Jeff Leishman and the design team went into a very slippery hull design and one of the smallest offshore boats to pass CAT A stability criteria,” said Nordhavn’s Engineering Manager, Phil Arnold. “We are all very proud of that.” 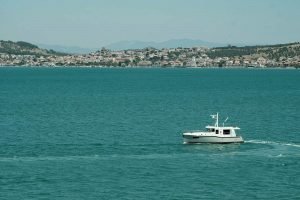 In-water analysis of the N41’s range, speed and fuel burn have begun with promising initial results – especially when compared to its predecessor, the Nordhavn 40. The N40 holds a record for fastest circumnavigation by a production powerboat. It must be emphasized that fuel burn and range numbers are only estimates at this point and may evolve with additional testing.

The Nordhavn 41 has been incredibly well-received by the marketplace, with reservations on 18 of the first 23 hulls taken prior to the delivery of the first boat. Buyers will soon be able to seatrial hull #1 when it arrives in Dana Point, CA. “I’m really excited about this new model,” said Nordhavn vice president Jim Leishman. “I think when people see this boat in person for the first time, they are really going to be wowed.” 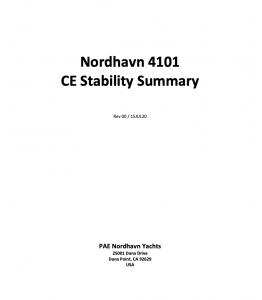 The Nordhavn 71 project is well underway