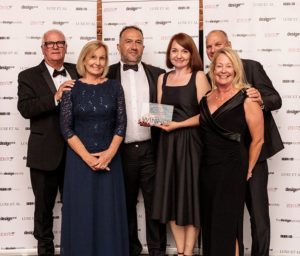 The Nordhavn 41 beat out seven other boats to capture the award for Best Motor Yacht Under 25 Metres at the 11th annual International Yacht and Aviation Awards (IYAA). Jeff Leishman, Nordhavn’s Chief of Design and his brother Jim Leishman, vice president of Nordhavn, accepted the award at the gala ceremony held August 20 in Venice, Italy. They were accompanied by Murat Telgeren, president of the Telgeren & Partners shipyard in Turkey where the N41 is built, as well as Mine Aktuna, who is responsible for the N41’s interior design. This is the second IYAA award for Nordhavn, which took home the prize for Best Motor Yacht Design in the 25-40 Metre category in 2017 with Nordhavn 96 Lacey Kay.

“We are extremely grateful to have earned the win,” said Jim Leishman. “We are very proud of the Nordhavn 41 and all the effort that has gone into her design. It’s an honor to have been recognized among a field of top-notch boats.” The N41 was the smallest nominee in the category.

The Nordhavn 41 has been incredibly well received by the yachting market, with more than 40 hulls reserved for purchase.