Share on facebook
Share on twitter
Nordhavn relocates its northwest sales and service hub to Anacortes; Factory partner South Coast Marine opens new Taiwanese facility
Nordhavn is ramping up efforts on both its sales and production sides with the launch of a new Northwest Sales office as well as a new state-of-the-art factory in Taiwan. Both entities are aimed at boosting the clientele experience when it comes to researching, purchasing and building a Nordhavn. 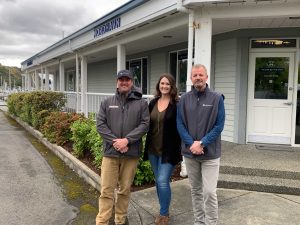 This week, Pacific Asian Enterprises (PAE) officially opened its new Northwest Sales and Service office in Anacortes, WA. The new location will serve as the brand’s top client service resource in the cruising-rich Pacific Northwest region. Catering to both current and prospective Nordhavn owners, the brand new office is located in Cap Sante Marina where many Nordhavns are currently berthed. With Anacortes being a gateway port to Alaska and Canada-Pacific cruising, the office will serve as an ideal jumping off point for northern destinations or a sojourn for those making the return trip down the coast.
The newly-launched Nordhavn Yachts NW will be managed by longtime salesperson Devin Zwick, who has spent the past three years establishing the brand’s presence in Anacortes. Joining Zwick is Tom Gilbert, a yacht broker and marine industry veteran who spent 15 years running Cap Sante Yachts, as well as Julie McKee, an experienced yacht sales admin who will serve as NNW’s office manager.
By putting down stakes in Anacortes, the company aims to aid buyers with their yacht shopping research experience, primarily by increasing their exposure to Nordhavns. “With the number of Nordhavns in this area, our team will be able to more easily accommodate buyers looking to inspect different models in our line-up,” said Zwick.
For the past 18 years, Nordhavn Yachts Northwest had been based on Seattle’s Lake Union. NNW will continue to maintain a presence in Seattle with broker Mark Gilbert representing Nordhavn there. Outgoing sales manager Don Kohlmann will relocate to southern California and work out of PAE/Nordhavn headquarters in Dana Point.
Nordhavn Yachts Northwest will continue its stellar partnership with nearby Harmon Marine, which operates as Nordhavn’s preferred service provider in the area. Harmon began its relationship with Nordhavn over a decade ago at its original location in Dana Point, CA, and has developed into one of the premier Nordhavn maintenance specialists.
A grand opening event will take place Saturday, June 25. (Click here to RSVP your attendance.) “I’m really excited for this opportunity to serve as the foremost Nordhavn sales and service authority in the Pacific Northwest,” Zwick said. “Establishing this office reflects PAE’s continued commitment to offer the highest caliber of customer support to the Nordhavn community.”
Nordhavn’s worldwide sales and service locations can be found in Dana Point, CA; North Palm Beach, FL; Anacortes, WA; East Greenwich, RI; Southampton, UK; Gocek, Turkey; and Brisbane, AUS.
* * * * *
In an effort to expand production capability, Pacific Asian Enterprises (PAE), Inc.’s long-time partner factory, South Coast Marine (SCM), has built a brand new companion yard to its main China facility. Located in Taiwan, the new yard will house the production of the Nordhavn 625 and Nordhavn 80. 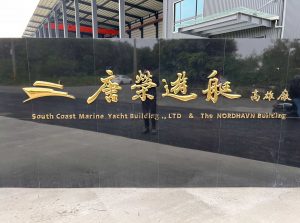 Thanks to an order book that has grown increasingly full the past two years, SCM sought out to improve its production capabilities. Obtaining additional space was the first necessary step but finding ways to increase efficiency would prove crucial. SCM president Tsai Wan Sheu studied the manufacturing approach used by PAE’s other partner factory, Telgeren & Partners in Turkey, which builds the Nordhavn 41 and 51. Telgeren implements the external fabrication of furniture and other sections of interior which are then placed into the yacht modularly, rather than SCM’s practice of crafting the interior entirely from within. Mr. Wan Sheu embraced the new production style and invested in state-of-the-art specialized patterned carpentry and cabinetry machines. The building was also designed with specific zones dedicated to different parts of construction such as painting, milling and equipment storage. “We couldn’t be more excited about this new modern facility South Coast has produced,” said Mike Jensen, project manager of multiple Nordhavn models built by South Coast, including the N625.
The new SCM yard is located in Kaohsiung, about an hour south of PAE’s other partner factory, Ta Shing. In moving to Taiwan, the new SCM facility also seeks to combat tariffs imposed on Chinese-built boats.
Last month, SCM completed the relocation of the N625 and N80 molds to the new Taiwanese facility. Work is currently being done on the first of the N625 hulls and N80#4 expects to begin laying up next week.