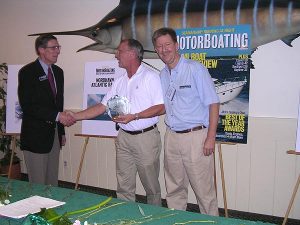 PAE was honored with a Best of the Year award from Motorboating magazine last week for its efforts in conceiving and completing last summer’s Nordhavn Atlantic Rally . Referred to as “an experience that opened up new horizons” for cruisers, the Rally was named Best of 2004 in the Adventure category by the magazine’s editors.

The annual awards, formerly known as the Editors’ Choice Awards, have long honored innovative and creative additions to the boating experience across several categories. In the past, companies have been recognized typically for industry-impacting products, but the producers decided this year to expand the awards to include not only products, but people, places and events that have helped to shape the boating world.

A crowd of about 100 from across the marine industry gathered at the Miami Beach Rod & Reel Club during the recent Miami International Boat Show to applaud this year’s winners. PAE’s President Dan Streech and Vice President Jim Leishman accepted the prestigious award from host Peter Janssen, editor-in-chief of Motorboating and Yachting magazines.

“Nordhavn created an historic event,” Janssen remarked to the crowd. “It created an experience. It built dreams.” Janssen provided a first-hand perspective of the Rally as an embedded journalist on board the lead escort boat, Atlantic Escort when he and fellow Motorboating editor, Brad Kovach, crewed the last leg from The Azores to Gibraltar. “In creating the NAR, Nordhavn opened new horizons not only for those of us on the 18 participating boats, but for all of us who dream of doing that sort of thing someday. They contributed greatly to the dreams and hopes of all recreational powerboat owners.”

Spurring dreams and making them reality was, in fact, the motivation behind Jim Leishman’s concept for the Rally. There was never any question whether the boats could do it, but I wanted to prove to these owners that they could do it, too, Leishman said.

The Rally was followed by thousands on-line, covered by dozens of magazines both nationally and abroad, and the NAR movie is being shopped by television networks. But being recognized as among the “Best of 2004” is truly gratifying, said Leishman. “These editors see greatness in the industry on a daily basis. It is an honor to have been singled out for our efforts.”

Putting a wrap on the NFF details

The daily blog of the delivery of N60 “Door Prize”