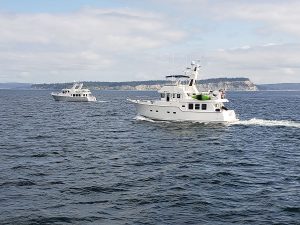 Nearly two dozen sets of owners on 17 boats will be meeting up the early next month for the 2nd annual Nordhavns Around Puget Sound (NAPS), where like-minded Nordhavn owners who happen to be in the area meet up and enjoy each other’s company.

The event, happening May 3-5 at Cap Sante Marina in Anacortes, WA, will be a weekend filled with dock-walking, potluck suppering, boat visiting and happy-houring – pretty much a typical weekend for Nordhavn owners who stumble upon each other at any given marina. (Earlier this month a handful of Nordhavns impromptued a smilar-type gathering down in the Bahamas.) What sets NAPS apart is that there is some loose organization to it. Kevin and Alison Jeffries, owners of Nordhavn 55 Red Rover, conceived the idea last year and it took. Non-Nordhavn owners might be wondering if there is more to it than just a weekend hang-out. After all, there are owners traveling sans boat from the likes of Alaska and Arizona to attend. Why is NAPS such a can’t-miss event?

The Jeffries are partakers of the bigger, more formal Pacific Asian Enterprises (PAE)-sponsored weekends. “We love the hoopla and activities of big events like PAE’s 40th anniversary gala,” said Jeffries. But, he says, the best part of those weekends are the socializing and meeting new owners. “The thought of a few days [focused] just on socializing and touring each other’s boats was appealing. And it seems to have struck a chord with others.” Has it ever. Nearly 50 people have RSVP’d to NAPS 2019. 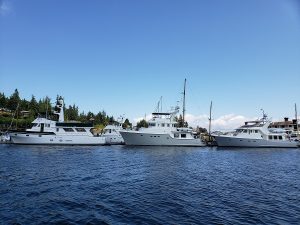 This year’s attendance looks to surpass the inaugural event’s total of 11 boats and 4 sets of owners without their boat. Five of the boats in attendance this year will be repeat NAPS revelers. Jeffries says he hopes to get even more owners to join the festivities. With just weeks to organize and get the word out, last year’s event still attracted 30 attendees. Jeffries guessed that with a bit more notice, the guest list would increase, and he was right. “[Currently] we’re up to almost 50 people and hope to get more!“ The change in date seems to be working in their favor as well, holding it at a time when most are just starting their PNW cruising season.

The Jeffries have taken over as Nordhavn’s unofficial social committee chairs in the PNW and are in the middle of planning an even bigger event happening later this year. The Nordhavn Taco Run 2019 is a group of Nordhavns that will be traveling from the Pacific Northwest to Mexico. The group will depart Seattle in mid-September with Leg one stopping in Dana Point, CA to coincide with the Nordhavn Film Festival. Additional boats will join the convoy in southern California for Leg two that has them continuing on to Mexico in late October.