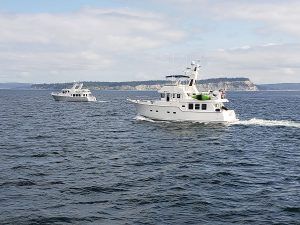 This weekend marks the first gathering of NAPS, otherwise known as Nordhavns Around Puget Sound. This isn’t to be confused with NAP (Nordhavn Atlantic Passage) or the other NAP – Nordhavns Across the Pacific. (We really need to start naming our rendezvous using words beginning with other consonants.) At least 15 sets of owners will be joining together at the Port Ludlow Marina to share in what Nordhavn owners like to do most – other than cruising – and that is to be in each other’s company.

This second greatest Nordhavn pastime is what’s driving the informality of the weekend. A BYOB dockside happy hour Friday evening will be followed up by a bbq dinner with potluck-style dessert course Saturday night. There are no other daytime activities, no seminars, no excursions planned. Just time to visit with other owners, take a peek inside their boats, enjoy the local scene and simply relax.

The gathering is the brainchild of Kevin and Allison Jeffries, owners of Nordhavn 55 Red Rover, which is pretty remarkable in its own right considering only a few years ago the couple would tell you attending social functions was not their cup of tea, and they certainly wouldn’t ever think of organizing such an event. “Allison and I are not big on large group events full of small talk,” said Kevin Jeffries. “We don’t really seem to click in those type of social situations. But as everyone knows, this Nordhavn Thing is different.”

The Jeffries purchased Red Rover two years ago and during the course of ownership have attended a few different owner gatherings. Whereas they loathe the “What do you do, who do you know?” line of questioning that usually accompanies parties filled with strangers and acquaintances-at-best, the Jeffries walked into the Nordhavn NW office’s cocktail event last January at the Seattle Boat Show and were able to connect with everyone there. “This was like walking into a room [filled with] 80 of our best friends!” said Kevin. “Most we had never met in person before, but we could have stayed and talked all night.”

They had a repeat experience a few months later at PAE’s 40th Anniversary Gala. They flew home to Seattle buzzing from the camaraderie of the weekend and conjured up the idea of a small, informal congregation of Nordhavn owners who planned to be in the area. After learning that many of their new Nordhavn friends had summer cruising plans that included the Pacific Northwest, they knew they had a solid foundation for a party. Posts about NAPS to their personal blog, the Nordhavn Owner’s Group and the Nordhavn Cruising Owners Facebook group, brought in a flurry of RSVPs.

Of the 15 separate owner factions coming to the get-together, 11 are attending with their boats, and four other couples – including one flying in from Hawaii – will be landlubbers.

As to whether NAPS will go on to be an annual event remains to be seen, said Kevin, but he’s counting on it based on the enthusiasm behind this year’s event. He speculates that future gatherings would likely be pushed up to the start of the PNW’s summer cruising season; this year’s attendance was probably half of what it could be due to the short notice, he said, but it goes to show what little prompting Nordhavn owners need to hang out with each other. Kevin adds: “One of the owners coming next weekend said it well: ‘This belonging stuff is very cool.’”