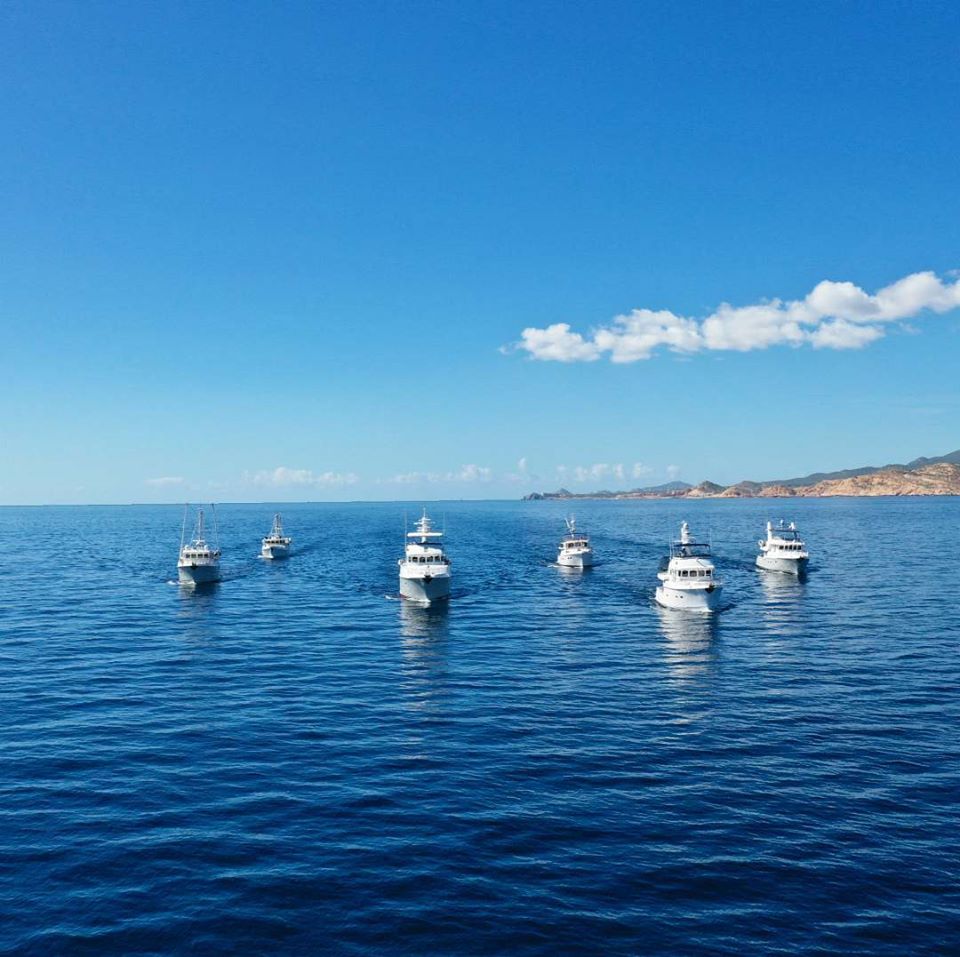 The Nordhavn Taco Run, a convoy of six Nordhavns – some of which departed the Pacific Northwest two months ago, concluded the final leg last night with an early evening arrival to San Jose del Cabo. Along the way, the boats weathered a few dicey storms but overall had great weather to cruise around Baja Mexico and points south.

The Taco Run was organized by Kevin and Alison Jeffries of Nordhavn 55 Red Rover. The Jeffries, along with three other Nordhavns, made the trek down from near Seattle. They stopped in Dana Point in October to attend the Nordhavn Film Festival and then met up with the remaining members of the convoy to commence the official start of the trip.

All the crews will celebrate a final dinner tonight and then go their separate ways, but hoping to catch up with one another over the winter. Overall, the trip went off without a hitch, and everyone had a terrific time, said Alison. “It was a great trip. We are so fortunate to get to do this on such an amazing vessel. She keeps us safe.”

Below is Alison’s account of the past four weeks:

Who is running for tacos with us?!

We left San Diego on October 27th for Ensenada and had a wonderful greeting from Fito Espinoza and the team at Marina Coral.  One highlight of our time in Ensenada was a winery dinner set up by Vince and Linda. We took a van to the winery, Misiones de California, and had an incredible wine overview and then dinner in a wine cave.  The winemaker talked with us for a few hours and his daughter, a gourmet chef, made us dinner from an outdoor kitchen (that seemed to have been set up just for the evening).  The food was incredible!  It was amazing to look around the table and see these fantastic people, all brought together from our ownership of a Nordhavn trawler.

We left Ensenada on November 1st and headed south on an overnight trip to Bahia San Quintin, where we arrived just after daybreak.  San Quintin was a beautiful stop that involved buying lobsters from the local panga drivers and beach exploration.

From San Quintin we did another overnight run to Isla Cedros.  We had incredibly settled weather and were able to anchor on the east side of the island in the “La Palmita” anchorage area, just north of Cedros Town.  We arrived in the morning and watched as the island grew out of the ocean as the sun came up.  Amazing.  With everyone anchored in the flat water adjacent to the island, an impromptu swim step party happened, with dinghies and paddle boards tied to Red Rover’sstern.  The swim step party of course involved margaritas and cervezas and then quickly turned into an actual swim party with almost everyone hopping in the warm water.  The next night we celebrated Jeff and Shannon Huber’s birthdays (yes they have the same exact birthday!) with a “fish fry” on Epoch, leveraging all of the fish we had caught on the way to Cedros.  Great fun all around!

From Isla Cedros we day hopped to Turtle Bay where we arrived just hours before the 155 boats from the Baja Ha Ha descended upon us.  We spent a couple of days in Turtle Bay, enjoying the friendly town, tacos on shore and a search for WiFi (which we didn’t really find).

We left Turtle Bay for another night run to the anchorage just behind Punta Abreojos. This turned out to be a rolly anchorage and we spent just one night resting there.  The rolly factor did allow us all some practice with our flopper stoppers – impressive change in the amount of roll with these great devices deployed!  Partida, the N46 with two flopper stoppers barely seemed to move as the swells rolled in.  We were too early for the gray whales that come to the San Ignacio Whale Park by Abreojos sadly…

From Abreojos we split (just briefly) into two groups.  One group wanted to do a day run to Bahia San Juanico and another wanted to go straight across the bay to Bahia Santa Maria and Mag Bay.  So we split briefly!  The smaller group arrived at Bahia Santa Maria at daybreak the next day and decided that the shore landing was too difficult for dinghies with dogs and moved along to Mag Bay. We all were reunited a couple of days later in Man-o-War Cove in Mag Bay.  Days were spent beachcombing, checking out the cool whale camp, lazing around on a gorgeous white sand beach, exploring the sand dunes and dinghy cruising into Puerto San Carlos.  We knew that Tropical Storm Raymond was approaching and two of the boats had commitments in Cabo/leaving from Cabo.  Gitana and Last Arrow left before the storm and had a calm ride to San Jose del Cabo.  The remaining five boats anchored and dug in.  The storm ended up falling apart and becoming a post tropical depression when it reached us, which really amounted to some wind and some rain.  Nothing we couldn’t handle!

A portion of the Baja Ha Ha sailors remained in Mag Bay as well, choosing to wait out the storm north of Cabo, where it was originally anticipated to hit.  These fun folks threw a lobster fest on the beach the next day and invited “the Nordhavn fleet” to join them.  Over 50 lobsters were grilled and consumed at the town’s restaurant, which was closed for the Mexican holiday, but which the owner gave permission for us to use.  Just another example of the warm hospitality we have felt everywhere we have been in Mexico.

We left Mag Bay and made the 26 hour run to San Jose del Cabo on November 20th and we arrived here yesterday.  Just before our arrival we had a drone photo/film shoot with all five of us and a Selene that weathered the storm in Mag Bay with us and completed the last leg of the Taco Run with us. Scott Allen directed the formation of the fleet from his flybridge, Kevin flew the drone and I sweated profusely at the helm of Red Rover hoping that the boats immediately off of my port and starboard would be fine, and that a whale would not surface immediately in front of us!  There was a lot of honking of horns and crazy conversation on the VHF, but all went well!  We all checked into the marina and then promptly moved to the marina bar for tacos, hamburgers and margaritas.

Tonight we’ll celebrate with a dinner at Flora Farms, as the fleet begins to move in individual directions.  It has been a fun journey where many participants have remarked, it is like family, isn’t it?