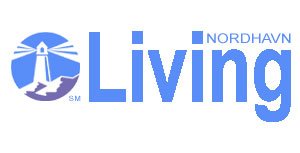 Is Claudia Jackson the Martha Stewart of Nordhavn? Maybe not, but she did found a lifestyle website for Nordhavn owners that Stewart would likely approve of. Last month, Jackson launched NordhavnLiving.com, a DIY, style, living solutions and helpful hints website aimed at making life aboard Nordhavns more enjoyable and efficient.

Jackson and husband Steve live on board their Nordhavn 47 Ranger full-time. They have enjoyed being involved in the Nordhavn community, and like all Nordhavn owners, love the impromptu gatherings that break out when Nordhavns happen to be tied up in the same area. Steve is still working so the couple often are berthed at their Savannah, GA marina, which means they go stretches of time without the company of other owners. They do catch up on the status quo via the Nordhavn Owners Group (NOG), but for Jackson, it wasn’t quite enough. Although the NOG is not exclusive of anyone (in the Nordhavn family), Jackson found that she and some of the other female owners felt intimidated by the mostly technical-driven conversations that dominate the forum. “Some of the ladies I talked to said it would be nice if (the women) had a spot,” she said. “The NOG is great for anchoring and volts, but women want to know where you store things.” 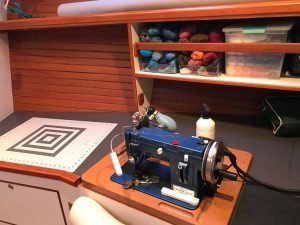 When she was in the publishing world, Jackson ran a successful authors forum and wondered what would happened if she applied that same formula to a chat site where Nordhavn owners felt comfortable talking about non-technical items, like decorating and storage solutions. NordhavnLiving.com launched about six weeks ago, and currently there are more than 160 members who log on to share, peruse and comment on ideas suggested by members.

Some of the more interesting tips include how to utilize seemingly dead space behind locker doors, how to prep food storage for long passages, and newspaper origami pet waste solutions. “I’ve found that people have some of the same questions I do,” said Jackson. “[Steve and I] have been boating for 40 years and I’m still learning stuff. I’m learning from these [posts].”

Jackson helms the site herself, approves the members, manages the postings and fronts the monthly hosting fees. But, she says, it’s a labor of love, with the great ideas she gleans an apparent tertiary byproduct of the work she puts in. The greatest pleasure derived is knowing she has created a community where the goal is people helping people. “It makes my heart glad when I see people posting and talking with each other,” she says. “I saw a need and found a way to help others and that makes me happy.”

And it certainly has brought the world of Nordhavn, which is spread far and wide, just a little bit closer. Jackson talks about befriending Nancy Goldberg, whose travels are well-documented on the cruising blog of her N50 Duet. Although the two women sit on opposite sides of the globe, they started bonding over spice storage and boat doggies, and now chat regularly about less housekeeping-y issues.

Not even two months in to the venture, Jackson said moderating NordhavnLiving.com certainly isn’t a full-time commitment, however it does provide the perfect amount of busy-work when hanging at the dock. “This keeps my brain going, plus I can only knit and crochet so much!” she quips.

So what is the end goal for NordhavnLiving? To keep it going for as long as it’s helping, says Jackson. “It’s nice to have a community where like-minded people can get together. It makes life onboard easier and we are learning a lot from each other.”