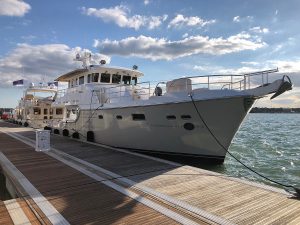 The fall boat show season is legitimately underway with the first boat show officially in the books and final line-ups for other shows shaking out. After having a successful turn at the Newport International Boat Show last week, focus now switches to the shows ahead.

We have just reached the half-way point of the Southampton boat show, so those in Europe still have a chance to visit the gorgeous Nordhavn 63 Due North on display through September 23.

Meanwhile, Ata Marie, the like-new Nordhavn 56 Motorsailer that wowed folks in Newport, begins her trek southward the end of this month in preparation for the U.S. Powerboat Show in Annapolis, which kicks off October 11. If you are the slightest bit interested in the versatile, efficient motorsailer style yacht, this one cannot be missed. While in Newport, our staff consistently fielded questions regarding the year of the boat – and most didn’t believe us when we told them! Granted, Ata Marie is in such good condition, it is difficult to fathom she is 8 years old. While not the “standard” trawler most associate with Nordhavn, the MS is worth the look. She was built at the Ta Shing yard and gives a feel for the type of craftsmanship you’ll get from the 68 and 76.

Nordhavn’s biggest display of the year traditionally comes at the Fort Lauderdale International Boat Show (FLIBS). This year’s really packs a punch with the debut of the Motoryacht edition of the Nordhavn 59 Coastal Pilot, but also – just announced – a beautiful Nordhavn 76. We have other surprises in store, so if you are a serious candidate for a new Nordhavn, please contact us. Eligible prospects will be given opportunities to take part in special events going on at our display this year.