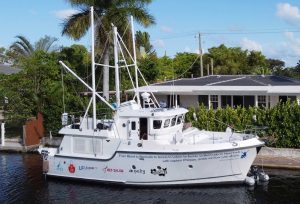 Today marks the beginning of a double ocean crossing by a Nordhavn 40. Hull number 16 will cross from Miami to Lisbon, Portugal, and then back again. With almost 200 ocean crossings completed by Nordhavns in the books, a crossing of an ocean by a Nordhavn – even a double-crossing such as is the case here –isn’t exactly front page news. But this ocean crossing journey is different. This traverse of the Atlantic Ocean is being completed by a disabled owner. By all accounts, it is the first motoryacht trans-oceanic crossing by a disabled person at the helm.

Philippe Guglielmetti is not, and never was, your average person. Guglielmetti was born in France and grew up an avid outdoorsman. He was also a brilliant engineer and all-around over-achiever who founded the successful e-commerce company Integra, an international business that counted high-end corporations such as EuropCar among its clients and staffed more than 1,100 employees. At the height of his success, Guglielmetti sold Integra to Verizon and went on to establish other tech companies, and for a time dabbled in boat building as the CEO of French yacht brand Arcoa. 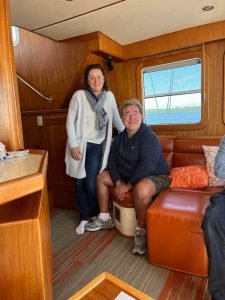 In 2015, the seemingly otherwise healthy Guglelmetti was in a taxi in Paris en route to a fundraising event. As the car zipped passed the Louvre, Guglielmetti felt a strange tingling in his leg, the first signs of the stroke that would ultimately change the course of his life.

Guglielmetti suffered a pontine hemorrhagic stroke, which occurs in the portion of the brainstem responsible for a number of autonomic nervous system functions such as motor function, pain response and sleep-wake cycles. Guglielmetti spent a week in ICU and endured months more in the hospital communicating only through the lifting of fingers.

As he began a determined road to recovery, Guglielmetti set goals for himself: walking across the Golden Gate Bridge, a family trip to Vancouver, and finally, a solo return trip to the Hopital Lariboisiere in Paris to visit the staff there who saved his life. The more hours he dedicated to therapy, the more trips he scheduled for himself to places like Baja, Mexico, and Costa Rica. Guglielmetti discovered warm tropical climates suited his body best prompting him and his wife, Florence, to move to Miami. Surrounded by boats, he was reminded of his time at Arcoa and how much he enjoyed roaming around the French Riviera. He decided it was time to look into boating again but for more than just puttering about in Biscayne Bay. He wanted to combine yachting with his love for travel and his insatiable need to prove he could do things independently.

During his years of recovery, Guglielmetti forced himself to conquer physical feats on his travels such as hiking through the jungle and swimming in the ocean. While his body continued to meet challenges, it was important that he remain mentally strong to overcome setbacks, of which there were many, and so he spent a month at an Ashram in Texas to focus on remaining disciplined about the new ways he needed to approach life. 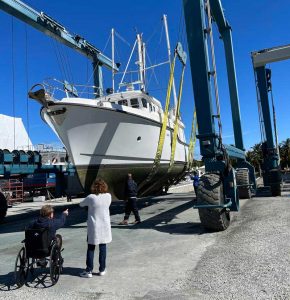 It was all a means of working toward his most ambitious goal yet: crossing an ocean in a boat. Through research he discovered Nordhavn as the brand to deliver him safely and as comfortable as possible across the Atlantic. The Nordhavn 40’s track record was undeniable and in February he closed on a 2001 Nordhavn 40 – the exact boat model, year and all, to set a record for its circumnavigation of the globe. But before Guglielmetti could even board the boat to inspect her, there were issues. His first viewing appointment of the brokerage N40 was at high tide and the fixed docks made it difficult for anyone to climb up to the boarding door; for Guglielmetti, who was in a wheelchair, the task was impossible. Obstacles like these were going to be part of the equation and Guglielmetti needed to formulate ways to address them, and he refused to let this one – so early in his boat voyage plan – deter him.

Prior to embarking on his ocean voyage plan, Guglielmetti set out to write a book about his experiences. He co-authored Embracing Life After My Stroke: a stroke survivor’s story about his journey to recovery. It detailed the powerful role mental toughness and determination played in his success; his strategies to strengthen his body and mind; and how the combination of it all gave him a fighting chance in the face of adversity. Guglielmetti would need to call upon the contents of his story to move forward with his boating journey. 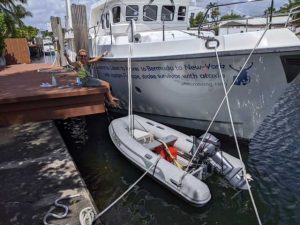 Doubts persisted as to whether sheer determination could make up for the physical qualities Guglielmetti lacked for a trip like this. Several days out in the middle of the ocean requires a solid equilibrium and a strong foundation. Plus, the Nordhavn 40’s raised pilothouse configuration means maneuvering up several steps into the pilothouse and down into the staterooms under unstable conditions. Guglielmetti knew that to make his dream come true, he would need a team – and the boat – to back him up.

Customizations to make operation more manageable for Guglielmetti include a joystick in lieu of the ship’s wheel and the addition of a helm chair (the standard N40 did not come equipped with one), active stabilizers to keep the boat steady, as well as exercise equipment to allow him to continue his physical therapy. 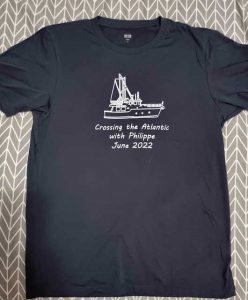 When Guglielmetti shoves off aboard his boat, which he aptly named Embracing Life, he will have an international support crew of specialists to ensure his health and safety along the way. They include a Belgian Neuroscience researcher who will monitor and study Phillipe’s brain activity; a French writer (based in Florida) to report on the trip for his home country and the American writer who co-wrote Philippe’s book; as well as Philippe’s captain’s-licensed sons and son-in law; a film-maker to document the trip and a handful of other friends, all rotating on various legs. His shore side crew includes Florence, their daughter, a medical nurse friend of the family, and a weather router. 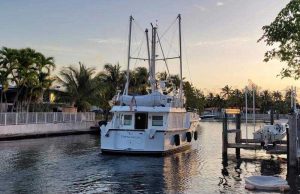 Although Guglielmetti only kick-started his double-Atlantic crossing into gear at the start of this year, he has said it’s an idea he’s had for 20 years. Only now, it is not merely a dream he wishes to fulfill but a message he wants to get across to the world. “Before my stroke, I did it all. I skied, hiked, mountain biked, drove motorcycles, yachts, and went scuba diving,” writes Guglielmetti. “[Now] I can’t write, drive, nor stand for very long …My recovery has allowed me to embrace that I don’t need to be the same man I was before. I have transformed… My message is that it is possible to defy the odds.”

Follow Guglielmetti along his journey as he brings his Nordhavn 40 from Miami – Bermuda – the Azores – Portugal, and back again, at philipcrossing.com.

The Nordhavn 71 project is well underway