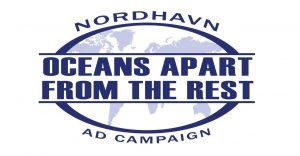 Our first advertisement in the campaign, the Nordhavn Passagemaking Statistics ad, ran in the September 2017 issues of various boating magazines. It presents a list of cruising achievements made by different Nordhavn owners. Other brands boast about a single yacht making it around Cape Horn or having crossed an ocean. But Nordhavn’s track record of well over a hundred ocean crossings, multiple roundings of Cape Horn, and record-setting expeditions is beyond compare. See the proof below. As always, even right now, yet another Nordhavn is making some sort of passagemaking milestone. We’ll be consistently updating this database, so check back often.

As always, we invite your questions at info@nordhavn.com.

• Over 150 Nordhavns have successfully crossed the Atlantic, Pacific and/or the Indian Ocean

• RELIANCE, a Nordhavn 76, has visited the continent of Antarctica

• Dozens of north – south transits of the South China sea