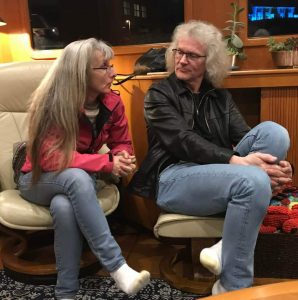 The Seattle Boat show opened on Friday, but things really kicked off Saturday night at the annual Nordhavn Owners gathering hosted by the Northwest office. Held at the Seattle Yacht Club, around 40 owners, distinguished guests and PAE staff joined to celebrate all things Nordhavn, and especially to applaud James and Jennifer Hamilton, who earned their Extreme Latitudes Cruising pennant and 70,000 nm distance pennant.

The Hamiltons have become two of the brand’s staunchest supporters, and most shining examples of what is capable when you own a Nordhavn and have the mindset and gumption to do it. When they reached Amsterdam earlier this fall, the odometer of Dirona was showing 70,123 miles cruised since they took delivery in 2010, nearly all of which were amassed with just the two of them aboard. They could have earned two circumnavigation pennants by now had they not decided to double back routes or take on courses that did not result in a complete a circle. Still, their achievements of exploring the farthest reaches of Norway and the Arctic Circle earned them the coveted and rarely achieved Extreme Latitude pennant, which they humbly accepted from PAE President Dan Streech in front of the packed crowd of admirers. “What James and Jennifer have done, just in the cruising 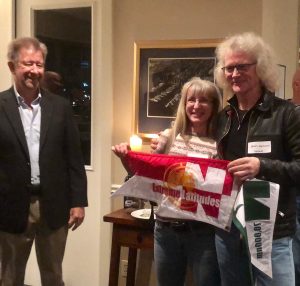 sense, is remarkable,” said Streech, who presented them with their award. “Never mind their website, seminars, and videos. I am humbled by their accomplishments and their vast knowledge of their boat.”

Following the pennant celebration, guests continued to enjoy each other’s company, all reveling in complete glee their connection to one another. “For some reason, this area has the happiest Nordhavn owners on Earth,” said Streech.

Although the Hamiltons certainly stood out as guests of honor, many Nordhavn owner “influencers” were in attendance including video celebs Shawn and Elizabeth Krenke, who own Nordhavn 43 Freedom. And no Nordhavn owners party would be complete without resident rulers of Nordhavn Nation PNW, Kevin and Allison Jeffries. When the celebration was begging for an after-hours locale, the owners of N55 Red Rover saved the evening by leading the remaining hearty partiers back to their boat to continue the libations, fun and stories into the wee hours.

There is a special bond that exists amongst all Nordhavn owners, but what the contingent in the Seattle area have seems to differ in some way from the rest. Perhaps it’s the scenery and cruising grounds, fresh air and the appreciation of a sunny day. Whatever the magic formula is, Nordhavn SW sales manager Don Kohlmann has captured it and used it to help put  together a true family bond that starts with his sales team as well as the service team at Emerald Marine. It was certainly on display this weekend.

The Seattle Boat Show runs this week through Sunday, so there’s plenty of time to see about joining the (possibly) happiest Nordhavn owners on earth.