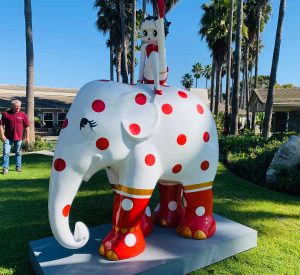 Anyone who has ever had the opportunity to inspect a Nordhavn at the company’s headquarters in Dana Point, California, knows what an idyllic and inspirational spot it is to conjure up visions of ocean travel. Situated at the far end of a point on a peninsula in southern California, the home to Pacific Asian Enterprises, Inc. (PAE) which manufactures Nordhavns, is a former waterside restaurant surrounded by sea life and sailboats. On any given day, you’ll find the encompassing area besieged by paddleboarders, joggers and walkers all out for a bit of exercise and scenery. Now the staff at PAE hopes their landmark location on a go-to route for outdoor trekkers will help raise awareness for wildlife welfare. 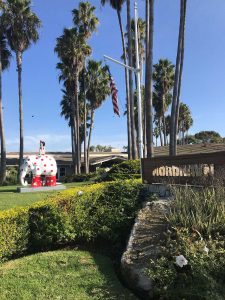 The director of a well-known promoter of environmental causes took note of the high-foot traffic and lush grounds surrounding PAE’s headquarters and deemed it an ideal backdrop to showcase his organization’s message. Elephant Parade, a social enterprise aimed at saving the Asian elephant from extinction and supporting elephant welfare as well as other environmental causes, uses out-of-the-box creativity to spread messaging and gain support for its causes. Through giant sculptures placed around the world, the founders of Elephant Parade seek to use the vividly painted statues to ignite conversations and social awareness – specifically of the plights facing elephants in Asia who suffer from the likes of landmine injuries and poaching.

Last month, a 10-foot tall elephant adorned with red polka dots and the Betty Boop character on its back, arrived on the front lawn of PAE’s headquarters. Nordhavn assistant project manager Philippa Irwin chose the Betty Boop elephant for its lighthearted quality. “I thought this one was fun, bright and stood out from some of the others,” she said. In the weeks since the statue was placed in front of the building, Irwin says people have noticed it and inquired about its meaning.

When PAE took over the old Harborside restaurant back in 2014 and turned it into its headquarters, it also took on a huge koi pond that previously had sat dormant. The pond is now a haven for koi, ducks and other critters and is a draw for passersby. “We always have people coming up to the office because of the pond – it’s incredible how well known we have become (locally) because of the wildlife in there!” Irwin said. “Now, with the elephant statue, there’s something else to look at and serve as another reminder of our precious wildlife.”

As much as PAE/Nordhavn is recognized for producing world class boats, their identity as environmental advocate is equally important. Elephant Parade is just the latest ecological sponsorship endeavor the company has embarked upon, having previously partnered with the Ocean Institute, a non-profit dedicated to ocean conservancy and marine education and 4 Ocean, aimed at ending the ocean plastic crisis.