Following nearly two weeks of testing hulls 1 and 2 of the Nordhavn 41 model, vice president of Pacific Asian Enterprises (PAE) Jim Leishman said he is thrilled with the performance of Nordhavn’s newest model. “The sea trials went really well,” Leishman said. “The boat is everything I had hoped for.”

After putting the first two hulls through the paces, all indications point to the Nordhavn 41 being a very efficient boat, especially when pushed above eight knots. Leishman pegs the boat’s local cruising speed right at 8 knots. At that speed, she burns 4.1 gallons per hour.

The impressive performance can be attributed to a number of factors including increased waterline length and a slightly less displacement. (The N41 displaces 15% less than the N40.) Leishman also credits improved output to the twin engines and the configuration of the props. “You’re not paying a penalty with the twin engines,” said Leishman. In the event of an engine failure the boat can maintain cruising speed on one engine – even into significant wind and head seas.

With the Nordhavn 41 at 8 knots, Leishman along with Project Manager Drew Leishman found the engines to be operating at right around 50% power, precipitating low fuel consumption; good noise levels; and a hearty range of 1,500-1,700 nm. “Those results are pretty perfect,” Jim Leishman said.

Like her predecessor, the remarkable Nordhavn 40, the N41 was built to go long distances and has the mettle and range to do so: for ocean crossings, the N41 has a range of approximately 2,100 nm at 7 knots. When Leishman and members of PAE took a Nordhavn 40 around the world, they averaged 6.5 knots. The 172 days they took to complete the journey set a record for fastest circumnavigation by a production power boat. The N41 at approximately 6 knots burns 1.66 gph and has a range of more than 3,300 nm.

With more than 25 of the first hulls reserved, Leishman said his original vision for the boat is being realized. Yes, the N41 is an ideal entry-level Nordhavn for those getting their feet wet in full-displacement cruising, but Leishman believed she would also be a fitting boat for seasoned cruisers coming out of their big, complex yachts and looking to simplify their lives. At least four N41 buyers are downsizing from bigger Nordhavn/PAE boats.

Like all Nordhavns, the N41 is proving to have a very global reach with about half of the first dozen hulls being sold to international clients thanks to our sales teams in the UK and Turkey.

There’s been considerable interest from both our international and North American buyers taking delivery of the boat directly from the factory in Turkey, cruising the Rhine, Danube and around the Mediterranean before returning her to a major European shipping port, such as Mallorca, and transporting her back to Florida to resume exploring around the Americas and Caribbean.

Video of the sea trial can be found below and new narrated test footage will be coming soon. 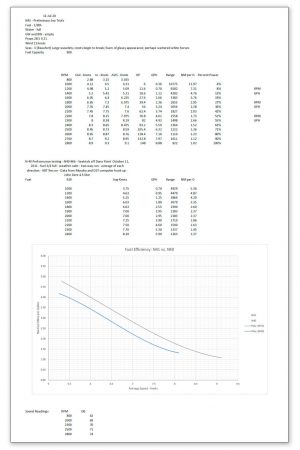 Please note: the performance data of the Nordhavn 41 shown in the graph above were culled from extensive seatrials of hull #1 conducted July 2020 in Turkey. Subsequent testing of hulls #1 and #2 performed in December 2020 off Dana Point, CA yielded the same results.