The Best of 2018
As 2018 comes to a close, we look back at what was another great year for Nordhavn.  Sales thrived to pre-recession levels and owners continued to use their boats as conduits of life change. Parent company, Pacific Asian Enterprises (PAE) celebrated 40 years of continuous business, a milestone made all the more significant thanks to several lean years where we persevered only through tenacity, sacrifice and a little help from friends.

Small achievements and big achievements combined to make 2018 an extra special year, and there were so many of them that it’s impossible to list them all here, or to simply remember them all, for that matter. But we’ve put together a list of some of what we consider the Best of the Best of 2018 – not only so we can look back and remember what a year it was, but as a reminder of all the people  – the ownership group and staff at PAE, the owners and craftspeople at our two partner factories, South Coast and Ta Shing, all of the Nordhavn owners using their boats to the fullest, the vendors whose equipment and expertise help make these boats great, and the thousands of fans, dreamers, aficionados, and  loyalists – who  have made us what we are. We can’t wait to do it all again next year.

January: The selling and buying of Lone Wolf – What made this seemingly innocuous brokerage deal so special is that it beautifully illustrates the cooperation and resolve of the Nordhavn Sales team. Three different brokers worked diligently across multiple continents and time zones to ensure that, in the end, there were two very happy Nordhavn owners.

February: Nordhavn 60#74 ships to Turkey – No, this wasn’t the first time we shipped a boat to Turkey. But the delivery of Nordhavn 60#74 to the shipping port of Fethiye in February, unofficially stamped the Eastern Med as a surefire Nordhavn hub. There have been multiple Nordhavn purchases and sales out of Emek Marin, our Turkish sales and service partner. However, the offload and delivery of 60#74 to nearby Gocek , and its subsequent commissioning, went so smooth you’d never guess the first new boat was shipped there only two years ago. 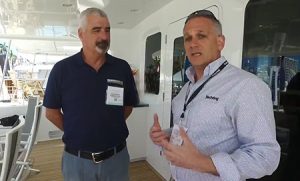 March: Nordhavn 90 Zembra walk-through  – When Yachting Magazine profiled this custom 90-foot Nordhavn at the Palm Beach Show, it was our inauguration into the world of Facebook Live. The 11-minute video quickly racked up thousands of views within the first hours of airing and wound up being one of the most watched video posts on Yachting’s site with over 47,000 views.

April: PAE 40th Anniversary – Four decades ago, a trio of 20-somethings with a love for cruising-style boats, came together to form PAE, a company that would make a historical impact on the world of ocean-crossing sail and power boats. We celebrated this huge milestone with a lavish three-day party, and as the Nordhavn brand continues to set the bar higher with each year that passes, we promise our 50th will be even bigger and better.

May: The Answers to why Nordhavn is Oceans Apart from the Rest– The third installment of the ground breaking “Oceans Apart from the Rest” advertising campaign was issued in May. We challenged other yacht manufacturers to honestly answer a list of   questions we compiled and view as crucial for every boat buyer to know before they invest their money in a boat. 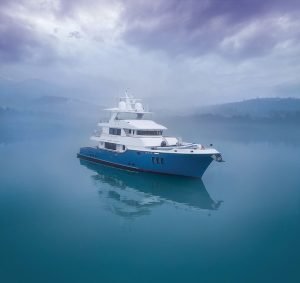 June: The delivery of N100 Serenity – Serenity didn’t just mark the company’s first 100-foot boat, it was the culmination of a true team effort between PAE’s design and engineering unit and the yacht’s buyers. The owner wanted the Nordhavn 75 Expedition Yachtfisher, but with the room of the N96. Naval architect Jeff Leishman was able to present a drawing to the owner’s exact specifications, and the N100 was born. In 2018, Serenity was profiled in articles for seven different boating magazines, and she’ll be vying for a World Superyacht award.

July: NAPS (Nordhavns Around Puget Sound) – OK, yes, Puget Sound isn’t exactly groundbreaking territory, but what’s remarkable about the NAPS group isn’t their itinerary, it’s the fact that in a matter of mere months, new N55 owners (and self-proclaimed big party wall flowers) Kevin and Allison Jeffries conceived of and organized an event that saw the coming together of 15 sets of Nordhavn owners, most of whom didn’t know each other, this past summer in the quaint PNW cruising grounds. The idea, said Kevin, was to get Nordhavn owners together to just hang out and enjoy each other’s company. After all, next to cruising, it’s what Nordhavn owners do best.

August: Client reminds us not to wait ‘til tomorrow – This hardly seems like it belongs on a “best of” list but it had a huge impact on our staff and certainly conveys one of the best reminders about not waiting to live the life you want to live. Our beloved client, Stocky Smith, who was counting down the days until the delivery of his boat, lost his battle with pancreatic cancer. He’d purchased a production spot for a new Nordhavn 56 Motorsailer less than a year prior. He’d come to the Miami Boat Show to have lunch and discuss the build, just weeks before he got his diagnosis. It shocked us at PAE and was a reminder that nothing in life is a given. A tribute to Stocky stated: “A Navy veteran, aviator and accomplished yachtsman, Stocky planned to use the Motorsailer as a

platform to continue his very adventurous life. Unfortunately, as many have noted, life got in the way.”

September: Nordhavn announces 3-D experience and partnership with Vripack – In an effort to place greater focus on upscale interiors and cater to more international buyers, Nordhavn announced a partnership with renowned Dutch design firm Vripack, which have won numerous awards for their work with several large custom megayachts. Vripack offers a Scandi sense of design that differs from traditional interiors but are more prevalent in European style. To kick off the partnership, PAE and Vripack revealed a 3-D experience happening at their FLIBS display where users immerse themselves in the Vripack design schemes via 3-D goggles.

October: The first 59 CP Motoryacht ships – The much anticipated alternate layout of the Coastal Pilot series was shipped to Florida and made its debut at the Fort Lauderdale International Boat Show. The CP’s Motoryacht edition boasts a large aft deck for outdoor entertaining, full-height stand-up engine room, and contemporary three-stateroom interior, which it achieves with the elimination of the Standard boat’s cockpit.

November: Online traffic reports reveal nordhavn.com among tops in visitors – Website analytics revealed that www.nordhavn.com is one of the most viewed websites in the entire marine industry. With 1,600 daily visitors and over 6,500 pageviews, Nordhavn’s website is more popular than some of the biggest boating manufacturer and marine publication websites in the world. (Ed. Note: Nordhavn.com is being revamped with the new website scheduled to be unveiled in early 2019.)

December: PAE formally announces Nordhavn Film Festival – Sparked by the high-caliber Nordhavn videos posted online, PAE announced last week the first Nordhavn Film Festival, a competition to see who can put their best foot forward and turn out the most creative, quality and entertaining Nordhavn video. Submissions are open to owners and non-owners alike with the main criteria being that 75% of the video must not have been previously published.  At stake is a $10,000 cash prize. A black-tie premier of the finalist films will happen in October 2019.