The daily blog of the delivery of N60 “Door Prize”

To learn more about the details of this journey, visit https://nordhavn.com/new-owners-ready-in-more-ways-than-one-to-commence-big-voyage-home/

Note: Due to the boat being out of service range, Devin’s daily blogs have been suspended. Happily, he is back with service and has resumed his posts.

Day 18) Sunday , 11/15
It has been an awesome trip thus far aboard the fair ship @door_prize…Tomorrow morning at 4:00 EST, we will transit the Panama Canal northbound from Panama City to Colon. A very big THANK YOU to my long time agent and friend @tinamcbridetransits for taking such great care of us as usual. For anybody up around 5:15 or 6:15 am EST, you can watch us transit the Miraflores and Pedro Miguel locks at: https://multimedia.panama-canal.com#nordhavnyachts #nordhavndreamers #nordhavnlife #nordhavnsales #nordhavnservice @devinzwick

Underway to Panama!… oh wait, the flopper stopper line chaffed through the night & the sea anchor was lost.
Not having fins aboard, I managed to fashion a single fin out of duct tape & 1/2 a door mat. A couple keel cooler zincs in a bag, tied to my belt sufficed as a weight belt. I was hitting bottom @ 30’, but the visibility was so low that with my limited bottom time the chances of me finding the flopper stopper were extremely low.

Luckily I noticed a building on shore with the dive flag painted on it. A short Google search came up with their

phone number & voila! Daniel with Carlos Scuba came to our rescue. After 45 minutes doing grid searches on the bottom Daniel was our hero!

We just pulled out of Zihuatanejo @ 1000 local. WRI has given us a favorable weather window direct to Panama.

Election post apocalypse. Still no place I’d rather be!

Lazy day of boat chores, scrubbing waterline, troubleshooting 240VAC US Watermaker with @harmonmarineboats back in Anacortes. The previous owner installed an aftermarket media filter with a switch to bypass. The switch was too large for the control box & pulled some wires loose from the control board the last time the unit was pickled. Greg was able to track down the wiring schematic & chat with US Watermakers re: where the media filter switch had been scabbed into the system. Using that info we were able to get the unit wired back up correctly & operational.
This is all good news as we seem to have a phantom water leak resulting in 1/4 tank of fresh water disappearing overnight… and not ending up in the bilge or gray water tank! Hoping it is a sticky fresh water flush solenoid on the watermaker. (Tomorrow’s underway project)

Day 6) Tuesday, 11/3
Election Day… nowhere I’d rather be than anchored off of Zihuatanejo!

Update* we opted to break up the trip further with a stop in Zihuat for one, possibly two nights.

While Zihuat bay is not overly rolly, with the idea of staying here 1, possibly two nights it seemed like a perfect time to go through the theory & operation of the flopper stopper. As with any new system, there is always the learning curve of figuring out which line goes where… it makes it so much more fun when lines labeled GO HERE clearly do not “go there”!

Our Spectra “Newport 400 MK II” watermaker began giving us “prefilter error” codes last night. We pulled both the 20 & 5 micron pleated filters & hosed them out, hopefully this will give us another day of usefulness.

The water temp is 84, air temp is 87… and the 5kts of Northerly breeze is just enough to quickly dry you after a swim. The grill is going, the sun is shining, boat & crew are happy… life is good.

Day 5) Monday, 11/2
Feeling much better after the hopefully 24hr flu. Departed Carrizal @ 930am, enroute for either Puerto Escondido or Huatulco. We will take a look at Escondido’s anchorage.  Weather is still looking favorable for an afternoon of the 7th crossing of Tehuantepec. (We still need to burn 2 days.)

Day 4) Sunday, 11/1
I am a useless waste of space. Montezuma’s revenge took hold late last night while anchored at Chamela.

Today we proceeded to Barra de Navidad where we topped off with fuel. 1500L x ER tank & 180L x fwd tank. This will give us more than enough reserve to come into Panama when the weather lightens down by Tehuantepec.

Tonight we anchored at Bahia Carrizal, just north of Manzanilla. Pretty tight anchorage with about 110 yards of swing room between us, shore & another cruiser, though the holding was good sand in 25’. 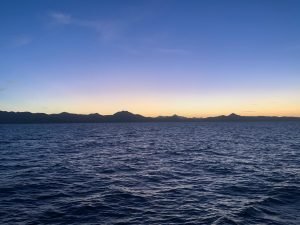 Day 3) Saturday, 10/31 Halloween
Last night’s heat & humidity got to me & I was suffering from bad sleep & worse dreams.
After my 3-6am watch I was able to get another nap until 11am & I opened up the deck hatch further which provided for a much more comfortable rest.

Rick, Kevin & myself plotted an “offshore T-pec” (Gulf of Tehuantepec) route which would bring us almost due south immediately, resulting in a 230nm distance outside of Huatulco at the N end of T-pec & a 380 no range outside of Puerto Madero on the Mex/Guatemala border.

We spoke with Jeremy @ WRI (Weather routers inc) who unfortunately told us this was still a non-viable option as the seas would still be in the 14’ @8sec range with gale force + winds…The professional Recomendation is to delay T-pec crossing until 11/7 in the evening… we could either slow down to a 4kt crawl, or sit in the Huatulco area for 3.5days waiting for the weather to subside. I have opted to slow down slightly & sightsee our way down

the coast a bit. We will arrive & anchor this evening at Bahia Chamela (a bay I have not been to since 2006 aboard the 145’ Westship “Fighting Irish” while I was engineer.) I recall it being a beautiful bay with a big white sand beach, pastel colored houses lining the cliffs with only donkey/walk paths allowing access throughout the bay… I am curious to see what 14 years has brought to this remote paradise.

The plan is to overnight here & then continue down to Bahia Tenacatita (just north of Barra de Navidad) tomorrow midday & overnight there.

We will be doing additional investigation on other small gunkholes to explore on the way south. I am hoping the sightseeing/slow cruise will keep moral up better than slowing life down to 4kts, or arriving to a windy Huatulco to sit/wait for 3-4days. 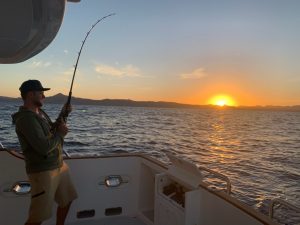 Day 2) Friday, 10/30
I caught a nice nap from 6-830am and then came back on deck to check in with Rick & Kevin as they were setting the fishing gear back out.

Late morning consisted of changing fuel tanks (P to S ER), and giving Rick and Kevin a run down on the theory & operation of the sea chest.

Midday, Rick setup the bbq & grilled burgers (no fish yet), while I finished my first book of the trip and took a 1pm siesta on the fly bridge.

We are currently making 8.3kts@ 1830Rpm, burning 7.7gph. We are about 1/2 way across the Sea of Cortes enroute to the southern end of Bahia Banderas (Puerto Vallarta area). I am hoping the currents improve for us once we are back closer to shore & getting a better push from the prevailing N/S current, vs us crabbing across at an angle currently.

Day 1) Thursday, 10/29
Departed 330pm after the usual Mexican rigmarole & beaurocratic bumps in the road. We had already been delayed a full day due to the port captain opting to close the port for “wind”… while the wind was stronger the day the port was actually opened, it leads me to believe the Port captain wanted to go fishing the day before & keep any competing boats dock-bound in order to up his chances of catching! 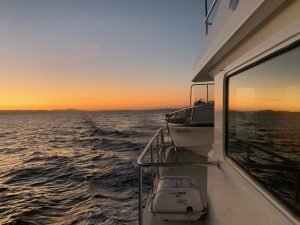 We steamed out of La Paz bay into a 15kt N’erly breeze, and through Canal de San Lorenzo (between Espiritu Santo Island & Punta Las Pilitas on the Very NE edge of La Paz bay. )

Once rounding Punta Coyote & beginning our SE transit of Canal de Cerralvo we began fishing and promptly caught a 4lb Bonita which we released with the hope of letting the first one go for “luck’s sake”… that & I had no intention of using the Bonita for bait & targeting a large Blue or Black Marlin. (My wife had just caught a 250lb Blue a few days before in the same area).

Sunset came in rapidly and beautifully around 7:30.

With a crew of five aboard it was very easy to have a lazy pot roast dinner which had been simmering in the crock pot all day, and then begin our three-hour watches at 9pm. I opted to take the 3-6am watch, and was relieved by Wendy just as the sunrise was making its glorious appearance.