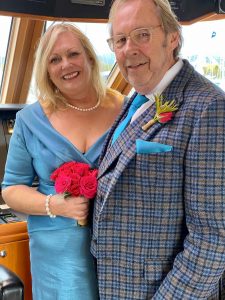 When Norman and Linda Burniston purchased their Nordhavn 56 Motorsailer last year, they knew they wanted to cruise internationally aboard her. And even though it was a love connection the moment they first set eyes on the boat, they couldn’t have imagined they would be exchanging their wedding vows on board.

Last week, the couple tied the knot on Oceane in front of a few witnesses and a picturesque backdrop. We know of Nordhavns that have hosted receptions, but never one that served as the ceremony venue. And why shouldn’t it? After all, it’s the Motorsailer’s versatility that first drew Norman and Linda to her.

The Burnistons had been looking at Nordhavns for years, ever since they saw an N62 floating in the Mediterranean Sea. Like so many Nordhavn clients, the couple were experienced sailors and intrigued by the brand’s promise of comfortable, ocean crossing by power and saw it as a natural step from their sailing ways. Last summer they visited Nordhavn’s European office (NEL) in Hamble Point, UK, which had listed a Motorsailer for sale, and knew in an instant it was the boat for them. “They thought it was a fantastic compromise between sail and power,” said Philip Roach, co-director of NEL.

A pre-owned Motorsailer on the market is rare, and the Burnistons wasted no time with purchasing the former Deo Juvante, hull #9. They re-christened her Oceane, and had big refit plans for her.

The commissioning team at NEL went to work on an overhaul which included installing Glendenning electronic controls with remote thruster control, variable speed Side Power thrusters, navigational equipment upgrades, and many interior shifts such as converting the area that housed the hydraulic TV lift into a wet bar.

With the last of the work complete, the Burnistons’ first plan of action was to bring the boat north to their home in Scotland. But the UK is not known for its mild winters and they waited weeks for a favorable weather window – that never came. They were left having to resort to Plan B. Norman and Linda decided to move Oceane up to St. Katherine’s Dock in London, a less alluring plan, but a plan, nonetheless. “St. Kats” sits underneath Tower Bridge and is a fantastic hub point from which to explore the city – especially during the holidays.

Over Christmas and the subsequent weeks, the couple hosted friends and family aboard, hoping they would soon get the weather report they needed to depart north. Of course, a fate worse than the harshest of conditions struck with the onset of the Covid-19 pandemic. The Burnistons left their beloved Oceane in London and returned boatless to Scotland. With a strict government-enforced lockdown ordered in the UK, spring and summer passed without the couple being able to spend any time aboard.

It had been almost a year since they had purchased Oceane and they’d been limited to only a few weeks of enjoying her, but finally the opportunity came to move her up to her new homeport. The wait had certainly been worth it.

When Norman and Linda started to discuss getting married, they knew it would be an intimate affair. Even so, their ceremony options would be limited as Coronavirus continued to have a stranglehold on the region. But it seems so obvious they would celebrate their love onboard the vessel that – even in such a short time – has brought them so much love and happiness.

And besides being a gorgeous wedding venue, Oceane will also serve as the setting for their honeymoon, wherever they decide that may be.

We wish Norman and Linda calm winds and fair seas, in cruising and in life! Here’s to a very happy journey.