The more N76#17 changes, the more she stays the same 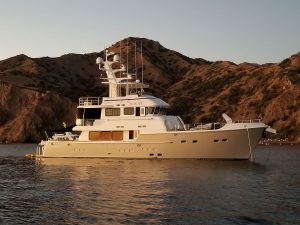 In the summer of 2008, Rick and Debbie Heiniger went to the very first Nordhavn rendezvous, which took place in Bristol, RI. They attended as guests since they did not own a Nordhavn, but by the end of the three-day weekend, they had signed off on a brand new Nordhavn 76. Thrilled to officially be part of the Nordhavn family, the Heinigers spent the next several months overseeing with painstaking care the build and design of their yacht.

The Heinigers are lovely, joyful, trustworthy, giving people and the boat they waited two years for was a reflection of them. Nordhavn 76#17 has gone on to be one of the most iconic boats in Nordhavn history. In her nearly decade of service, she has served as an inspiration, not only to her original owners, but to all her subsequent owners, to the Pacific Asian Enterprises staff and design team, as well as the buyers of other Nordhavn models. 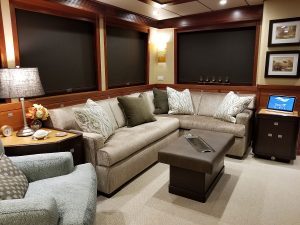 She was christened Eliana by the Heinigers and provided the couple with a safe, capable home and was a gateway to magnificent adventures. But she almost wasn’t to be. The Heinigers signed the contract on their 76 only weeks before the economic collapse. They suffered financially and were advised not to move forward with the purchase. Other buyers were given the same advice and backed out of their contract, but the Heinigers did not. They took drastic measures to make sure their deal stayed intact. That decision played a key role in PAE’s survival of the recession.

The result was the gorgeous Eliana – both a financial and an emotional investment that served the Missouri-bred landlubbers-turned-liveaboards well by honoring their desire for a post-career pursuit they could tackle together. They led her on adventures from Puerto Vallarta, Mexico up to Glacier Bay, Alaska and then across the Pacific to Hawaii. Four years later, just before they were to set sail for Fiji, the Heinigers’ lives took an unexpected turn when a job opportunity (involving one of Rick’s other passions – agriculture) suddenly emerged. Although heavily conflicted, he decided to take it and the Heinigers bid farewell to Eliana. It was time for the wonderful boat to provide for someone new.

After a short time on the brokerage market, 76#17 was purchased by another couple who had prior boating experience, but not in the sort of boat that could take them to exotic places. They traveled throughout the Caribbean and up and down the East coast. They loved their N76, which they called Avedan, and it inspired them to move up to a larger Nordhavn to be cruised further and wider and with more guests aboard. The couple would use Avedan as a springboard of inspiration and pay homage to her in the look and feel of their brand new Nordhavn.

N76#17 was featured in several boat shows – much to the delight of Nordhavn aficionados who recognized her from photos and previous cruising tales online. But in 2016, a lucky couple happened to see her at the Fort Lauderdale Boat Show and decided it was the boat for them. 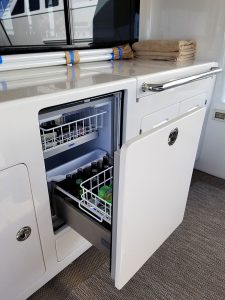 Jeremy and Hilda Anwyl were sailboaters but wanted the additional space – and stability – the Nordhavn 76 would give them. “We’d go to marinas in our sailboat and see Nordhavns,” said Jeremy. “My wife was enamored with them – specifically the galleys as she’s a cook. I liked their look, that they were crazy overbuilt, and knowing that Nordhavn is the accepted standard in boat investment.” They closed on the boat a month later and kicked off 2017 with a 4,000-nm shakedown from Florida to California.

N76#17’s reputation for being the exquisitely capable conduit to her owners’ dreams of cruising adventure preceded her. But Eliana is just as well known as being the boat that became the new benchmark for Nordhavn interiors, steering away from dark, traditional rooms of the past in favor of light, modern rooms that focus on flow, style, elegance and comfort. The horizontal wood grains, light color scheme, textured wall coverings, and stainless steel inlays of the N5901 CP’s interior, selected by PAE’s design team, is a direct riff on Eliana’s interior. “Somehow Eliana was able to exude this interior that was altogether modern and comfortable,” said N76#17’s current owner Jeremy Anwyl. “Her feel is really easy and not at all imposing.”

By the time the Anwyls arrived in San Diego, the boat was showing visible signs of her age. The couple knew she was going to need work, but they put all their ideas on hold until they used her for a good while to figure out exactly what it was that needed upgrading. In late 2017, N7617, now called Seacret, embarked on a nine-month rehab that started with the fabrics: new carpeting was laid in the saloon and master stateroom, sofa cushions were re-structured and the sofa and armchair were re-covered in new fabrics; the coffee table was transformed and covered with an upholstered top, lamps were switched out and new comforters made for the beds. 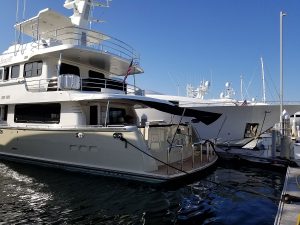 Following the soft goods overhaul, Jeremy began focusing on functional upgrades. A self-proclaimed storage-nut, he added storage to dead places and reconfigured existing storage in other areas. He added refrigerators to the cockpit and flybridge deck, had a customized garbage receptacle built in the cockpit, as well as awning enclosures for the upper deck level and cockpit/swimstep area. Televisions, audio-visual equipment and electronics also underwent major upgrades. 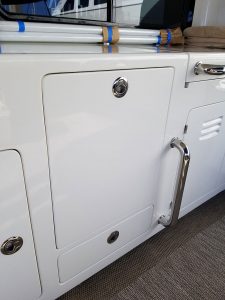 Next week the final big component installation – switching out the cooking appliances for a trio of big commercial grade ovens – will take place and the overhaul will be complete. It’s been a serious undertaking for Jeremy whose specific goal was to ensure the alterations looked like they were original to the build and not afterthoughts. “I found contractors who were willing to take the time necessary to match the curves of the boat, match exactly the cabinetry in the cockpit,” said Jeremy. “Everything needed to be seamless.”

Achieving that look was no easy task – especially when it came to altering the interior structure. “It was next to impossible to clear those cabinets out,” he said. “You basically had to destroy what was there in order to redo it,” which was a double-edged sword. “It reaffirms your confidence in the strength of the boat but if you want to change things it’s a lot of work.”

In order to do the upgrades and installs correctly, the Anwyls needed all the original plans and schematics of the boat and in their research to track down original component manufacturers and paint colors, sought the help of the boat’s original owners, the Heinigers. Throughout multiple conversations, the two couples built up a friendly rapport, leaving Jeremy with no doubts that the scrupulous efforts he has taken to preserve the original integrity of the boat have been well worth it. “This boat was a labor of love for the Heinigers,” he said. “I wanted to respect that and build off of that.”

The funny thing about this story is that it will likely be repeated – in varying iterations – again and again. Owners may change, interiors may be altered, but the mission of Nordhavn 76#17 will remain the same now and for decades to come: to be a strong, capable seaworthy boat that will have an impact on all those who are lucky enough to know her.