This is how Nordhavn owners celebrate Thanksgiving 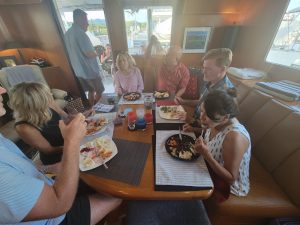 What’s going on right now down in a small Mexican marina just north of Puerto Vallarta is quintessential Nordhavn owner. For the past several weeks, a handful of Nordhavns have been tied up at the Riviera Nayarit marina in the small village of La Cruz de Huanacaxtle, Mexico, and, their owners – staying true to form – have been enjoying each other’s company on a very regular basis. (As if you needed proof, a photo of five couples squeezed around the saloon table on N55 Red Rover was posted to nordhavn.com last week.)

When it dawned on the noodle (as they’re known in Nordhavn circles) that they would all be in the marina during U.S. Thanksgiving, the obvious decision was made to hold a Nordhavn Thanksgiving celebration potluck with Kevin and Alison Jeffries offering up their Nordhavn 55 Red Rover as host boat. More than a dozen owners and a couple of guests from six boats – the sixth Nordy having unexpectedly pulled into Riviera Nayarit Tuesday afternoon and promptly sent an invitation – will cram their way on to Red Rover  this afternoon to enjoy a feast fit for hungry, reveling cruisers.

By the way, the group hasn’t been out at sea so long that they have forgotten Thanksgiving is actually tomorrow. You see, nothing is sacred when compared to a good weather window. Not even Thanksgiving. Five of the boats are due to participate in the Panama Posse and since tomorrow’s forecast promises clear skies and decently calm seas, the quick call was made to bump Thanksgiving up a day.

Red Rover will be joined by N60 Last Arrow and N46 Curandera on the trek south to Panama; the other two boats will stay in Mexico. The trio will be doing what is called bungee cruising, meaning they will be following different itineraries that sometimes has them buddy boating and other times navigating on their own. Red Rover’s ultimate goal is to use this cruise as a jumping off point toward a greater adventure across the Atlantic next year.

But the focus right now is on enjoying a feast and giving thanks for the friends they have made and the boats that have brought them all together.

We at Pacific Asian Enterprises (PAE) are thankful for our wonderful owners, former owners, vendors, fans and friends and anyone else who has been supportive of the Nordhavn brand. We wish everyone celebrating Thanksgiving this year an enjoyable holiday.