Ed. Note: On October 10, 2018, Hurricane Michael made landfall on the Florida panhandle. The hurricane was one of the most destructive storms on record. At least 60 deaths were attributed to the storm system and millions of dollars in damage sustained. All those affected were in the thoughts of us at Pacific Asian Enterprises, and we especially anguished over the safety and well-being of our beloved friends and owners located in the area. After learning everyone we knew was safe, we were sent a photo making the rounds of the internet of a Nordhavn 40 that had appeared to escape the insanity unscathed.) 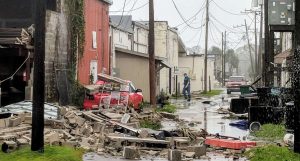 Curtis Low left town on October 9, heeding officials’ orders that residents of Gulf County should evacuate their residences. Forecasters had warned that the hurricane bearing down on Florida’s gulf coast and due to hit in the next 24 hours would be a potential record-breaker. And indeed, it was. Hurricane Michael was the third-most intense hurricane to make landfall on the United States in terms of pressure and had the fourth highest sustained wind speed of all U.S. hurricanes ever recorded. 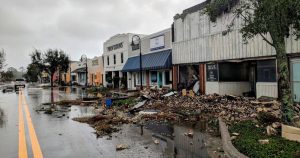 Marcia Low, was already a safe distance away, recovering from surgery in Miramar Beach Hospital, two hours from home. Curtis had to drive more than 200 miles to Gainesville, FL to find a hotel with vacancy. From their individual safe havens, Marcia and Curtis wondered about the state of their beach house, their friends’ safety, and their Nordhavn 40 called Inspiration. They’d prepared by securing the lines, but other than hope and pray, there wasn’t a whole lot more they could do.

“We had no idea the storm was going to be as big as it was,” says Marcia. “Ten-and-a-half foot waves and 160 mile per hour winds is pretty significant.” A day after the system moved offshore, Curtis went back to check on the beach house. It was a complete loss. It didn’t do much for the couple’s faith that Inspiration might have fared the storm any better. 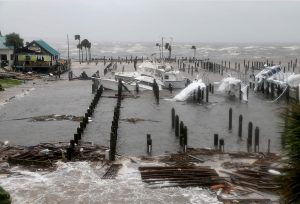 It would be a few days before they would find out. Curtis focused on getting Marcia back to recover at their full-time residence, a house situated further inland. Despite not getting the flooding of their beach house, their main home sustained some damage and they were without phone and internet service for a month.

Meanwhile, their marina, Port St. Joe Marina, seemed to have taken the brunt of Michael’s impact. A photographer snapped a photo of the marina mid-storm, a picture of tossed-about boats and disintegrated docks. Yet smack in the middle was one boat that seemed not to have been bothered at all. It was Inspiration. The photo made the cover of CNN’s website. One Nordhavn fan spotted it and posted it to the Nordhavn Dreamers site. 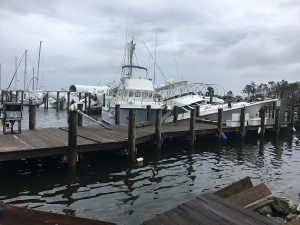 But the Lows had no idea. They received word that boats berthed in Port St. Joe Marina needed to be moved, so they anxiously wandered down to see exactly what kind of arrangements they’d need to make. They arrived to see their Nordhavn had broken free of her slip, but appeared to be in tact with a big cabin cruiser propped up against her at a precarious angle. “We were pretty pleased and shocked to see Inspiration casually floating amongst the debris and other boats,” said Marcia. They took a few photos of their own to document the unbelievable devastation, dumbfounded and thankful. “It’s incredible that Inspiration only suffered a few scrapes and a wet carpet.” 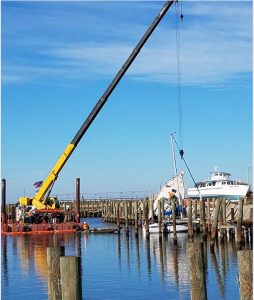 The Lows purchased Inspiration in 2009 to do some “serious cruising” as Marcia puts it. They jumped in with boat feet, having bought the boat from salesman Larry Gieselman in Dana Point, CA, and brought her east through the Panama Canal to Port St. Joe. Cruising has been kept to a minimum with so much time being spent at the beach home, but, thanks to the hurricane, “forced downsizing” will change that drastically.

“We bought our boat because Nordhavns are known for being totally seaworthy,” said Marcia. “It’s clear that the Nordhavn lives up to its reputation.” And Inspiration lives up to her name.