Two down one to go 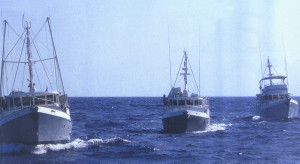 I dwelled for weeks on how I’d fare. Although the first leg of the Nordhavn Atlantic Rally (NAR) was a relatively short hop from Port Everglades, Florida, to Hamilton, Bermuda, I always get seasick during the first 36 to 48 hours of a passage. In addition to seasickness, which I hate more than you can imagine, I didn’t know what to expect from the Nordhavn 57 that I’d signed on as crew. Soft of bilge and slow, she’d be hard pressed to run from a nasty turn in the weather, unlike the high-speed sportfishing yachts that make up the bulk of my experience. So, yeah, I was a little afraid, too.

If the crews of other boats on the docks the day we cast off shared my apprehensions, they didn’t show it. Bevies of crew huddled near their boats engaged in lively conversations about the weather, personal wardrobes, watch schedules, roll calls, provisions and the absolute thrill of setting out on a weekslong journey.

The NAR fleet totaled 18 vessels. The slow fleet (10 boats from 40 to 62 LOA and a cruising speed of 10 knots or slower began its crossing on a clear windy afternoon. I signed on board the Atlantic Escort, a new Nordhavn 57. Our captain was the extremely capable Jim Leishman, one of three PAE partnersthe builder of Nordhavns. We had assigned ourselves the task of shepherding the other nine boats in our group to Bermuda. As I’d feared, the first night greeted the fleet with seas of about 6 feet. I was a little slow to medicate, which, considering my susceptibility to seasickness, makes no sense, so I felt less than great until the medication that Dr. Kevin Ware provided kicked in. I started the regimen with a patch and pills. After a few days, I was able to wean myself off the pills.

During the first 24 hours at sea, the crews and the equipment made peace with their lot in life. Everyone aboard our boat easily adapted to the watch schedule of two hours on and six hours off every eight hours. The first day’s mechanical issues among the fleet of trawlers related to fuel and stabilizers. At approximately 1 p.m. on day two, after having enjoyed a fair current of 3 knots in the Gulf Stream, we adjusted our course to a more easterly direction. Our heading was now straight for Bermuda. We had received our course from the landbased team, which had calculated it after studying the weather and currents. One member of the fast fleet chose to cut the corner and head straight for Bermuda. He ended up behind the entire fleet, even though the course he’d plotted was shorter.

Twice daily, at 0800 and 2000, the fleet took a roll call, which established a bond of security among the members of the rally. In the evening when the fleet spread out, watch commanders relied on the radar to keep tabs on the position of each yacht. Night also opened a floodgate of radio.chatter among the fleet. By day, the thread of radio transmissions switched to requests for parts to be sent ahead to Bermuda. Each watch checked the engineroom, monitored the gauges and radar. PAE’s Justin Zumwalt, bless his foresight, had made arrows of blue tape on the instrument panel to show where the pointer on each gauge should be when the systems were running fine. A quick glance, night or day, told us all was well-or not. My finest day at sea actually started with dinner on day four. As darkness fell, the moonless night just glowed with more stars than I have ever seen in my life, and I stared skyward with my mouth wide open in awe. I took my sleeping bag to the flying bridge and slept topside.

Dawn brought oily seas and calm winds, and the Atlantic Escort launched both its tenders by 7 a.m. We hoisted the 14foot Caribe off the boat deck abaft the flying bridge and the smaller Achilles from her perch in the cockpit. First, the photo crew set out to take running photos of our fleet. Later, we filled the water tanks aboard the Nordhavn 50 Four Across.

Many of the crews began to see more and more marine life-turtles, whales and a free-swimming marlin among the species-because the slick surface revealed the slightest ripple. Aboard Atlantic Escort, Jim and I trolled lures in 17,000 feet of water and later took a break to troll Justin, an accomplished surfer, on his surfboard.

As you may have guessed, tight quarters and tighter personalities led to some tensions among the rally fleet. The inevitable mix of by-the-bookers, jokesters, laid back-types and a few wannabe admirals spawned conflicts about ranges and courses and who was to lead the pack. In the same way that exchange students help differing cultures understand one another, though, exchange crews eased the taut ambience aboard some of the yachts. We transferred the crews via the tenders, and found them refreshed after the change of scene. Fishing was one of the best and most popular diversions among the fleet. Egret’s owners are avid fishermen and that afternoon they hooked a very large fish and fought it hard until it sounded and parted the line. The next day, they battled an estimated 300-pound marlin, but ultimately lost the war to the Nordhavn’s starboard stabilizer.

Aboard the Escort James (Jim Leishman’s son), Justin and photographer David Shuler caught dolphins of a respectable size. One 18-pounder was quickly dismantled into single-serving pieces that tasted wonderful grilled on the barbecue and served with rice and beans.

By day six, the two fleets drew closer together and communication via VHF became possible. The airwaves buzzed as friends caught up with one another’s tales of the passage. As we approached port, the relief of making a successful passage and the feeling of accomplishment that went with it fueled everyone’s excitement. So did the preparations aboard each yacht. At 0400 as we raised Bermuda, we hoisted the flags and filled out customs documents. The Bermuda harbormaster made contact with our lead vessel and began the process of documenting our 18 vessels in a polite and timely manner.

At the concrete dock of the Royal Bermuda Yacht Club, the full PAE support team greeted us. Milt Baker, part of the PAE advance team, did a super job of attending to every last detail.

My time on the open ocean left me with a new appreciation for what recreational cruisers can do. It gave me time to reflect without the intrusions of day-to-day life-something that rarely happens, even on vacation. You don’t have to cross the Atlantic to discover the joys of passagemaking, but there axe horizons farther than the town marina.