The Nordhavn Distance Pennant Program reached a milestone earlier this week with the 500th Nordhavn owner registering their miles traveled. Created in 2008 as a way for Nordhavn owners to show off their stripes, the program has racked up an impressive 7,143,000 nm. Certainly, Nordhavns have many, many more total miles under their keels with more than 600 boats having been built and cruising the globe, but this total – incomplete though it may be – is nonetheless impressive.

Owners earn pennants by registering their miles in the Distance Pennant Program (DPP) data base. Pennants are awarded after reaching 2,500 miles and 5,000 miles and then in increments of 5,000 from there. Additionally, owners who have circumnavigated or reached extreme cruising grounds (above 30 degrees N or below 30 degrees S) receive special pennants. 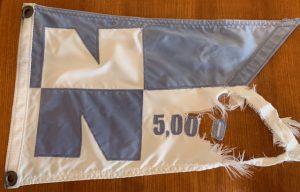 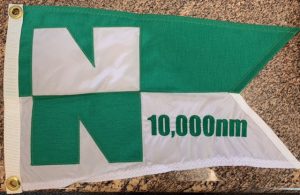 Nordhavn 62 Bill Baker is one of six boat owners who earned a new pennant the past month. “Each day I record my ending miles in the logbook and there is a sense of accomplishment,” said Baker. He and wife, Emmy, received their 10,000 nm pennant a few weeks ago – and just in the nick of time. The 5,000 nm burgee that flew proudly on their bow as they logged miles traveling around Australia, Canada, and the U.S. west coast, was falling apart at the seams. “I leave my pennant up as I cruise so it earns the miles also,” he said.

It’s almost as though having an old shredded Distance pennant to retire is itself as significant as reaching the next milestone pennant. Nordhavn 43 owner John Cavanagh calls it an important part of the DPP. “Flying that pennant gives an authenticity to what you’ve done,” he said. “It lets people know that you have experience.” Cavanagh and wife Lynn’s experiences have come from cruising the west coast U.S., going through the Panama Canal and venturing the likes of Panama, Columbia, and the San Blas islands. Their 5,000 nm pennant was lost in a squall off Costa Rica so they replaced it with a standard Nordhavn burgee, which Cavanagh describes as having since become “embarrassingly battle hardened”.

For cruisers like Baker and Cavanaugh, the meaning behind the pennant is obvious, but for others who do not own a Nordhavn, it’s almost as though it represents a secret society which they are not a part of. When Baker explained its significance to a friend who has a 70-foot cruiser, the friend in return said: “It means you are a boater and I own a boat.”

The simple flag with such a big message says as much about the boat as it does about the owners who fly it. It’s a reminder of the places that are accessible to Nordhavn owners and few others, the rough seas confidently handled, and the motivation for adventures to be had. ”It is a symbol of durability and safety but it is also a symbol of the adventurous spirit shared by all Nordhavn owners whether they travel the world or stay in one region,” said Baker. 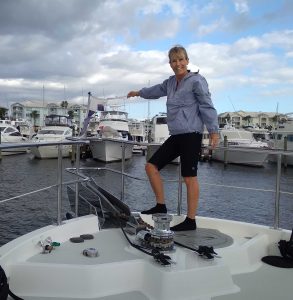 The latter part of his sentiment is an important one, and could be part of the reason the DPP has only captured its 500th owner instead of every owner. The program is about the people who use their Nordhavn in any manner, not just those who travel to the furthest corners of the world, but both Baker and Cavanagh fear owners whose mileage or destinations don’t seem as ambitious are less inclined to post to the data base. Even Cavanagh admits to not participating in the program until he and wife, Lynn, began making more serious passages. Baker, however, is an advocate for owners to post any and all miles, regardless of the grounds. “In reality, most people cruise predominantly in their home waters,” Baker said. “This makes them experts in a local area and world cruisers will benefit from their knowledge.”

Besides that, sometimes an owner’s most aggressive cruising comes in their backyard waters. “Owning a Nordhavn gives you the confidence to go anywhere,” Baker said. “Just because you don’t cross oceans doesn’t mean you aren’t a capable or confident boater. Some of my most ambitious boating has been done in local waters. Every mile, no matter where it came from, is well earned.”

…Which is the beauty of the Distance Pennant. Behind every amount, from 2,500 to 100,000, there is a story that exists, begging to be told. Cavanagh sees it as the ultimate ice breaker. Without saying a single word, the pennant gives other Nordhavn owners a glimpse into one’s cruising history. Cavanagh flies his recently earned 25,000 nm burgee and invites people to ask him about the experiences behind the miles. Additionally, he hopes new boaters see it as an opportunity to use him as a resource or a source of inspiration. “It’s what I do when I see other people’s pennants,” he said. “I look at someone who has logged in one hundred thousand miles, I want to talk to them.”

Even with about 610 Nordhavns floating around the world, the Nordhavn owner is a rare breed. Perhaps that’s why they are such kindred spirits, connected simply by the track record of their yacht brand and by their own potential. The Distance Pennant takes that connection to the next level. “You know when you see someone else’s miles, they have also been in rough water, seen beautiful sea life and stayed in some amazing places. I feel pride in knowing that I have done that also,” says Baker, then adds, “I’m already working on my next pennant!”

The answers to why Nordhavn is Oceans Apart from the Rest