Yes, now is a good time to explore the world

The owners of Nordhavn 64 Gratitude prove that cruising, like life, is what you make of it.

With the Omicron variant, warnings over travel, and spiking COVID infection rates taking over the news cycle, Nordhavn owner Laurie Thyrre understands why many believe this is no time for world cruising.

She understands it, but she doesn’t believe it. 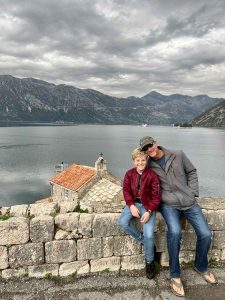 Right now, Laurie, husband Alec, and son Jack are all huddled on board their Nordhavn 64 Gratitude in Montenegro, where they flew to a few weeks ago, getting ready to spend Christmas and the ensuing winter months. The family has been cruising for 3 ½ years, and crossed the Atlantic in 2019 with sights set on Europe first, then the rest of the world. Although it wasn’t the intent, COVID forced them to stay in Europe for more than two years until they were finally able to fly back to the U.S. in October. They planned for six weeks in the States before returning to Porto Montenegro and weren’t sure they would even make it back to Europe until they were sitting on the plane buckled in their seats; several days before their flight, Montenegro had been added to the EU “red list”. But for Laurie, there were no thoughts of turning back. “The experiences one has in life are, I have found, entirely of their own making whether in a pandemic or not,” she said. “There are countless people who are waiting for the perfect time to buy a boat, leave on their great explore, get married, have children, etc.

“But there will never be a perfect time to do anything in life.”

In fact, Laurie will convince you that the opposite is true: life is the time to do things that will be perfect in the moment. And navigating through this dicey period has allowed the Thyrres to do exactly that. 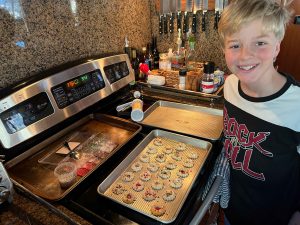 When it comes to the holidays, celebrating in Montenegro this year is no less safe than anything they might be doing back at their U.S. base of Stuart, FL. Montenegro will be the third place in four years the family will be observing Christmas. This year’s will be a typical spirited celebration which includes hosting a Christmas Eve cocktail party for 8 (plus Jack) on board Gratitude followed by presents in the morning and the same group gathering for Christmas dinner out. Then the three Thyrres will celebrate together with a Boxing Day dinner on the 26th. Depending on circumstances and location, it’s occasionally necessary for Santa to delay the arrival of some presents, but it just stretches out the holiday, laughs Laurie. This year, they will have a second Christmas to enjoy on January 7th when the majority of Montenegrin Serbian Orthodox Christians celebrate. Another bonus to being in Montenegro for the holidays: “We have snow!” Laurie says. 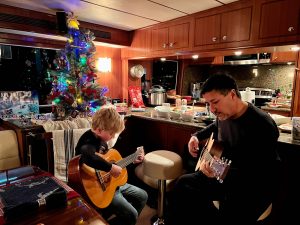 Thanks to comparatively low rates of infection in Montenegro and the availability of vaccines, staying there offers normalcy. It was a far cry from where they were a year ago in hard-hit Italy. With a non-stop cruising itinerary for most of the year, the Thyrres like to take a breather over the winter months. It allows them to catch up on school work, routines, plan for the next year and ensconce in the community that wintering in a marina allows for. Plus this time of year isn’t optimum for cruising Europe. 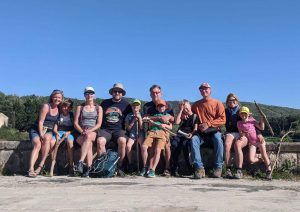 Last year they were in Italy for summer and into fall when the country went into total lockdown, which meant Gratitude stayed put for winter and the foreseeable future. There were no cafes open and movement from city to city was restricted. “But we absolutely thrived,” says Laurie. They befriended a local family who gave them Italian lessons, learned how to cook pasta and other specialties via Zoom from a Tuscan chef, and watched Botticelli perform in the famed opera house online. They had to celebrate Christmas just the three of them, but had opportunities to gather with friends for other holidays outside of lockdown. “We were in a marina with several like-minded families and had a solid community around us,” she said. Many of those friendships continue today. 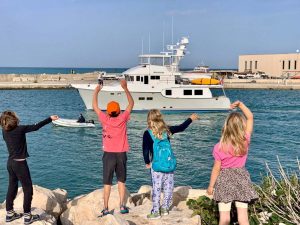 Of course, the trick to cruising in less than ideal situations is not to throw complete caution to the wind, but to do it smartly. The Thyrres watch COVID trends and vaccination rates of areas they hope to visit. The Omicron variant hadn’t been discovered until they were safely back on board Gratitude but knowledge of it wouldn’t have impeded their plans anyway. Instead they stick to a methodical approach of going about their days and digest the current information available to them. Since 11-year-old Jack was only able to get a single jab while the family was in the U.S., he is more susceptible to the virus. This means visitors on board are limited to those who have been vaccinated and precautions are taken when off the boat. Laurie is hopeful vaccines will become available for Jack’s age group in Montenegro soon so he can receive his second dose.

When considering the cruising they have done the past three years in Europe, Laurie embraces it with a Zen “it is what it is” philosophy. “Who can say if [our experiences] would have been better or worse without a pandemic?” she muses. “I can guarantee you that being here is better than being anywhere else for us because this is the life we worked for and worked toward and it [is] perfectly imperfect for us.” Destinations that were originally planned for – the Baltics in 2020 and shipping the boat to Thailand this year – differed significantly from the actual places that wound up comprising their itinerary, resulting in radically different adventures. Still, Laurie insists, “None of us would change it for any other experience.”

“My best friend has a saying, which we have cited countless times: ‘The plan B is usually better anyway.’ We have added that Plan C and Plan D are better still.”

Want to learn more about the Thyrres’ cruising life on board Gratitude? Follow their blog at cruisingwithgratitude.com.